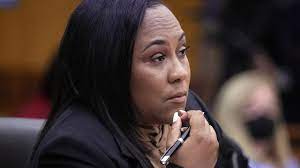 If you let me editorialize a moment, Fanni Willis should be attorney general, and Merrick Garland should still be a judge on the DC Circuit Court of Appeals. Trump’s place was searched (not raided, that’s MAGA talk) in August. A few weeks after the mid-term elections, Trump jumps into the “race” for president, and soon after, Garland plays along and grants Trump his Christmas gift. A special counsel. We were promised that the special counsel wouldn’t delay anything. It has delayed things, significantly. Jack Smith is subpoenaing more witnesses and documents, and here we go again.

Not Fanni Willis. She empaneled a special grand jury to authorize a report to the judge overseeing the district, and now she’s about to move. Want to know why? Because Willis didn’t fck around. Unlike Garland and Congress, WILLIS got Meadows deposed. She got Lindsey Graham – who has his own phone call troubles in Georgia – to testify. She stood up and got it done.

Now she could file a RICO, racketeering charges against Trump, and, according to Georgia State law professor Clark D Cunningham, Willis has done it in prior cases where it didn’t seem obvious. From The Guardian. RICO statutes in Georgia are far broader than the matching RICO statute under federal law:

“Among the things that are considered racketeering activity in the state of Georgia is knowingly and willfully making a false, fictitious or fraudulent statement or representation in any matter within the jurisdiction of any department or agency of state government,” said Clark D Cunningham, a professor of law at Georgia State University. “If you do that, you’ve committed a racketeering activity. If you attempt to do that, if you solicit someone else to do it or you coerce someone else to do it – it’s all considered racketeering under Georgia law.”

Georgia’s Rico Act, which dates back to 1980, can be used more broadly than the more strict federal Rico statute, Cunningham said. Prosecutors can bring charges under many different state and federal laws to allege a pattern of misconduct, and convictions carry a penalty of up to 20 years in prison.

And better yet? Willis has a lot of practice in this area. She has secured three high-profile prosecutions before and:

In a recent interview with the Washington Post, Willis praised the utility of Georgia’s law. I have right now more Rico indictments in the last 18 months, 20 months, than were probably done in the last 10 years out of this office,” she said.

If you think about the “pattern” of lying that Willis could establish (With only one activity needing to happen in Georgia or to a Georgia agency,), Willis herself could bring Trump down for a lot more than one phone call to Brad Raffensperger.

The RICO act in Georgia allows one to be sentenced to up to 20 years. Fanni Willis should be A.G., and Garland should be where he is more comfortable, a judge in the DC Circuit, where no one gets hurt.
****
[email protected], @JasonMiciak, SUBSTACK: FBI COUNTER INTELL ARREST IS LESS A PROBLEM FOR THE FBI THAN IT IS FOR TRUMP