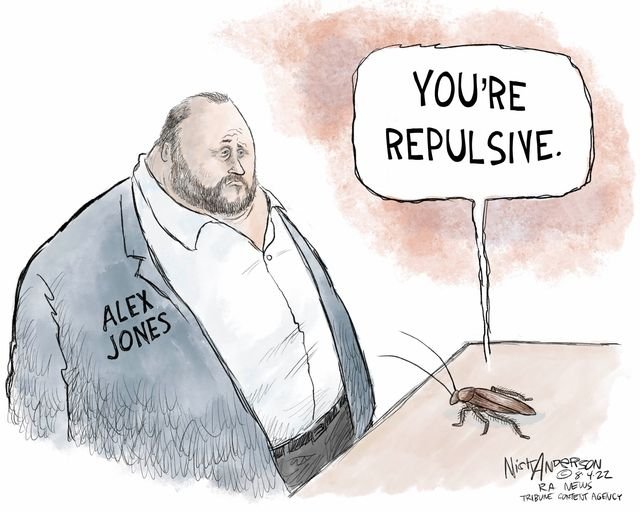 I remember one time seeing an extraordinary chocolate sundae. It had layers. It started out with a layer of rocky road ice cream, then there was a chocolate mousse ice cream on top of that, Then actual hot fudge and all this was stacked on a brownie.

The clip you’re about to listen to is like the sundae, except imagine different kinds of shit. If we start out with bullshit and then add a layer of horseshit, and then top it off with chickenshit and slap it down on a meadow muffin, you’ve got the idea.

Alex Jones co-host Owen Shroyer said he heroically saved someone’s life leaving the courthouse today: “The whole thing is on video. But Alex said he doesn’t want to put the video out because he feels like people would say he’s exploiting .. the attention.” pic.twitter.com/dgxRZvHb5O

Alex Jones heroically saved someone’s life. Alright, class, time for a quiz. This will give you the idea.

I heard that somebody jumped from a window and Jones lay down on the sidewalk and the person bounced off his belly and was saved.

Start all your replies, “I heard…”

I’ll see your best efforts in the comments below.

I don’t know where Jones found his co-host, or stand in, or whatever TF this guy is, but he is a washout. And the church windows? Last time I saw Infowars, the set looked like the reception room in Hell. Where in the known or unknown universe was this absurdity filmed?