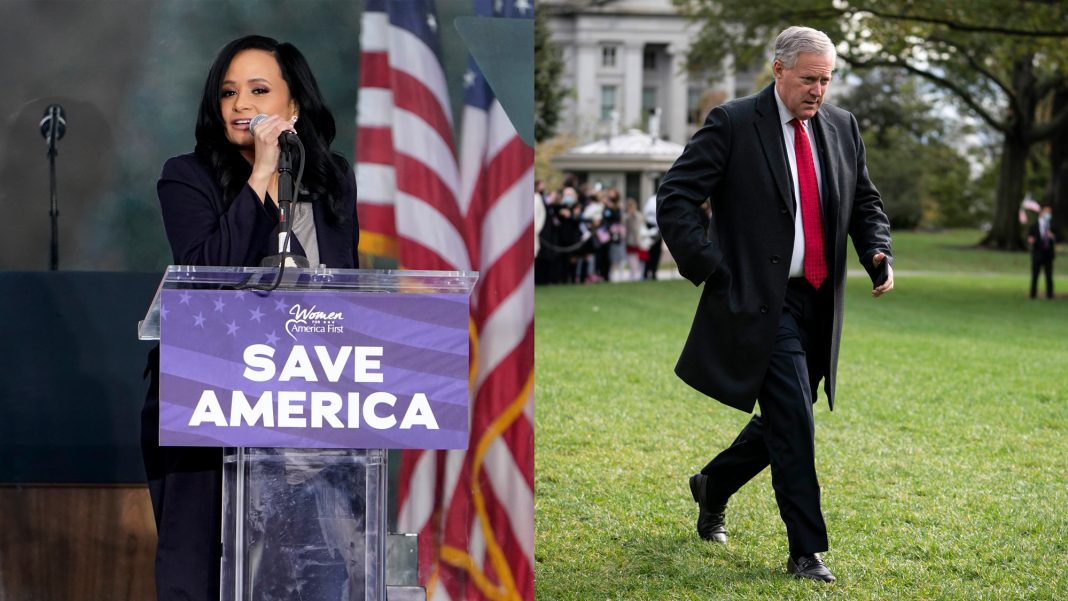 Mark Meadows is to Trump world and the Capitol riot what Rome was to the ancient world. All roads inexorably lead there sooner or later. Meadows may well end up being the linchpin in the January 6 investigation. He’s been dodging the J6 Committee for some time now, but all that that has achieved is that the Committee interviews other people and they tell the Committee what Meadows did on such and such occasions.

Scott Johnston was an aide who worked on the team that planned the Trump rally at the Ellipse on January 6. He claims that leading figures in the Trump administration and the Trump campaign deliberately planned to have crowds converge on the Capitol. Their idea was to make it happen and “make it look like they went down there on their own.”

Johnston says he overheard Mark Meadows and Katrina Pierson, a bullet-necklace clad Trump surrogate from way back, talking to Kylie Kremer, the executive director of Women For America First, about plans for a march to the Capitol. Johnston said the conversation took place on a speakerphone in the car as he drove Kremer between rallies in the last three days of 2020.

According to Johnston, Meadows, Pierson, and Kremer were discussing the idea of obtaining a permit to march from the Capitol to the White House and thereby make it official. That was discarded early on. Meadows, Pierson and Kremer said it was a bad idea because of the bad optics for Trump of organizing a march on the Capitol when the votes were being counted plus there were a lot of security costs involved. They decided a cheaper, less problematic way would be to “direct the people down there and make it look like they went down there on their own,” and that’s what Johnston told Rolling Stone:

Kremer’s group, Women For America First, helped lead the Jan. 6 rally at the White House Ellipse, where Trump delivered a speech and told supporters to “fight like hell” and said he expected them to march on the Capitol. “We fight like hell. And if you don’t fight like hell, you’re not going to have a country anymore,” Trump said. As Trump spoke, people began leaving the rally to walk towards the Capitol.

The president’s camp insists this wasn’t part of any pre-planned push. In the book where he recounted his time in the White House, Meadows called the Jan. 6 violence “the actions of a handful of fanatics across town.”

Nobody ever thought that. Meadows was indulging in wishful thinking if he believed otherwise.

Johnston’s account suggests there was a deliberate strategy by Trump’s allies to have supporters descend on the Capitol. Such a connection would implicate top White House and campaign officials in drawing crowds to the Congress without a permit — a step that could have required added security and may have allowed law enforcement to better prepare for the day’s events. Those crowds overwhelmed the Capitol Police and engaged in an hours-long battle with law enforcement. Four people died during the attack. […]

The committee has subpoenaed Meadows, Pierson, and Kremer. In a letter that accompanied those subpoenas, Committee Chairman Bennie Thompson (D-Miss.) indicated his interest in communications the Kremers had with Meadows. Thompson also indicated to Meadows that the committee is interested in the role Trump’s former chief of staff played in planning the Jan. 6 events. “It appears that you were with or in the vicinity of President Trump on January 6, had communications with the President and others on January 6 regarding events at the Capitol, and are a witness regarding activities of that day,” Thompson wrote. “Moreover, at least one press report indicates you were in communication with organizers of the January 6 rally, including Amy Kremer.” […]

Johnston said that, in his committee interview, the investigators were specifically focused on whether Meadows knew about plans to have a march on the Capitol. This questioning left Johnston with the impression that other witnesses testified the former White House chief of staff was involved in plans to have crowds go from the Ellipse to the Capitol. “I don’t think I’m the only one that’s told them that he knew about the march,” Johnston says of Meadows.

“Mark Meadows and Katrina Pierson,” Johnston says of the investigators, “that’s the two they’re going after.”

That sounds about right. And I will repeat again something I have said before. Mark Meadows is not going to go to prison for Donald Trump. You can take that one to the bank. Once the J6 Committee has Meadows where they want him, then we’re going to know all that we want to know. I honestly believe that Meadows is the key. It’s possible that testimony will reveal somebody else is, possibly Rudy Giuliani, but it’s going to be one of those two.

Giuliani, as you may recall, was going to cooperate with the Committee and then, true to form, decided against it and came up with some cockamamie legal reason to not cooperate, such as that the Committee had no right to subpoena people. It was pure nonsense and melted in the light of day like the rest of Giuliani’s post 9/11 great ideas.

Maybe Giuliani will be held in contempt of Congress as well. And perhaps that is where Meadows is going, too.

Meadows is the key.