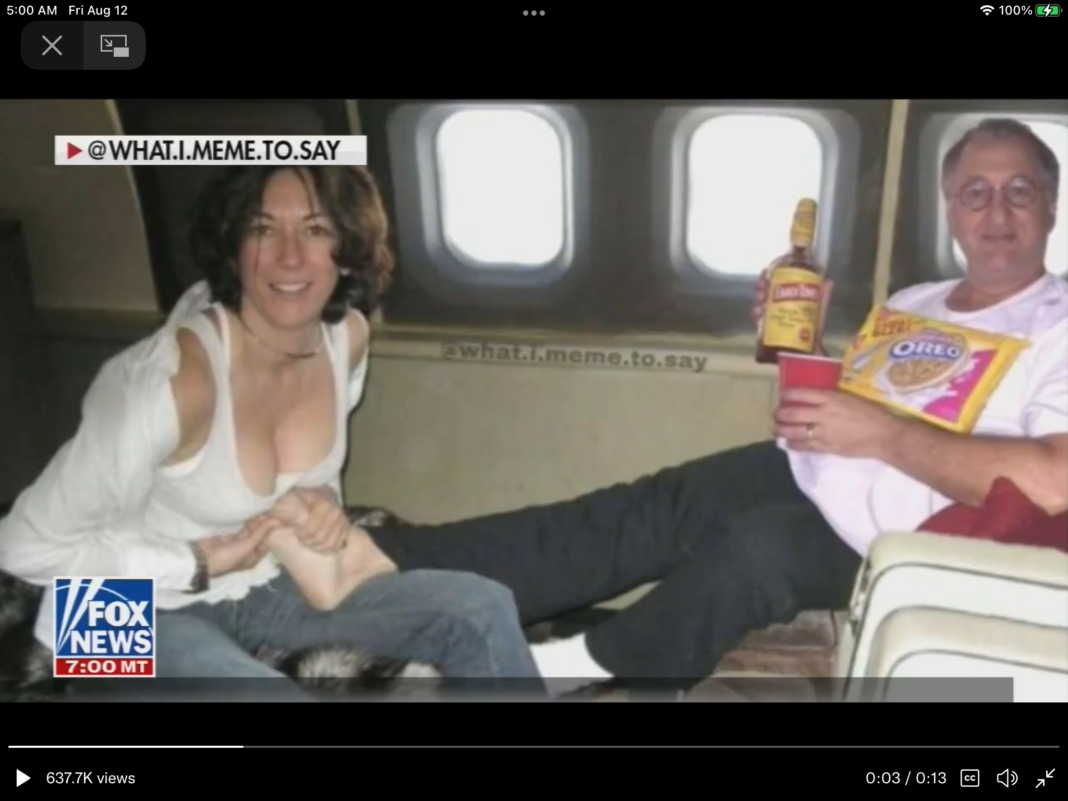 Last night, while substituting for Tucker Carlson, who has been MIA since the news broke that his buddy Alex Jones’ phone is in the hands of the J6 Committee, Brian Kilmeade, substituting for him, broadcast a clearly marked photoshop job of the judge who approved the FBI search warrant on Mar-A-Lardo as if it were authentic…

The meme, which originally was meant, of course as a joke, and whose creator doubtless never thought would be presented on a major Fake News outlet as authentic, was created using a photo of Ghislaine Maxwell and Jeffrey Epstein…

"He likes Oreos and whiskey!"
WTF
Kilmeade describes it simply as "a picture of Bruce Rinehart" — though the judge has clearly been Photoshopped into this actual photo of Ghislaine Maxwell and Jeffrey Epstein. pic.twitter.com/bCRYfqFxie

Now, I’m not going to get all high and mighty here and attack the meme’s creator, whose political opinions obviously differ from mine, because our taste for tacky, badly created photoshopped hits on those who have real power over our lives clearly align.

But to present said photoshop on a program that many millions of idiots go to for real news, and to present it hastily and matter of factly as if it were authentic and not just for laughs, should result in a certain network having its broadcast rights pulled by the FEC.

Here’s one that is ready for the NBC evening news…

After a slight improvement by me…

Hey @FoxNews y’all are begging for this suit and deserve everything you lose from it!

@kilmeade won’t stop until someone is seriously hurt https://t.co/MxbEquAXhB

Hey, if you’re gonna spread dangerous misinformation, at least have the copy in the teleprompter.

Of the of the of the aaahh of the…Brian was so close to almost not playing along but tomorrow is payday. @kilmeade https://t.co/M5Yg8ROLIg

Not just the credit lmao pic.twitter.com/dsdRiYupVk

They really don’t care at this point.

They know it’s fake. They know by the time they retract and apologize, their mission to plant disinformation would be accomplished.

Maybe the most horrific media error I’ve ever seen. It’s one thing to damage Dominion, a corporation. But this a public servant’s life, and Kilmeade and Fox have clearly sicced the most disturbed of their viewers on this judge.
They should be apologizing every hour for a week.

At what point do they get held accountable for this. It's worse than RT at Fox News at this point.

Wait, weren't these the "let justices eat steak in peace" crowd a month ago?

But that was their judges.

The goal here is obviously to browbeat, or even to cause real physical injury to public servants who don’t share Fox News’ agenda.

If they want to do a satire/comedy during Tucker’s hour it will be badly done and I will have the prerogative not to watch.

But they should not be allowed to present this crap as News.