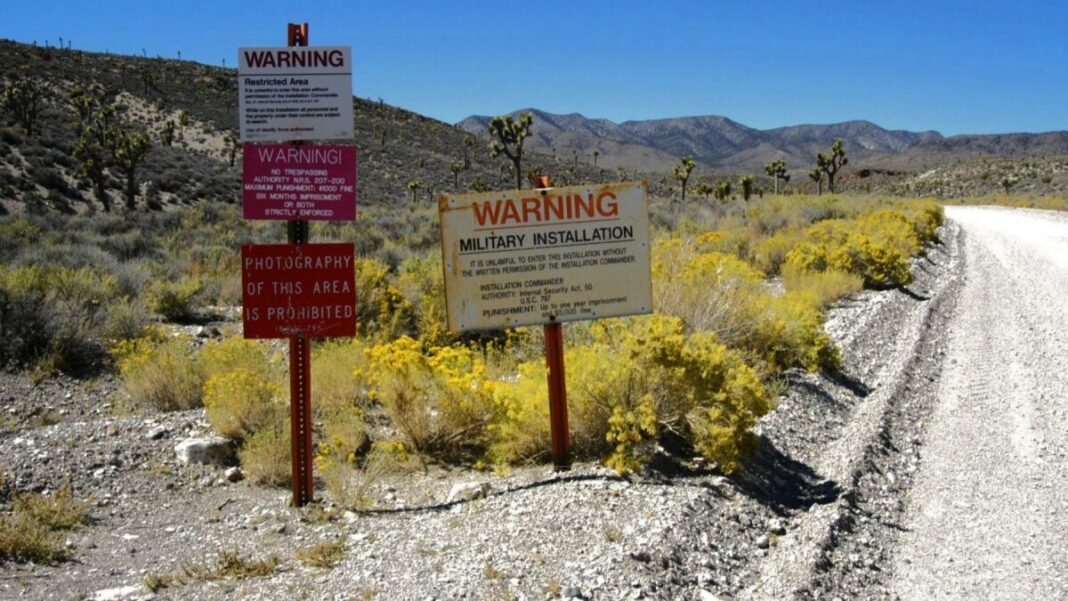 This 60-year-old retired software developer, Joerg Arnu, sounds like a great guy to have a beer with. He lived in Rachel, Nevada, known everywhere as “Area 51 Town,” and he had a two-decade-old blog on Area 51. It is not like he’s hiding anything. He sees what he sees, hears what he hears, and puts it in his blog.

So, why did this happen? From Gizmodo

Shivering from a lightly falling snow, he was placed in the back of one of the vehicles, while over a dozen agents from the FBI and the Air Force Office of Special Investigations—the Air Force’s secretive counterintelligence wing—poured into his home. Not long afterwards, agents started asking him questions. One of the first things they wanted to know was: “Are there any booby traps on the property?” To Arnu, it seemed like a pretty weird thing to ask. A retired software developer and self-admitted senior citizen? Did that really sound like somebody who would boobytrap his own house?

Well, he would have a really good issue on appeal. It is illegal for the military to participate in civilian law enforcement and since this didn’t involve anyone enlisted and they weren’t guarding the base, they should not have been there. The Air Force people were surely there in case they found what they were looking for. They never found anything, even though they also searched his second home in Las Vegas, where his girlfriend was staying, and went through the same scenario. They didn’t find anything, which doesn’t mean that they didn’t take anything.

Well, they didn’t write down that they found anything, but that’s okay because most of it wasn’t “written down.” Pages of the warrant were “classified.” They did take everything electronic:

The biggest loss that the blogger suffered, however, was the assets that police seized during the raids: approximately $20,000 worth of electronics, according to him. This included five computers, multiple phones, external hard drives, digital cameras, and an expensive drone, among other items.

Imagine living online and then having all your devices taken. It almost gives me the willies just thinking about it. Additionally, the article I’m attaching was written two months after the fact, which is more than enough time for “special intelligence agents” to search for something nefarious. Keeping them at this point feels punitive.

Arnu says that the raid is meant to “chill” the whole ‘Area 51 research community, which sounds right. Arnu doesn’t even believe in UFOs. He thinks the UFO stuff is to cover new military weapons and planes. The two aren’t mutually exclusive. I have seen interviews of old guys that worked there who talked about “the flying bathtubs.”

However, Arnu maintains that he never broke the law and that the government’s case against him—whatever it is—has zero merit. “I had some photos [on my website] of Area 51 that were about two years old,” said Arnu, which he believes were the reason for the raid. “They were legally obtained. There’s absolutely nothing illegal about them,” he said. “Most of these photos were not taken by me, I just published them [on the site].” He adds that they were “not classified photos” and that they “were not taken from inside the boundary”—that is, the area inside the perimeter of the base that is off-limits to civilians. Arnu says the photos had already been widely circulated on other news websites and TV shows, making it inexplicable why the government would target him and him alone.

Arnu believes they wanted to shut him up and also just wanted to fish through his stuff. He doesn’t know the probable cause of the search because it, too, is classified (of course). This guy has the makings of a large lawsuit.

Michael German, a former FBI agent who has been critical of the bureau since leaving it, called Arnu’s case “troubling.”,,, “Certainly it [an operation like this] could intimidate other journalists who were writing about these secret government programs. That chilling effect seems to be part of why they would be so aggressive in a case where the level of dangerousness is not clear,” he said. On top of this, German notes that the targeting of Joerg’s computer equipment “raises concerns that the intent may have been to impede his ability to exercise his First Amendment rights.”

As I said, two months is plenty of time to search through any device. If he had anything, they would have arrested him by now.

So there it is. Kind of terrifying, isn’t it? For two decades, he only reported on what he saw, heard, and read, none of it illegal (We can tell because he hasn’t been charged and he’s not Trump. Regular citizens don’t get months after a search). As a political writer who opposes the militant Right, it’s even scary to a guy like me.
****
[email protected], @JasonMiciak, SUBSTACK: ARTIFICIAL INTELLIGENCE IS THE GREATEST THREAT TO HUMANITY