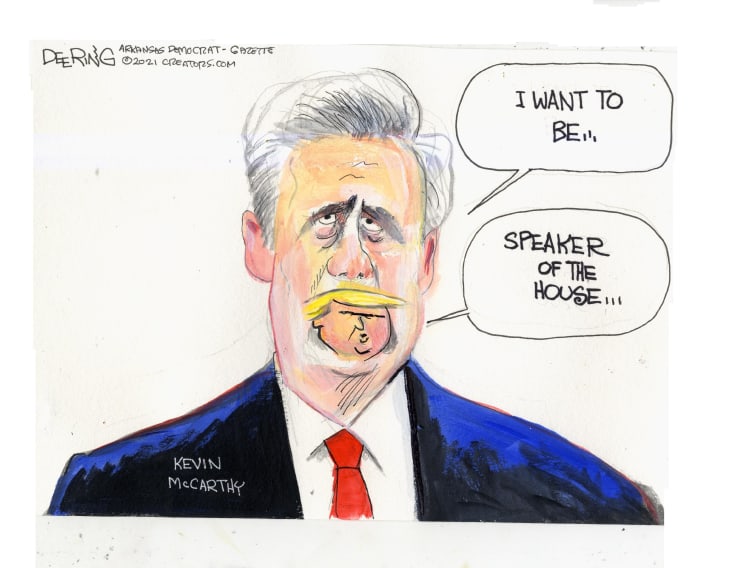 Except for the fact that there are a few obstacles to be overcome. The far-right QAnon caucus is holding Kevin hostage. If he wants their votes, he’s going to have to jump through their hoops, quid pro quo, take it or leave it.

And one of the big hoops is getting rid of people they don’t like. Simply put, McCarthy has been told to ax Adam Schiff, Eric Swalwell and Ilhan Omar from their committees. Or else. Here’s what Schiff has to say. (The clip is over eight minutes long. Salient portions of the transcript are below if you want to come back later and listen to the whole thing.)

BASH: As you well know, the man who is trying to be speaker, Republican Kevin McCarthy, says that he wants to kick you off the Intelligence Committee, the committee that you now chair, because of your handling of the Trump-Russia investigation, and specifically that you repeatedly asserted that there was direct evidence of collusion, direct collusion, which didn’t materialize.

SCHIFF: McCarthy apparently doesn’t think it’s collusion if your campaign manager is giving inside polling data and battle strategy in key states to an agent of Russian intelligence, while the Russians are helping your campaign, but most Americans would call that collusion.

Ah, the magic number, 218. Kevin’s personal lotto. And what’s intriguing is that if the MAGA QAnon caucus knows one thing, it’s that Kevin is a push over. He is one of the power for power’s sake guys. He got into politics for money, power and prestige. And he’ll do whatever it takes to move up the ladder. He apparently hasn’t read enough literature about lost souls and how the Devil tempts people like him to laugh off ethics and duty and trivia like that and then way too late, they come to understand why that stuff was important.

Kevin might just do it. And it will be no skin off of Adam Schiff. He’s prepared for it.

As a matter of fact, it might help Schiff in his quest for the Senate, which he may embark upon. Dianne Feinstein is retiring in 2024, but there has been talk for some time of her retiring before that and Gavin Newsom appointing her successor. That successor could well be Adam Schiff.

So fine, Kevin. Go right ahead and anoint the congressman and let him move on up the ladder to Senator Schiff. Has a nice ring, doesn’t it?

And don’t forget Nancy Pelosi’s parting shot, not too long ago. She said there was “nothing of substance there,” and that he was the “biggest empty suit I’ve ever worked with.” Oh, and then there was that time she called him a “moron” for his mask mandate criticism.

What’s comical is that Matt Gaetz has the same assessment of the situation as Nancy Pelosi. And he and Paul Gosar and Marge Greene will all do their part to stick it to McCarthy if he doesn’t play ball. I don’t know what Lauren Boebert is going to do. She’s pretty much in free fall right now, coming off of her very narrow victory, followed by immediate castigation for her anti-LGBT comments and yet another scathing editorial denouncing her in the Denver Post. She desperately needs a makeover and some good PR and who knows what that’s going to look like.

It won’t be dull in January. That’s the only thing that’s certain.