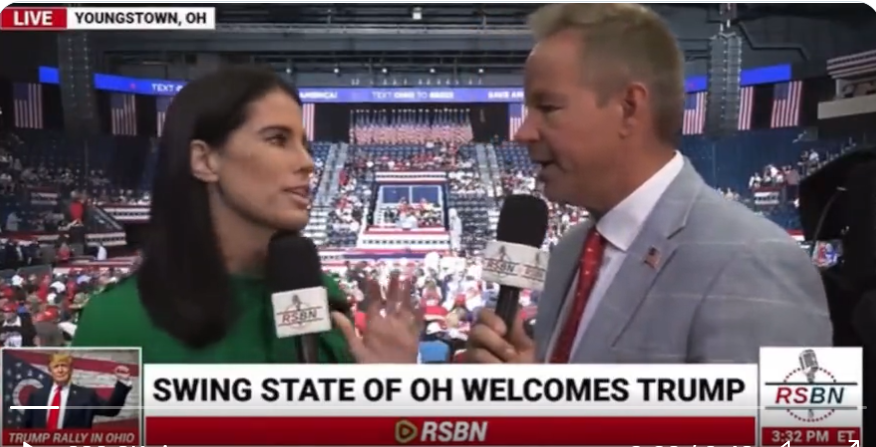 Think of the benefits of being a MAGA insider. One size fits all in terms of job descriptions, you just change hats. Christina Bobb, for example, will sign off on legal paperwork one day for Donald Trump and then the next she’s in front of the cameras, reporting on his latest show biz event.

Who at CNN has a law degree — besides the legal staff, I’m talking about the anchors? I would find it entertaining to have Jim Acosta or Anderson Cooper sign off on a piece of legal work involving Joe Biden and then go interview him that same evening when he does a national address. I think the ethical considerations for both professions of journalism and law are so intriguing that final exams ought to contain questions on this very thing.

OK, so the arena for the Trump rally, scheduled up against the Ohio St game, is pretty much empty and the first speakers are on in 20 min. Right wing hosts here think maybe everyone is stuck at the metal detectors. pic.twitter.com/FRk2FlPaYF

There will be hell to pay if it is metal detectors. Remember this gem?

The Great Pumpkin-colored One will ascend to the stage soon now, very soon. Or at least that’s the hope. It’s well known that Trump doesn’t like to go in front of a partial crowd. Somebody should have called Spielberg and said, “Hey, how do I get an army of extras out into the Ohio night?” because if history is any guide, the star of this epic is going to get upset with less than a full house.

Maybe MAGAs posing as FBI agents can chase all the cars out of neighboring fast food drive-thrus and other parking lots and direct them down the road, so Donald can have a proper crowd. Sheesh, I have to think of everything. I’ll send Save America my bill.