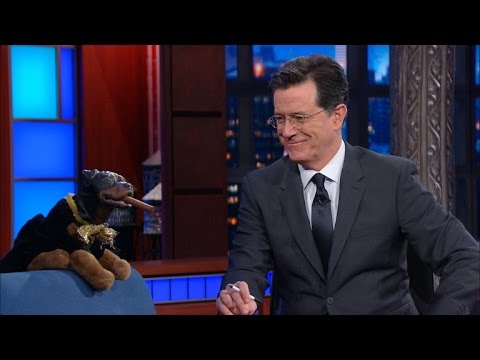 Last Thursday evening seven of Stephen Colbert’s staff and one Comedy Dog Puppet were detained by Capitol Police in the Longworth House Office Building of the U.S. Capitol and charged with “unlawful entry”.

Which was a bogus charge, because their entry into the building was completely legal, they had pre-arranged meetings with U.S. Reps of both political parties…

… to produce a comedy bit starring Triumph The Insult Comedy Dog (pictured with Stephen above) chewing the fat and presumably having some yucks with their host Adam Schiff and the other Congress critters.

It was their egress from the building that was problematic… they showed themselves out and stopped in a hallway to do set-ups for the bit… sans escort. That’s when the ever vigilant Capitol Police pounced and quickly squashed the Late Show threat to democracy.

That probably would have been that until the skit appeared on Stephen’s show, had not Tucker Carlson come out swinging on his own farce of a fake news program the next night accusing them of “insurrection” and “storming the Capitol”.

This is what Stephen had to say about all that:

“This was first-degree puppetry; this was high jinks with intent to goof; misappropriation of an old ‘Conan’ bit.’”

“The Capitol Police are much more cautious than they were, say, 18 months ago, and for a very good reason. If you don’t know what that reason is, I know what news network you watch.”

“Now, it’s predictable why these TV talkers are doing this — they want to talk about something other than the Jan. 6 hearings on the actual seditionist insurrection that led to the deaths of multiple people, and the injury of over 140 police officers. But drawing any equivalence between rioters storming our Capitol to prevent the counting of electoral ballots and a cigar-chomping toy dog is a shameful insult to the memory of everyone who died, and it obscenely trivializes the service and the courage the Capitol Police showed on that terrible day. But who knows? Maybe there was a vast conspiracy to overthrow the government of the United States with a rubber Rottweiler.”

I suppose the lesson to be learned from all of this is don’t leave the Longworth Building of the Capitol Complex without your hall monitor and pass.

And also no matter how hard you might try as a comedian, even employing a rubber dog puppet to interview Congressmen and Women – you can never hope to reach the heights of absurdity of Tucker Carlson and his (probably) Kremlin writers.

This is because comedy relies on a kernel of truth to induce laughs. A slice of veracity slathered over with a generous, delicious frosting of incisive invention is what really generates guffaws.

Tucker and his crew make no pretext of baking in some truthiness… that’s why what he does is not only not funny…but very dangerous.