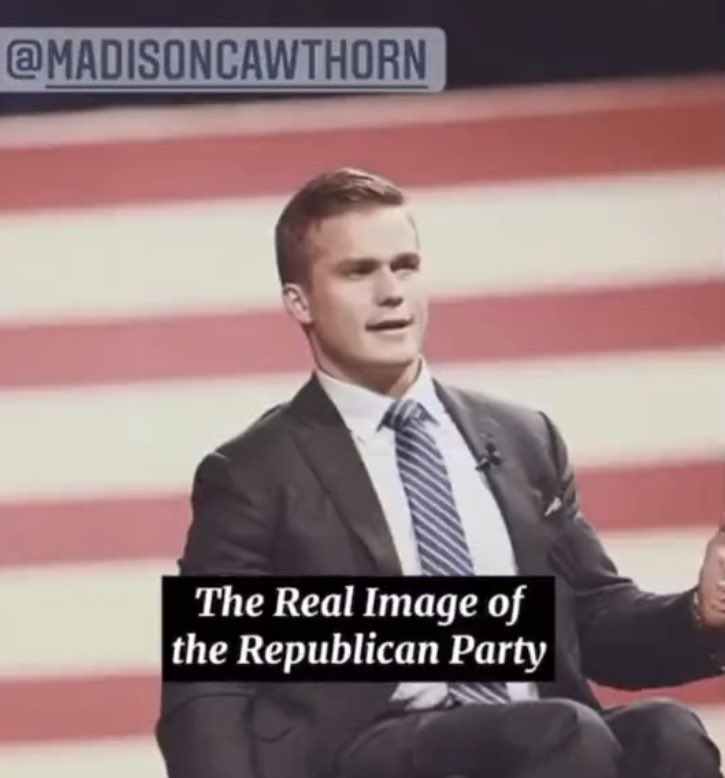 This is something that you’re going to see over and over again. Marjorie Taylor Greene, Madison Cawthorn, Lauren Boebert, the usual suspects, all claim to represent the one, true, GOP of 2022. And maybe they’re right. I think it’s safe to say that Mitch McConnell disagrees with this assessment. McConnell recently announced that he was planning to stay on as Majority Leader in the event that the GOP takes control of the Senate. And you know what he had to say about Marge’s “loony” theories. And that was even before the rumors started flying that Marge was the pipe bomber, an allegation which must have made McConnell cringe and reach for the Kentucky bourbon.

Here is yet another cringeworthy moment in GOP history. Say what you will about Cawthorn’s intentions in posting this, I am sure that Democratic political ad creators everywhere are singing his praises. This will look great in an ad mashup later on this year.

Early this morning, Madison Cawthorn shared a video with the text “The GOP is Dead” over images of fellow Republicans Liz Cheney, Lisa Murkowski, Mitt Romney, and Mitch McConnell. pic.twitter.com/Fh9wszU8nL

One thing I am sure we can all agree upon here, and that is that McConnell didn’t waste his time putting through a call to Kevin McCarthy, telling him to get his caucus in line. My view on that is that McConnell is waiting for McCarthy to be replaced as Minority Leader, even as we are and for similar reasons. It is a disgrace for a Republican congressman, a freshman no less, to be attacking the GOP establishment this way. McCarthy is thoroughly ineffectual in his job, or this would not be going on.

One thing is an absolute. McCarthy is not the House Minority Leader for this era. Maybe for another, but not for this one. McCarthy is to House leadership what Reince Priebus was to White House chiefs of staff, a massively wrong fit.

Back to Cawthorn and what a wrong fit he is as well, some North Carolina voters have taken it upon themselves to challenge whether he can even run for reelection after participating in the insurrection. The Hill:

A group of 11 North Carolina voters filed a legal challenge to disqualify Rep. Madison Cawthorn from running for a second term, arguing his involvement in a rally preceding the Jan. 6, 2021, riot on Capitol Hill constitutionally bars him from waging another campaign.

Lawyers for the 11 voters filed the suit to the State Board of Elections, contending that Cawthorn’s comments in the speech shortly preceding the insurrection violate the 14th Amendment, which states in part that no person “who, having previously taken an oath, as a member of Congress … to support the Constitution of the United States, shall have engaged in insurrection or rebellion against the same.”

The suit goes on to claim that the mob that stormed the Capitol last year in an unsuccessful attempt to halt the certification of the 2020 presidential race results “amounted to an insurrection.”

“As set forth in our complaint, the publicly available evidence, including Representative Cawthorn’s own statements and reports that he or his office coordinated with the January 6 organizers, establish reasonable suspicion that Representative Cawthorn aided the insurrection, thereby disqualifying him from federal office. We look forward to asking him about his involvement under oath,” said Ron Fein, legal director of Free Speech For People.

“Claiming to be fighting a battle for our Constitution, Cawthorn has engaged in blatant acts of insurrection,” added John Wallace, another lawyer who filed the suit.  “He must be held accountable for his actions which have threatened our democracy. Wisely, the Constitution provides a remedy for our protection. We seek here the imposition of that remedy.”

Cawthorn thinks he’s bulletproof because he’s running in the newly created 13th congressional district, purportedly a gerrymandered dream come true, analogous to the district that has kept returning Paul Gosar to the House.

The legal challenge that these North Carolinians propose is an interesting one. It would bar Donald Trump from reelection as well. And if our country were functioning properly right now, there would be no question at all but that this amendment, developed after the Civil War, would be in place.

‘Take Back America’ Nuttiness Spikes On Anniversary of Trump’s Departure From...