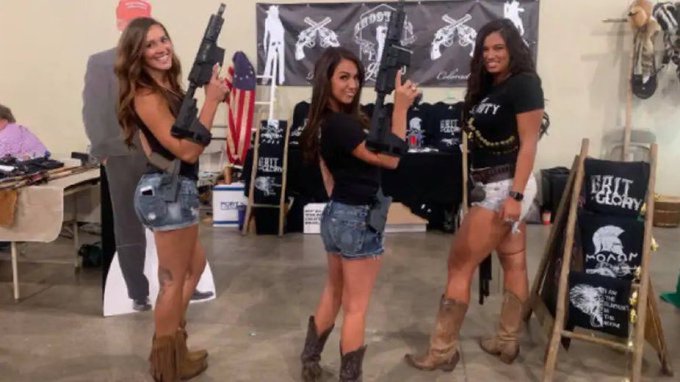 A titmouse was a bird, oddly named, we admit, until the era of Lauren Boebert. She is a titmouse. She is a mouse, intellectually (yes, I realize I’m insulting mice) and she spent a lot of money on implants, while not paying her workers. So she qualifies as a titmouse, at least in this new, secondary dictionary meaning which I just now invented: Titmouse: noun. “1) A small bird, 2) unless you’re talking about politics, then it refers to a shrill stupid woman with a chest the size of her IQ.” see, Lauren Boebert

Boebert is being primaried and the election is one month from now, June 28. How we can’t wait to see her go down in flames.

Lauren Boebert was laughed at and mocked by the entire audience at her debate on Thursday, after she accused her opponent of being an “illegal drug dealer” for supposedly selling “hot hemp.” pic.twitter.com/U8FoF9U9u8

Excuse me while I pick myself up off the floor. I’m on the floor because I have the image of Boebert’s horrific heckling of Joe Biden during the State of the Union address — and she’s demanding order? I may need to get heart medication if these sudden shocks continue. My head has already exploded, so forget about it.

Boebert is dumb as a rock and her opponent, Don Coram, is measured and calm. Colorado Newsline:

Though Coram’s campaign claimed that the candidates agreed on a “paper and pencil” policy — meaning they could have paper on stage to take realtime notes but could not bring prepared information — Boebert had pre-written notes she referenced frequently throughout the debate.

“She shows up with a notebook of answers already, and I’m up there with not even a piece of paper. I thought that was a bit disingenuous, but I also realize that’s her only operative, because she can’t think on her feet,” Coram told reporters afterwards.

The first question revolved around this week’s mass shooting in Uvalde, Texas, where a gunman murdered 19 elementary school children and two teachers. The candidates were asked what role Congress has in reducing mass shootings and what reforms, if any, they would support.

“Republicans and Democrats, for years, have talked about mental health. Mental health is the cause of a lot of the problems that we have in these shootings. But we have not put the commitment together to fund the necessary treatment and address those issues,” he said.

Boebert, who is a vocal supporter of gun rights and owns a firearm-themed restaurant, said that additional laws won’t fix the problem, as criminals will just disregard them.

Teachers as security guards, secret agents, cops. It’s a bit difficult to imagine. The best teachers I ever had in grades 1-12 had a love of learning, first and foremost, and they liked kids. They wanted to pass on to their classroom what had been given to them, a love of books, a lifelong desire to grow. That doesn’t seem to comport with para-military training. But then again, look at who is making the suggestion.

I do so hope that Boebert goes down in flames. it would be great if she lost the primary but it will be just fine if she survives that and goes on to lose in November.

We got rid of Cawthorn. Probably we’ll be stuck with Greene, but maybe not. Georgia is in flux these days, to put it mildly. But if we can just get two out of three bagged, Cawthorn and Boebert, that will be a major improvement.