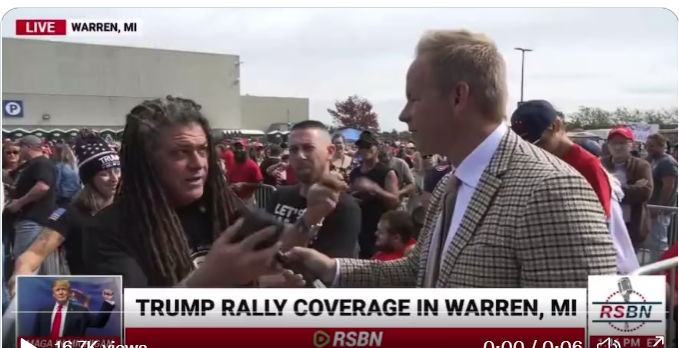 I fear that the midterm elections could be a hot mess with what’s going on in Warren, Michigan today. Trumpty Dumpty is holding yet another rally of his QAnon Kult.

As usual, the faithful arrived early, the Dead Head portion of MAGA that follows the rallies nationwide as the originators of the name “Dead Head” used to follow the Grateful Dead.

And you can expect the usual half dozen Blacks For Trump. But this Saturday there are a few more wrinkles in the fabric. The Election Integrity Force is out and they are recruiting.

People at Trump rally with the ‘Election Integrity Force’ are signing up people for their classes on how to become a certified “poll challenger” for the midterm elections. pic.twitter.com/8USouOMUuH

I’ll tell you why this could turn into a hot mess. The League Of Women Voters has poll watchers and poll challengers but these are regulated from state to state and the laws are not uniform. It sounds like these Michigan clowns are attempting to put into effect yet another way to disrupt the election process and who’s to stop them, when there’s such variance in the law governing such things nationwide?

And of course the rally has other bozos. It would not be complete without Mike Lindell, right?

Out at the Trump rally, Lindell says he believes the FBI illegally put a tracking device on him to nab him at the Hardees, but he can’t prove it yet. pic.twitter.com/kaktbZ3oak

And he weighs in on the “worst Republicans in history” and not the ones that the yous and mes would ascribe that title to. Not by a long shot.

Lindell says the Georgia Republican Party has nominated “the worst three Republicans in history” for Governor, AG, and Sect of State. pic.twitter.com/oRaLkQ9uuU

Here’s another particle physicist in the crowd.

Guy at Trump rally says Anderson Cooper should support the Italian PM because she is a woman and gay men are supposed to support women’s rights. pic.twitter.com/N5LmCGX1k8

It’s hard to top something that stupid but this guy succeeded.

Guy at Trump rally says Trump and Jared Kushner were “amazing! This guy has like a magic wand. He can fix it all!” pic.twitter.com/9u08Iarj9b

Magic wand. Righto. Maybe it’s the same magic want that Trump uses to declassify documents just by thinking about it, ya spose?

The day is young. We’ll be monitoring the madness, per usual.