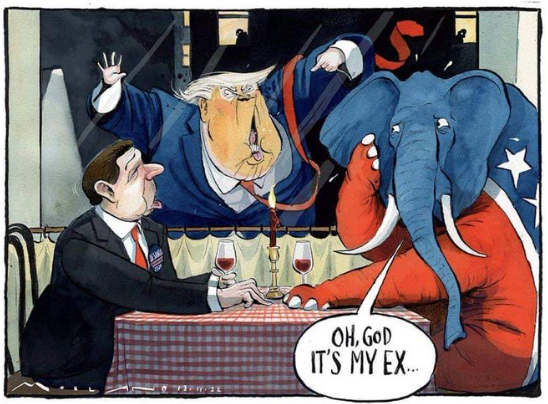 You remember the old expression, the husband is always the last to know? It’s meant to describe a scenario where the facts of a given situation are known to everybody except the person who has the most to lose. This describes Trump’s “marriage” to the GOP to a tee.

They’re done with him. They have given him up. Just this week alone we have heard Donald Trump’s former vice president say how disappointed he was, followed by Mike Pompeo, his secretary of state, say he doesn’t want Trump to run again.  We’ve also heard recently from Mick Mulvaney, former chief of staff, say that Trump couldn’t cut the mustard and Mark Esper echoed sentiments he has stated before about Trump’s unfitness for office.

And now we have his attorney general, none other than Bill Barr, his “killer,” his Roy Cohn surrogate, say two things, one that Trump never rose to the occasion and became presidential and that he’s probably going to get indicted.

Barr is as good at reading the legal tea leaves as anybody out there. What is intriguing is that he feels no compunctions about saying so in public. If he was saying this in a back room, smoke filled or not, that would make perfect sense. But saying it in a public interview? Wow.

And it gets worse. This is Barr fundamentally trashing Trump’s character.

Bill Barr on Trump: “He failed. He didn’t do what the country hoped – that he would rise to the occasion and rise to the office, and he didn’t do that. He’s had his chance. He obviously doesn’t have the qualities necessary. He should stand aside.” pic.twitter.com/u15SlwwAuF

Well, there you have it in quadrophonic stereo, ladies and gentlemen, Trump should stand aside — and this is three days after he announced he was running for president in 2024. Having problems reading the room, much?

So, just to review the score card at this point, we have Trump, who declares himself the frontrunner and winner of all polls, and who declared his candidacy three days ago. We have on the other team, the GOP, which is supposed to be Team Trump, but which no longer is. It’s now Team GOP and they want Trump gone.

Then we have the DOJ, and the newly appointed Special Counsel. Barr is saying here, in so many words, that he agrees with what Merrick Garland has done and he believes that an indictment is probably in Candidate Trump’s future. That would tend to rain on anybody’s parade, but Trump is so used to surviving against impossible odds, he believes he’ll pull through this, too.

What Trump doesn’t get, is that the only reason that he was able to weather the deadly storms he created is because the Republican party was willing to protect him. That was then, this is a new day. The GOP has no reason to stand by him now. He keeps losing elections. If he can’t deliver wins to them, he’s useless. They are now at the place after the failure of a red wave to materialize at the midterms, where they have decided he’s useless. Whereas Trump is at the place of thinking that he’s still the golden boy and he will return triumphally through the streets of Washington.

A further test of Trump’s anti-Midas touch is forthcoming in a few weeks in the Georgia runoff. Right now, Raphael Warnock is running campaign ads linking Trump to Walker, believing that to be detrimental to Walker. When Walker loses, that will be just one more piece of evidence that everything Trump touches dies. Walker very probably will lose because he was running 35,000 votes behind Warnock at the end and he’s out there alone. He doesn’t have Brian Kemp on the ticket with him and the Democrats are fired up.

Walker is a horrible candidate. He only got as far as he got because there were strong Republicans on the ticket with him — paradoxically, enemies of Trump; Brian Kemp and Brad Raffensperger, to name two.

This is going to be something. It won’t be that long from now when Trump finally realizes that he does not have the support of the GOP and it’s not going to be like 2015-16, where he manages to survive somehow and then triumph at the ballot box. It’s a different world now and everybody knows it but him. Incredible, but true.