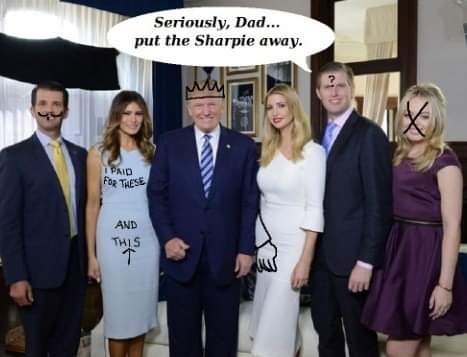 You all know by this time that I was born, raised, and spent 38 years living in Chicago. You know, the home of The Capone Family, and on an almost annual basis being voted as one of the top 5 most politically corrupt states in the country.The reputation was well deserved. The Democrats feasted in Chicago and Cook County, while the GOP made hay in the southern part of the state.

But even with that pedigree, I must admit that even I’ve never seen a 220 page lawsuit with some 200 specific examples of illegal and criminal activities. Hell, even John Gotti in New York didn’t have 200 specific criminal acts charged to him when he went to trial.

But that’s exactly what New York Attorney General Letitia James just did earlier this week in her press conference. She laid out a summary of her case in exquisite detail against Trump, his worthless children, and assorted other miscreants. And while she didn’t seek the civil death penalty of dissolving the Trump Organization, she asked for $250 million in fines and recompense, and severs sanctions on Trump, his children, and the organization in the future.

Bravo to NY AG James, because this is a textbook slam dunk case. Why? Because James doesn’t need any Trump Org quislings to roll over on Traitor Tot. Because she has something even better. She has a documents case. The only witnesses that James needs to call are forensic real estate and accounting savants to show exactly where and how Trump manipulated the true value of his properties to screw federal, state, and local tax officials, as well as insurance companies and investors.

Yeah, I know, there’s a problem with that. Mainly that when you present dry, fact and data filled cases, the jury tends to end up with the legal acronym of MEGO, My Eyes Glaze Over. But please remember that the DOJ’s case against Trump crony Paul Manafort was a documents case, and the jury dropped the hammer on Manafort. If the prosecutor is creative, and uses colorful exhibits, they can keep the jury’s attention.

But, and here I apologize for irritating one of my valued readers, is the McGuffin. Take my word for it, this lawsuit will never see the inside of a New York courtroom. For one simple reason. Anytime you go to trial, you’re engaging in a crapshoot. And in a high stakes case like this, neither side can afford to leave the outcome to 12 everyday slobs like you and me.

On the New York side, James has a slam dunk documents case. But in addition to having to walk between raindrops to educate the jury to the mechanics of the fraud case she’s presenting, and the Trump family’s culpability, she has to worry about the likely Trump defense of, Hey! This is New York real estate, everybody does it! I’ll deal with that defense in the next paragraph.

On the Trump side, they cannot afford to go to trial. Because every card is stacked against them. NY AG Tish James has the receipts, and she’s going to show them. And even if the defense goes with the Hey! This is New York real estate, and everybody does it! defense, James can shut that down. She can call witnesses to show that while everybody might inflate their property value by $50,000-100,000, nobody has ever been as insanely greedy as Trump. Nobody has ever claimed that a 5th Avenue apartment of 11,000 square feet was actually 33,000 square feet, and worth $325 million dollars. Trump’s greed is going to be his undoing.

But neither side wants to roll the dice in that kind of a crapshoot. Which means an out of court settlement. And in those negotiations, AG James is in the drivers seat. And because James holds all 52 cards in the deck, the terms are not going to be beneficial for Trump and his idiot adult children.

Likely James won’t get the $250 million in penalties and recompense she’s asking for. But she’ll likely get between $175-190 million, enough to cause an incredible cash crunch of the Trump organization. But James has bigger fish to fry, and she will.

In her lawsuit, James seeks to bar Trump and his children from serving on the board of any company chartered in New York for at least 5 years. I’m not sure what that means when the Trump Organization is a private company, with no board, but I’m sure that sanctions will be negotiated that will curtail the control of the company from the Trump Mob.

More importantly, in her suit James is seeking to bar any banks registered in the state of New York from dealing with the Trump Organization for a minimum of 5 years. That pretty much eliminates anybody other than Billy Bob’s Bait Shop and Savings and Loan from even talking to him. And since Trump has several loans coming due in the next 18 months worth hundreds of millions of dollars, it could cause a salmon run on the price of his properties.

Look, James won’t get everything, but she’ll get most of what she wants, and I think I know what she wants. And what I think she wants is to permanently kneecap the RICO criminal organization of Trump and his kids. Which means that in any settlement, there will be independent, court appointed forensic accountants and real estate experts to have the final say on any deals.

Which means that for the first time in his life, Trump will no longer have dictatorial control over his company and its shenanigans. For the first time in his sad, misbegotten life, Trump is going to have to play by the rules. And where’s the fun in that? Or the profit? For a career grifter like His Lowness, a settlement like that would be worse than a death sentence. But the alternative is pauperdom. God, I can live with that.