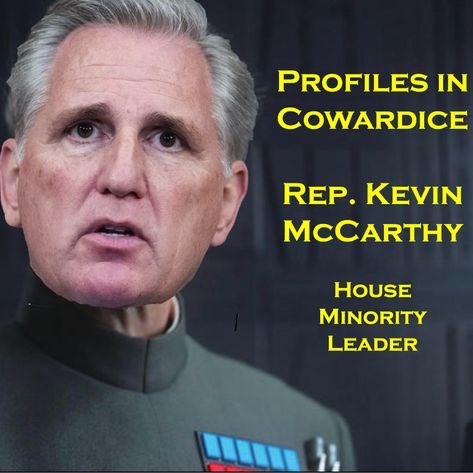 No man can serve two Masters

Truer words have never been spoken. And the way things are going right now, Kreepy Kevin McCarthy may end up wanting them as the epitaph on his tombstone. Because McCarthy isn’t just trying to please two Masters, he’s simultaneously trying to grovel before three! And that isn’t a recipe for success.

A quick recap. At this point it appears that McCarthy will go into this knife fight with a caucus majority of 222-213. To do anything in the House, even get elected Speaker, it takes a simple majority vote of 218. And in the closed caucus vote a week or so ago, McCarthy got 188 votes, with not every member voting. So at the moments, he’s $30 short for the ante to play.

McCarthy doesn’t have an easy road to hoe. He’s trying to unite two disparate factions, the Trombie caucus, and the Teabagger caucus, who don’t just hate each other, they both hate and distrust him. In his quest for 218, this means that McCarthy is going to have to make deals like a bastard maniac in order to bring them on board. And that’s a rough road, because the caucuses aren’t even united in common goals. For instance, Sugar Daddy Matt Gaetz despises Laborious MTG, because she’s more popular than him, and has more of Trump’s ear. So, any deal that McCarthy cuts with MTG, Gaetz is almost certainly going to want more. And even that’s a hollow victory because the Trumpista’s and the Teahadists don’t equal 218 votes.

Yep, here comes that pesky moderate conservative caucus of 20-25 members again. McCarthy’s problem is that they aren’t really a caucus, they’re all individually elected from mostly suburban swing districts on moderate principles, but they’re not united. Which means that McCarthy can’t just deal with 1-2 of them who speak for the rest, he has to fluff each individual member. And they don’t all want the same thing. Up until now, they’ve basically been silent, keeping their powder dry.

But not anymore, at least not all of them. As more speculation and reporting comes about some of the Let’s Make A Deal shenanigans McCarthy is pulling in his craven request for power, at least some of the moderates are finally starting to grumble. And it’s not sweet nothings that they’re whispering into Kevin McCarthy’s ear.

For starters. One of the deals that McCarthy has cut with the Trombie caucus is to put their members in control of the major committees, and then give them carte blanche over an endless stream of baseless, useless, unfounded investigations into every thing from Alejandro Mayorkas to Tony Blinken, to Hunter Biden’s laptop. But several of the moderate caucus are making it clear that when McCarthy comes to them, there’s gonna be one hella hissy fit. Their constituents sent them to DC to get shit done, and they know the same disgruntled constituents can vote them out in 2024. They are going to make it clear to McCarthy that if he wants their votes, the major public facing appearance of the GOP House majority is going to be trying to get shit done, not useless show investigations for a stupid 30% base. This is going to place McCarthy into direct conflict with the Trombie crowd.

But wait! There’s more! In his craven quest for power, another power sharing agreement he had to make to Laborious MTG is that, if he is elected Speaker, his first move will be to strip Eric Swalwell, Adam Schiff, and Ilhan Omar of their committee assignments. This is a pure act of vengeance from MTG, payback for Speaker Pelosi stripping her of her committee assignments. This brazen act of craven cowardice is not going over well with the moderate caucus, who don’t want the GOP looking like petty politics to their constituents.

On this one, the McGuffin is that the GOP moderate caucus doesn’t have to say or do a damn thing right now. Because there’s already a House process in place. When Speaker Pelosi moved to strip Gosar and MTG of their committee assignments, she had to first bring a House resolution to the floor, and pass it through the Democratic majority to cut them loose. And if he becomes Speaker, McCarthy is going to have to do the same damn thing. And if he calls the censure vote to the floor, and 4 or more moderate conservatives vote NO, then McCarthy looks like a feckless schmuck to the other 2 wings of the caucus. Which could be fatal for McCarthy.

There is about 5 weeks until January 3rd, and D-Day for McCarthy’s chances of becoming Speaker. And this is going to be fascinating to watch, simply because McCarthy is almost as big of a political imbecile as Trump. McCarthy is trying to sew up the 2 largest factions first, then deal with the smallest one last. But the smallest one isn’t a faction, they’re individuals, and McCarthy is going to have to deal with each one individually. And it only takes 4 to sink his battleship. The smart move would have been to deal with the moderates first, cut his deals there, and then try to cobble acceptable deals with caucuses who had a basic power structure.

Which in fact makes the 20-25 man moderate caucus the ultimate power brokers in all of this. They can let McCarthy flop around like a carp on the bottom of the boat, quietly meet and select a GOP moderate current or former member of the House to nominate, and take that name to the Democrats. And if the Democrats play ball, then the caucus puts that name to the floor for a vote, and McCarthy has no choice. And if that candidate passes, then McCarthy is boned. Sideways. And so are the Trumplets and the Teabaggers.

No more endless fruitless show investigations. No more stripping legitimate Democratic members of their committee assignments. And thanks to the moderates in the GOP, a GOP led House that is more interested in actually governing than they are in Traitor Tot and his twisted discipline.

That is the true wonder and power of Biden and the Democrats miracle upset in the 2022 midterms so special. If the GOP had won the widely, if erroneously expected 25-30 seats, this all would be a moot point. But the Democrats ran a brilliant campaign, and kept it so close that the incoming house GOP leadership can’t even decide on a Speaker, much less move on to govern. Oh what a tangled web we weave, when first we practice to deceive. Don’t touch that dial.