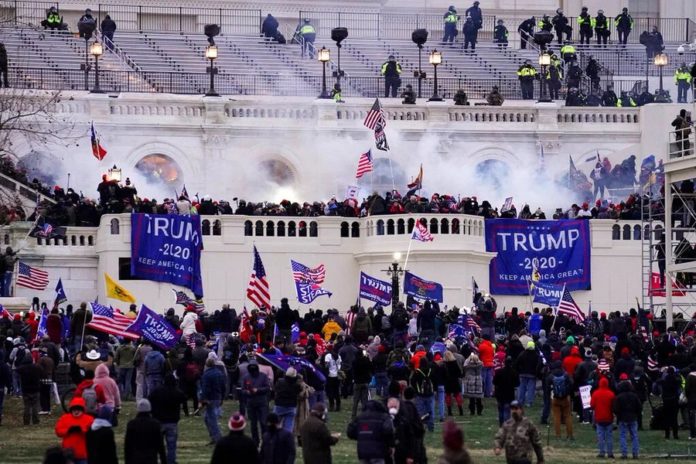 I can already tell, this isn’t going to end well for the GOP. When you look at what’s going on with all of the little Trumpkins, both seditionists as well as GOP House members, they’re acting like a bunch of 3 year old’s who had their favorite toy taken away, and sent to the corner for a time out.

On the one hand, you have a seditionist who took selfies of himself with his feet on Speaker Pelosi’s desk, and bragging outside afterwards about all of the shit he stole from her office, and he’s screaming over the phone to a federal judge about how unfair it is that he’s still locked up, while everybody else has already gone home. And then you have another Trumplet who is bitching to a federal judge at a preliminary hearing about roaches in his holding cell. What does he think his 20 year accommodations are going to look like?

Here’s the problem my friends. The GOP, especially the brain dead Trump acolytes in the House are about to walk into a buzz saw, and they don’t see it coming. This is due to what I like to call The Triple Crown, complacency, stupidity, and arrogance. While they are all still busy reliving the glories of days past, and relitigating their failure, they are completely missing the fact that the current day is a completely different game.

Look at it from the view of the Trumplets, especially the ones in the GOP House. For the last four years, they have been like a rampant gang of juvenile delinquents, set loose in every candy store in the city while the cops are all tied up with a major bank robbery. They were led by a criminally corrupt President, overseeing a criminally corrupt cabinet, and for good measure, an Attorney General that was nothing less than a get-out-of-jail-free-card.

But because they are so selfish and self indulgent, they don’t quite seem to have come to grips with the fact that those glory days are over. In the coming days, whether the GOP likes it or not, Merrick Garland will be sworn in as the new Attorney General. And he has already promised to vigorously pursue all leads into all criminal activities in the Capitol takeover. When you subtract the brain dead Trump seditionists, pretty much the entire country is uber pissed and outraged about the atrocity at the Capitol.

But they have the data. Now it’s up to the FBI to create a case strong enough for a judge to sign a search warrant for them to actually obtain the physical records for those phones at that time. That would allow them access to actual call records between phones at the indicated times, as well as text messages sent and received.

Multiple Democratic members of congress screamed bloody murder at the time about what appeared to be unauthorized tour groups being led by the nose through the Capitol on the day before the insurrection, either by sitting members of congress or their staffs. According to reporting, all I of that data and information has been turned over to the DC US Attorney for criminal referral.

This isn’t going anywhere. Garland has made it clear that his DOJ will pursue all criminal prosecutions stemming from the Capitol assault. And a Garland DOJ will provide the FBI, along with all other due investigative arms, all the support they need to make these cases. Garland also acknowledges the threat of white supremacist groups, not only in the insurrection, but as a current threat to domestic stability. I am not naming any names, but I can think of several sitting GOP House members who might be having some sleep deprived nights, wondering just how far their own personal asses are hanging over the fire here. Don’t touch that dial.