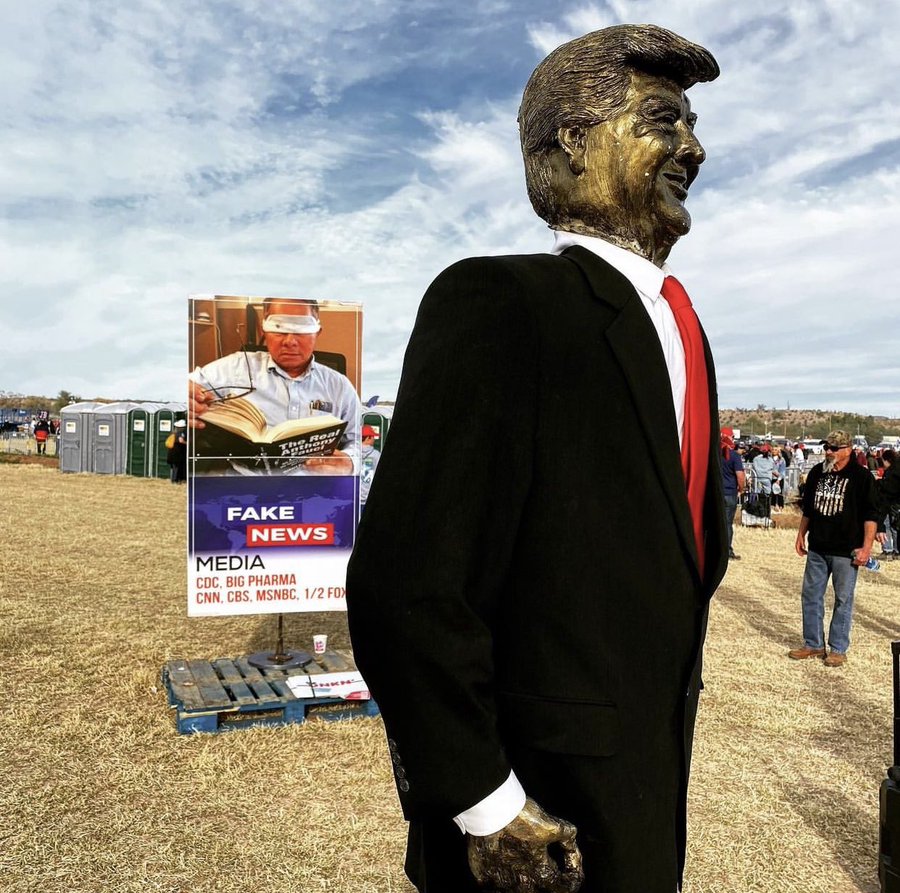 We begin tonight’s MAGA Nation coverage just like they do the Oscars, with interviews from the red carpet. You will hear from people who have been sleeping on the ground for three days, in order to ensure themselves a front row seat to hear the Orange Oracle declaim on his version of reality and what they should do about it. Spoiler to MAGAs: You might want to check on the number of insurrectionists indicted and/or sentenced before you go blindly obeying Gonorrhea Goldfinger, just a thought.

Here’s a couple with dark visions of the future.

Guy at rally is asked about Trump getting reinstated: “I do my research every day and I trust that something is happening behind the scenes. We’re looking to move off grid and learn how to raise our own food and be prepared for what’s coming if the thing doesn’t get overturned.” pic.twitter.com/IPFPVgbLMq

“Be prepared for what’s coming if the thing doesn’t get overturned.” Civil War II. Okay.

Let us quote Thomas Paine, “To argue with a person who has renounced the use of reason is like administering medicine to the dead.” I will drop this link here once again, although the people here are not the ones who need to see it. The people at the Trump rally need to see this, but if they did, they would just proclaim that Bill Gates, Chair of the Maricopa County Board of Supervisors, is a member of the Deep State.

This is dangerous. This is devolution, social decay, happening very quickly and in real time. And Trump himself is the one using the label “MAGA Nation.” That’s who he intends to speak to tonight. He never said he was a president for everybody, and that’s also the first time in American history that has happened. Every other president has acknowledged that he (so far it’s only been a he) appreciates the fact that many people did not vote for him and he wants to now bring the country together and be the American president. Trump never talked like that.

Here is a clip showing the die hard Trump fans. I knew somebody who slept on the sidewalk for two nights to get tickets to the Beatles performing at Red Rocks and that made sense to me. This does not.

Guy from FL at the Trump rally in AZ says this is his 40th rally, and he has been sleeping out here for 3 days with some other people to make sure they get in the front row. pic.twitter.com/8jxIZWb4dB

And of course we must wax religious at this point. It is not an official MAGA event until somebody recites the dogma.

You know my opinion about which universe personality the Dreamsickle Deity worships.

And speaking of graven images, take a look at this MAGA. He fits right into Costco Marseille. Trump will probably offer him a cabinet position.

Guy wearing a Trump jersey at the rally today shows off his very unique gold jewelry collection. Interviewer says, “I have no words.” pic.twitter.com/yCx5fl6a6U

I don’t even want to know if he’s gold plated his toilet, like you know who. Some things are best left undiscovered.

The goal of tonight’s show is to elevate election denial and election deniers, as Axios reported four days ago. Take a look and feel your stomach sink.

Former President Donald Trump announced guest speakers today for his Saturday rally in Arizona, and most of them share a common trait: they led efforts to overturn the 2020 presidential election.

Why this matters: Trump, who remains the most powerful figure in the Republican Party, is making his false claims about the 2020 election the centerpiece of the GOP platform.

Between the lines: Trump has made clear to all who seek his endorsement that if they want his blessing, they need to make overturning the 2020 election as much of a priority as subverting future elections.

The details: The guest list for Trump’s Arizona rally is a who’s who of election deniers.

The big picture: Trump is also working to install Republicans in election administration positions who could be well-positioned to overturn future elections.

Pause for just a minute and take stock of this. I think Axios is right. But if that is the case and it looks like it is, then literally politics in this nation has devolved into a battle between truth and lies. Policies don’t matter, they’re not on the GOP platform. This is, the fantasy of the stolen election. And woe betide any Republican who says otherwise.

The bottom line: Trump’s goal, his advisers say, is to either make life so miserable for them that they quit or end their careers by backing a successful primary challenge.

This is not America. This is nothing short of a declaration of war upon democracy and if we see it as anything less than that, we are fooling ourselves. Now is not the time to be an ostrich.