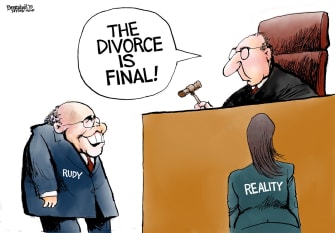 Rudy, Rudy, fresh and froody, how does your garden grow? When we say “garden” we mean Garden Of Disasters, of which there is no short supply. Just in recent memory Rudy was found in a Borat film with his hand down his pants,  his law license then got suspended in New York and D.C. because he can’t shut up about the Big Lie. (Lawyers are not allowed to make “demonstrably false and misleading statements.”) Then the January 6 Committee accused him of being drunk on election night, which he denied. He’s a man who takes the Pepsi challenge, never a drink, he said.

Things quieted down for a little bit until he tried to have a man thrown in prison for tapping him on the back. Rudy claimed he could have been knocked over and egregiously wounded. The store camera made him look like an idiot, but not quite as much as  shaving in the middle of an airport restaurant.

There was a bright ray of sunshine for a moment, when it was revealed that charges probably wouldn’t be brought against him for lobbying the Trump administration during the Ukrainian election, so he could get dirt on Joe Biden from Ukraine. Be that as it may, Rudy’s ex is coming after him, and she’s got all guns blazing. Vanity Fair:

Page Six reports that Judith Giuliani, the third wife of the former mayor, has sued her ex-husband, claiming in a sworn affidavit that he owes her $140,000 for their Palm Beach property, $70,000 for country club fees, and $45,000 for household help. In the case of the latter, Judith said in the court filing Rudy “has made inconsistent and sporadic payments to me, including a $10,000 check in June 2021 that was returned due to insufficient funds.” She has demanded he pay her “immediately,” with interest, according to the Page Six, and insists that despite what must be a recent hit to his financial situation, he’s got the money. “He owns multiple properties in New York City and Palm Beach [and it seems] he has significant earnings from his media-related contracts and deals,” she said.

Should Rudy choose not to fork over the cash, his ex’s lawyers, who argue he is in contempt of court for failing to make the payments, say he should be thrown in jail. “Your failure to appear in court may result in immediate arrest or imprisonment for contempt of court,” the filing reads, according to the Page Six.

Judith filed for divorce in April 2018, following 15 years of marriage, and proceeded to engage in an extremely combative battle as they divided their assets. A previous lawyer of Judith’s accused Rudy of working for Trump pro bono to lower his income, and thus the amount of alimony he had to pay his ex. Judith also alleged that Rudy stole her Christmas decorations, while he claimed took “his TV remote controls and cable box so he couldn’t watch himself on TV,” per Page Six. (The former mayor has denied both working for Trump for free to reduce his alimony payments and stealing the decorations.) For those trying to keep the former mayor’s love life straight, his first marriage was to his cousin, which was followed by an 18-year marriage to Donna Hanover, the mother of his two children, who found out he was leaving her during a press conference.

Rudy must have been trying to imitate Arthur Miller, the playwright who announced his engagement to Marilyn Monroe during a press conference. But I think Marilyn knew about it, Rudy’s wife did not. Rudy has always wanted to do things the way New York highbrows did them, don’t you know?

Rudy still has to go down to Georgia, with or without The Devil, because he’s been subpoenaed to talk about Donald Trump’s efforts to overthrow the election.

Things are busy, but not so busy that Rudy can’t cobble together a new conspiracy theory, this time against Fox News.

Rudy Giuliani says he “spent an hour checking the numbers” and believes Trump “was cheated by the networks” because they didn’t call states Biden ended up winning for Trump.

Rudy says even Fox News was in on the “fix.” pic.twitter.com/mojDpPlSWE

Pure gibberish doesn’t even come close. From the cover of TIME to this. Rudy is one of those people whose legacy would have been intact if only he had died when he was at the top of his game and didn’t sink to this.

Here’s Rudy’s case against Fox. They treat him like “I never existed.” That’s how dumped people are treated, yes.

Will Rudy and Fox reconcile? Will Judith ever get her settlement from Rudy, or will she have to have Vinnie and Rocco break his legs? Will Donald and Rudy end up batching together after Melania leaves and MAGA trades in Trump for Ron DeSatan? Stay tuned.