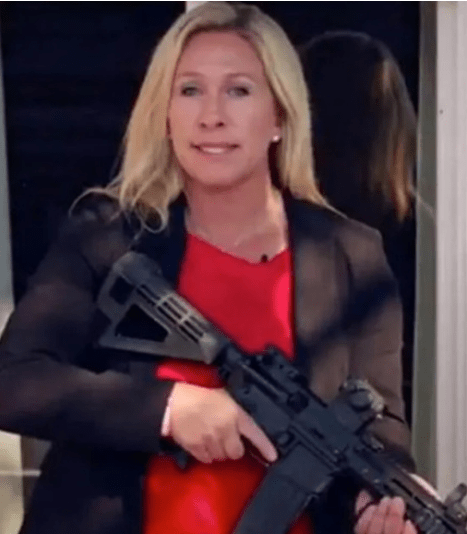 Where oh where is minority leader Kevin McCarthy? He is supposed to, and we quote “have a conversation” with Marjorie Taylor Greene. When might that take place? Or, perhaps where is a better question? In an alternate dimension? Because it would certainly appear that McCarthy is not too worried about the damage that the woman wreaks in this one.

If you’re wondering exactly which comments of Greene’s McDaniel is referring to when she says “disgusting,” we understand your confusion. We may need to publish a book, “QAnon Congresswomen For Dummies” and list there all the categories of insult that Greene and the other QAnon queen she is frequently confused with, Lauren Boebert, have uttered to date.

For now, McDaniel is referring to her anti-Semitic comments about the “Rothschild bankers” and Dianne Feinstein’s husband, Richard Blum.  Slate:

Feinstein and her husband are Jewish, and conspiracy theories involving the Rothschilds are a long-standing anti-Semitic trope. Rabbi Abraham Cooper, the associate dean and director of global social action of the Wiesenthal Center, told me “anyone who used the term ‘Rothschild banker,’ that’s shorthand for Jews.” Cooper called on Greene to apologize and said she should not be on the House Committee on Education and Labor.

When told of a video Greene once posted on social media in which a narrator says “an unholy alliance of leftists, capitalists, and Zionist supremacists has schemed to promote immigration and miscegenation, with the deliberate aim of breeding us out of existence in our own homelands,” Cooper said: “This is clearly a person that has an anti-Semitism problem.”

Democrats have been calling for weeks to expel Greene from the House of Representatives, based on her anti-Semitism, conspiracy-mongering, and insurrection-backing. Given her popularity with former President Donald Trump and with the QAnon movement, and its overall interest in owning the libs, the institutional Republican Party has been much more reluctant to respond. But after the latest revelations, Republican National Committee Chairwoman Ronna McDaniel called the comments “disgusting” and said there is “no place for anti-Semitism in our party” and that the comments “should be looked into.” And a spokesperson for California Rep. Kevin McCarthy, the House minority leader, told Slate, “These comments are deeply disturbing and Leader McCarthy plans to have a conversation with the Congresswoman about them.”

Before that conversation could occur, Greene put out a statement denouncing “the radical, left-wing Democrat mob and the Fake News media trying to take me out” and saying “I will never back down.”

And when McCarthy has a conversation with Greene, maybe he’ll mention this video advocating violence. Ya spose?

SCOOP: In a pre-election video just uncovered by Mother Jones, Republican Marjorie Taylor Greene is seen endorsing political violence. “The only way you get your freedoms back is it’s earned with the price of blood," she says. More here: https://t.co/GcXZQY0K30 pic.twitter.com/lSA6JUeWjM

It won’t surprise you to learn that reporters who are asking different Republican leaders what their opinion is on this are either getting stonewalled, or the leaders say that they do not support Greene’s views.

Rep. Jason Smith, the secretary of the House Republican Conference, did not respond when his office was asked if he believed that “Rothschild Inc” had fired space lasers to start the 2018 Camp Fire, or if such comments were appropriate.

Rep. Gary Palmer, the chair of the House Republican Policy Committee, did not respond when his office was asked if he believed that “Rothschild Inc” had fired space lasers to start the 2018 Camp Fire, or if such comments were appropriate. […]

A spokesperson for Rep. Steve Scalise, the House minority whip, said, “No, of course he does not believe that.”

He doesn’t support “hate-driven” CT, but he supports love-driven ones? Like the earth is flat, something like that? Just wondering. It would never have occurred to me before the year 2020 to wonder exactly what sort of conspiracy theories a GOP lawmaker subscribed to. Now I realize, that’s the Rosetta stone. When you know that, you know who the person is.