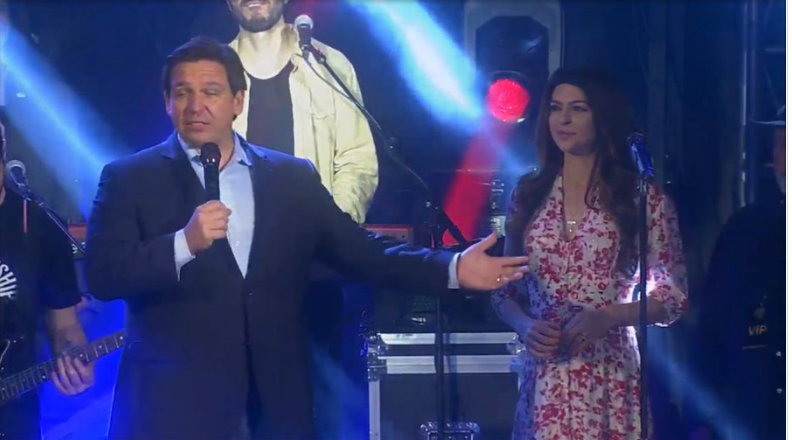 After being missing in action for a couple of weeks, Ron DeSantis finally ventured out of his hidey hole and showed up in public. If we are to be judged by the company we keep, then his New Year’s Eve choice of venue says a lot and what it says is not good, It’s frightening in fact,

Does the name Sean Feucht mean anything to you? He’s a dominionist Christian. Their idea is to take over government. Theocrat is another word and Mike Pence is a theocrat. These people are scary as hell. Feucht put together a group of “volunteers” when the George Floyd demonstrations were going on and the hate watch groups’ dashboards all began lighting up. 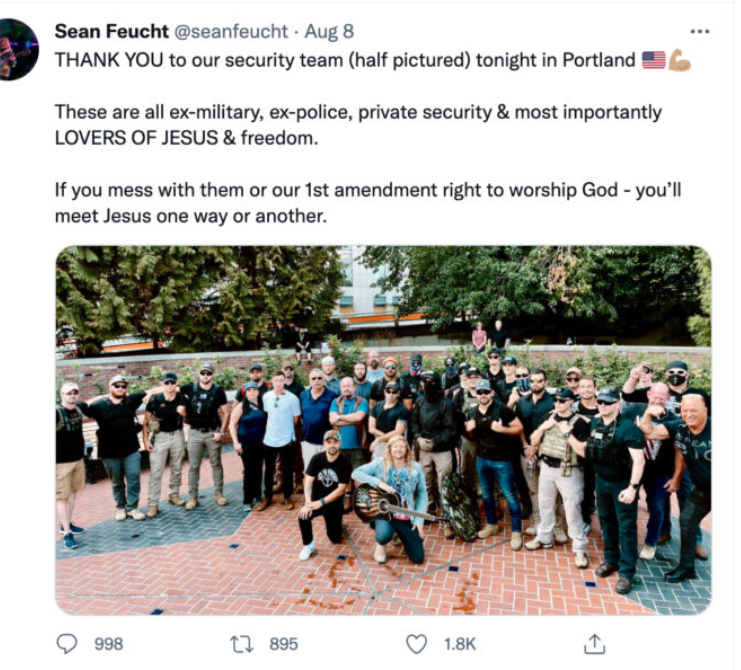 Sean Feucht held a New Year’s Eve worship service in Miami. Lo and behold, who should show up? Ron DeSantis.

Ron DeSantis came out of hiding to speak to a packed concert as covid cases surge in Florida.

The “Let Us Worship” concert was put on by Awake America, a group that sees covid mitigation as a oppositional to the Christian faith. pic.twitter.com/9f9pkqDnx7

And you need to see this video as well. Feucht is also tight with Josh Hawley, another faux Xian religious fanatic.

Pat Robertson dreamt all this up back in the 80’s, how religious people were going to run for office and take over the government.

If you never read my piece, “Mike Pence Is A Theocrat. His Christian Supremacist Followers Seek to Take Over America,” I invite you to do so now, You will see how the basic game plan is structured and has been structured for 40 years.

It’s clear as glass, at least to me because I’ve been following this for quite a while, Erik Prince has cut Mike Pence loose because Pence is finished in politics and Pence’s successor is Ron DeSantis.

Do not underestimate these people. I’ve been told in the past that I need to chill, that I’m too worried about this. No. These people are real and they will install a dominionist government in this country if they can and right now Ron DeSantis is their boy.

And here’s something you need to look at, too. Legitimate religious people don’t like Feucht. They see him for who he is. Religion News:

Feucht returned to Portland Sunday [August 21] on the anniversary of his 2020 visit on his national “Let Us Worship” tour that protested COVID-19 restrictions. While some disagreements were deescalated during Sunday’s worship event, right-wing guards shot fireworks from their pickup trucks as night fell and black-clad anti-fascists threw metal spikes on the road as a countermeasure, according to Willamette Week.

Feucht, in an Instagram video Monday, said that he called churches to help with security after seeing the confrontations the day before. He denied being associated with the Proud Boys, saying he wasn’t familiar with the group.

Chris Overstreet — an outreach pastor of Bethel Church and the School of Supernatural Ministry in Redding, California — said he helped assemble a security team for Feucht, according to a Facebook video he shared Monday.

“Antifa is trying to put fear in the church across the North West. It’s time for the church to be able to say, ‘We are not backing down. We’re not hiding in fear … We’re not going to play it safe. We’re going to be bold with our faith,’” Overstreet said.

Overstreet, in the video, said he contacted security teams that he knew were involved in churches. Overstreet said their “Christian security” did not engage in vulgar or confrontational behavior, nor did they invite the Proud Boys.

Feucht, in his Instagram video, advised: “For any believers, Christians out there, progressives, whatever you want to call yourself, woke people, that are defending antifa right now, you need to stop, because these guys are blatantly demonic.”

Dockter, who describes himself as a spiritual person from a Christian background, said such statements undermine the advocacy and the protests involving leaders of all faiths in Portland.

“There’s all of these amazing things that are happening in the faith community, but Sean Feucht is using the language of Christianity to his benefit,” Dockter said.

He is using the language of Christianity to his own benefit and in doing so sullying Christianity. That’s obvious. And now Feucht is in bed with Ron DeSantis and Erik Prince is not far behind. I will be researching this further, but Prince and his sister Betsy DeVos are dominionists. They’re not far behind. It would be naive to think so.