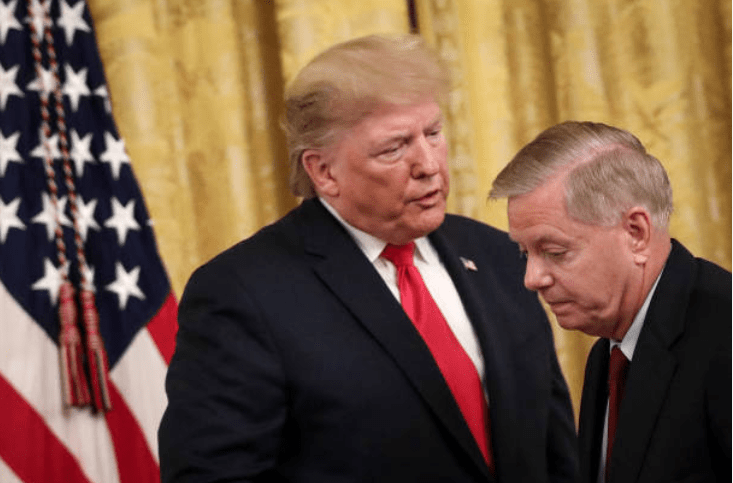 The reason for the conversion of Lindsey Graham from an affable, “self-effacing guy who was good company,” according to Hillary Clinton and dear friends with both Joe Biden and John McCain, into the Trump lap dog that he is today, has been the source of endless speculation. A tape from 2017 has been unearthed and it will intrigue you. Graham is very concerned about surveillance laws and whether the Russian ambassador’s conversations were being tapped.

You’ll see that below. But first take a look at what Graham is saying today, even as Joe Biden says, “Who in the Lord’s name does Putin think gives him the right to declare new so-called countries in territories that belong to his neighbors?”

Sen. Lindsey Graham (R-SC): "The Biden administration has misjudged Putin about as badly as anyone since the world misjudged Hitler." pic.twitter.com/dbaiNlTkrZ

So what does that translate as? The United States and the rest of the world is just supposed to go run and hide because Putin is a lunatic? And do nothing?

Now he does a flip flop from what he said yesterday. Here is that, if you missed it.

Sen. Lindsey Graham (R-SC) says "there are a few" Republicans who believe Ukraine doesn't matter, but claims the average Republican is "like Ronald Reagan, who believes in a strong world order." pic.twitter.com/a0unLKOH0S

He’s not at his most cogent, let’s just say that. He’s talking to fill air but not saying much and he certainly is not consistent.

Now listen to this tape, about seven minutes long, from 2017. I can’t embed it, but just click the C-Span link.

Share this clip far and wide. It is the 7 minutes in July 2017 when @LindseyGrahamSC realized he had been caught up in 702 surveillance, and he desperately wants to know if someone could use that call against him. #GOPCompromised #GOPComplicitTraitors

In Oct of 2017 Graham goes golfing with Trump and suddenly changes his opinion of Trump. I suspect Trump informed Graham that he knows what Lindsey said and threatened to use this info against him.

Since this golf trip Graham has been in Trumps pocket

This explanation makes as much sense as anything I’ve heard. Occam’s Razor has long decreed that the Russians have dirt on Graham and Trump knows about it.