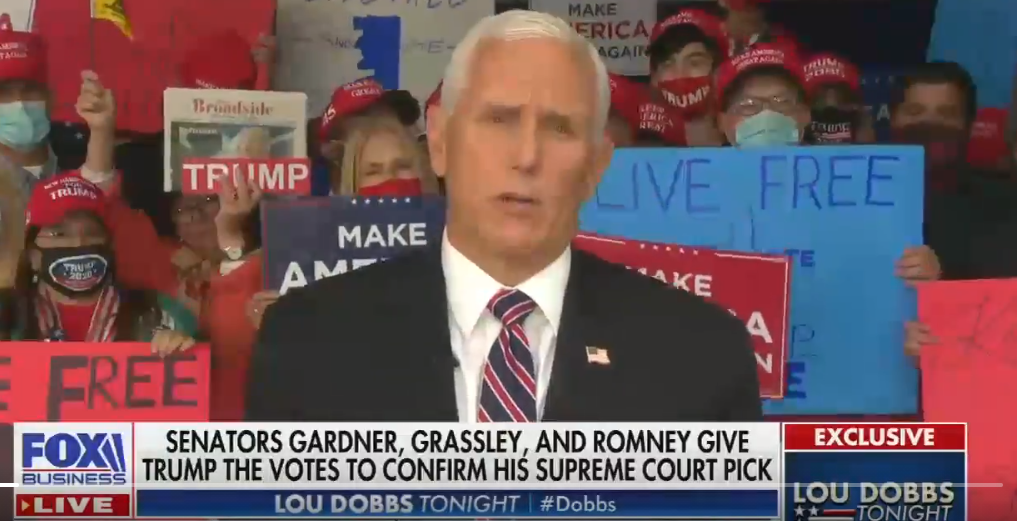 This just happened minutes ago. Mike Pence was giving a speech to the Federalist society in Florida, where he said, Let me make this clear. I did not have the right to change the results of the 2020 election. President Trump is wrong. The results of the election belong to the states and the American people, and I had no right to change it. Pence received quite a warm round of applause once he completed his speech.

Mike Pence today: “I heard this week that Pres Trump said I had the right to overturn the election. Pres Trump is wrong .. There is no idea more un-American than the notion that any one person can choose the American president.” pic.twitter.com/Pt8H4Um0MC

I’m not sure what to make of the timing, but this sure is strange. Despite being Trump’s favorite punching bag for the last 13 months, and despite having rabid rioters desperately searching to string him up, Pence has remained as silent as a cigar store Indian. Why now? And why such a forceful takedown of Trump?

How about this? Over the last two weeks it has been reported that both Pence’s former Chief of Staff, as well as his attorney had appeared in front of the J6 committee. Mark Short spent 9 hours answering questions. The committee is reportedly asking Pence to assist voluntarily. Could this be a signal?

Or how about this? Earlier this week, Trump was advised by the National Archives that beginning on March 2nd, they will begin transferring requested documents from former Vice President Pence’s office over to the J6 committee. Barring a legal challenge. Odds are that Trump will sue, but my personal feelings are that it will be summarily dismissed by the court as settled precedent, since the Supreme Court voted 8-1 against him. It would be better for trump, and increase the stall if Pence filed the suit himself over his own papers. Could this be a signal to Trump to forget it?

And one more thing to consider. Pence has not been shy about his desire to run himself in 2024. His refusal to overturn the election put him on Trump’s shit list. But this emphatic statement by Pence today is the final break with Trump, his rage will be legion. Which can lead me to only two conclusions. Either he has looked at his own popularity, as well as Trump’s, decided 2024 is a pipe dream, given up on running, and is now ready to defend himself and set the record straight for history. Or two, Pence, always the loyal soldier, has ears in the traditional, moderate GOP base, and is getting strong rumblings that they really are going to rally to purge the party of Trump and his influence. In which case Pence could be a moderate front runner, since everybody else is running the Trump playbook.

Like I said, this caught me by surprise, simply because Pence has been such an invisible jacket for the last 13 months. But it can’t be an accident. The speech took place in Trump’s back yard, and on the same day that the RNC was voting to censure Kinzinger and Cheney for actually honoring their oaths of office. There’s something more going on here that we just can’t see yet. Don’t touch that dial.