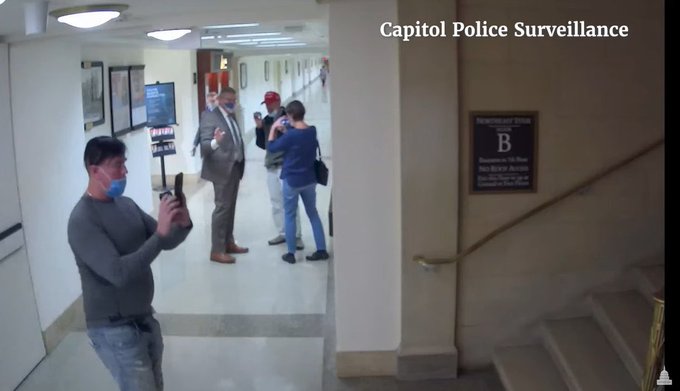 Much is being made over at Twitter about stills from a Capitol Police Security video of tourists taking pics and video of the tunnel beneath the Sam Rayburn Building that connects to the House proper.

Rep. Zoe Lofgren, who was evacuated from the House floor using that very tunnel during the riot that ensued the very day after the “tour” was given by her colleague Barry Loudermilk, has questions…

Lofgren: They took video of the tunnel from the Rayburn building to the capitol. That was the same tunnel the next day I was evacuated from… they took video of the stairwell that lead into the ways and means committee room, where 100 or so members of congress were sheltered in pic.twitter.com/EzBK2YroVo

But, no worries, Zoe, thanks to former FBI agent Peter Strzok posing this question on Twitter we have an explanation…

Well I think it's the light he was interested in. Stairs in different stages of light, like Monet's haystacks. Folks said, why are there so many haystack pictures? That looks like a boring vacation and a stupid tour. But it was the light on them haystacks. Same with the stairs.

An art student! Of course! Why didn’t we think of that!

I do love a good haystack picture. Idea: put a haystack on those well-lit stairs. We can make NFTs and clean up.

I figured he was an amateur student of architecture, with a life-long goal of discovering the secret of flying buttresses.

No doubt. And that's why he needed 4 phones to snap a picture of it! pic.twitter.com/TOMGw20ATe

I understand that as well as examine corpses for his studies of human Anatomy, Da Vinci also did extensive studies of the play of light on interior architectural details for his painting “The Last Supper”… pic.twitter.com/6Yi09gNvXD

But on the other hand perhaps Occam’s Razor applies…

He wanted to paint the Capitol… in the blood of Democratic congresspeople.

So many questions. I think the Jan. 6 Committee needs to ask Rep. Loudermilk a few.