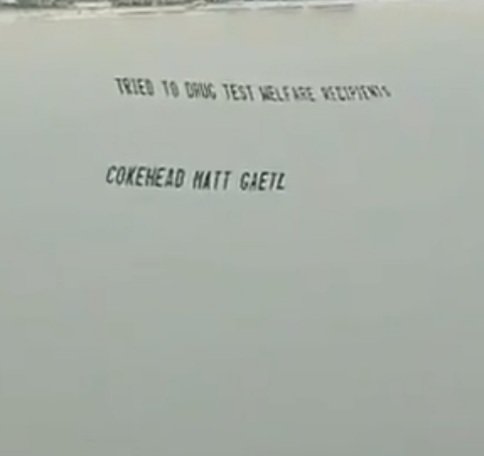 It’s another bad weekend for Matt Gaetz. He has doubled down, quadrupled and quintupled down on his best lies, and gotten Tucker Carlson to invent a new conspiracy theory for him, namely that the Capitol Riot was a false flag operation by the FBI and because Matt Gaetz is playing Elliot Ness and the FBI to task, he’s being smeared with this sex trafficking thing.

Nevertheless, the sex trafficking thing is probably going to get him indicted in the next two weeks, and other tawdry aspects of his legislative career are now coming to light. The fact that he wanted drug testing for welfare recipients is the latest issue in the spotlight.

Yes we can confirm this is us. We have been up in the skies of Florida all week flying these planes: Cokehead Matt Gaetz tried to drug test welfare recipients pic.twitter.com/NceHcZCDLw

Greenberg probe heats up with indictments possible as soon as July. Investigators focused on contracts Greenberg handed out through the tax office totaling more than $1.5 million. I hear this isn’t the only Greenberg story breaking today. Follow the money.
–Robert J.DeNault

Keep an eye peeled. The rest of us will be celebrating Independence Day on July 4th but for Matt Gaetz, independence may be a real issue by that time. Freedom will be, in any event.