There is dumb and then there is Marjorie Taylor Greene dumb.

Greene visited the Wilder Monument in Chickamauga, Georgia today, evidently thinking the 85 foot stone tower had been erected by grateful Georgians to honor their brave fallen rebel soldiers after the Civil War.

I can imagine her delight as she posted photos of her excellent adventure on every MAGA’s favorite shit-show Truth Social to bask in the anticipated accolades and claim lost cause bragging rights: 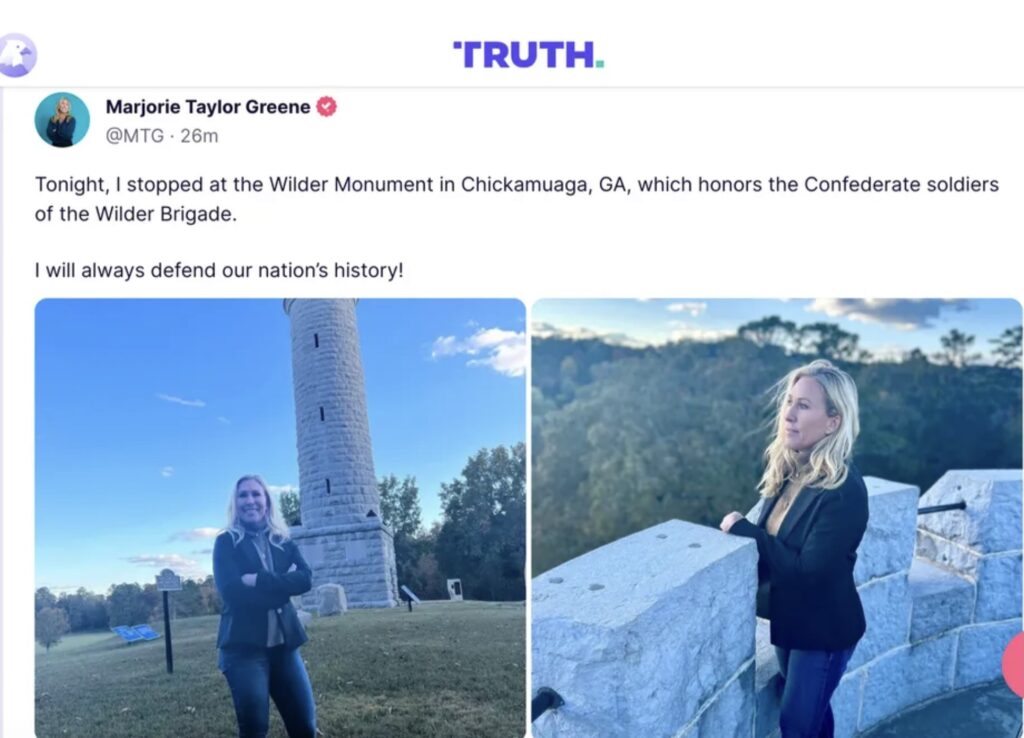 Don’t look for her post on Truth Social tho, as I know you are dying to do, because it has been deleted, the above being a screen grab of her errant honoring of history.

Because, as any Civil War buff (of which I am definitely not one) can tell you Union General John T. Wilder is the honoree of the monument, not confederate soldiers, who prevailed in the Battle of Chickamauga, despite Wilder’s valiant efforts:

… On June 24, the Lightning Brigade seized and held Hoover’s Gap. Despite orders from general Joseph J. Reynolds to fall back to his infantry, which was still six miles away, Wilder decided to hold the position, defeating repeated attempts to dislodge his force until the infantry arrived and winning the most significant battle in the Tullahoma Campaign. The Army of the Cumberland’s commanding officer, William Rosecrans soon arrived on the scene. Rather than reprimand Wilder for disobeying orders, he congratulated him for doing so, telling him it would have cost thousands of lives to take the position if he had abandoned it.”

As I said, I’m no Civil War historian, the inimitable Charles P. Pierce put me onto this story:

Per usual, she does not know where she is, or what she is doing, at any given moment.

True, but she could literally thank Abraham Lincoln for inventing the Lincoln Continental and it wouldn't move the needle.

“The Rock Head of Chicamauga”

So she's not in a rush to get her ex husband's election fraud bombshell findings out? Lol 😆

You can't fix stupid, but you can definitely make fun of it

She is not as stupid as she puts on. She's gaslighting and by people thinking she's stupid, they will underestimate her abilities to gain power

She’s like her boy drumpf, she has a certain cunning for exploiting the stupidity of others, but aside from that singular talent she is as devoid of other interests and as ignorant of history and he is.