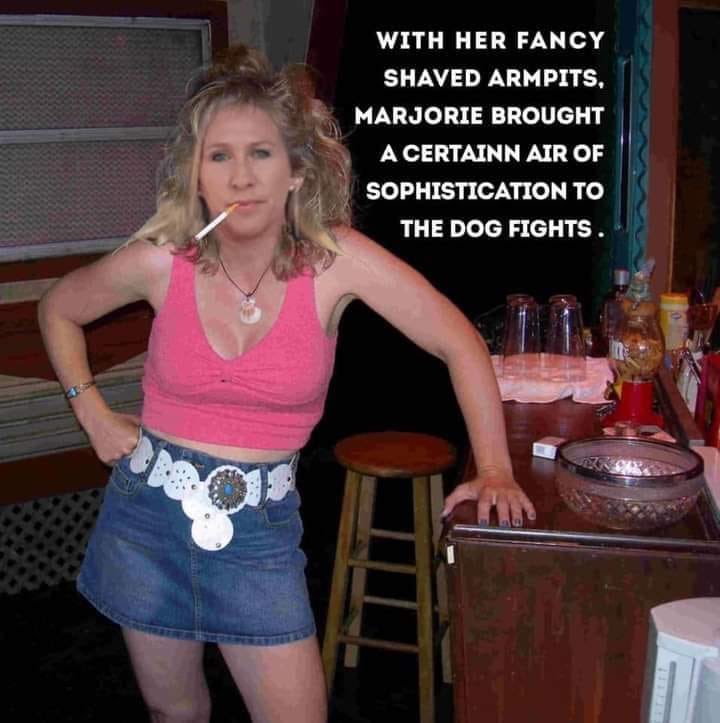 Evidently Lin Wood has decided that if his plane goes down in flames, he’s going to take the entire fleet down with him, why not? Today Wood has two other GOPers in his crosshairs, to wit, Marjorie Taylor Greene and Matt Gaetz. So far there’s no response from either, so that can be interpreted two ways: one, that they’re blowing him off, two, that they’re worried about what tape recordings he may have of them. Or three, both.

Wood has his followers on right-wing media and this is causing a schism in the right-wing world. The gauntlet has been thrown down, “Who is the biggest Christian” and that term is certainly open to interpretation and then there is the biggy, who supports Tangerine Palpatine unequivocally and with all their heart and soul? That’s the true test. After all, this is the Cult of Trump we’re talking about here, nothing more, nothing less.

And while Trump world is melting down on one end, on another it looks like fences are being mended. This is from today’s Punchbowl News Newsletter.

Last week, there was a flurry of headlines when Rep. Marjorie Taylor Greene (R-Ga.) suggested that House Minority Leader Kevin McCarthy doesn’t have the votes to be speaker.

“We know that Kevin McCarthy has a problem in our conference. He doesn’t have the full support to be speaker,” Greene said during a podcast hosted by Rep. Matt Gaetz (R-Fla.), who is definitely not a McCarthy fan. “He doesn’t have the votes that are there, because there’s many of us that are very unhappy about the failure to hold Republicans accountable, while conservatives like me, Paul Gosar, and many others just constantly take the abuse by the Democrats.” Gosar was recently censured and kicked off his committees by Democrats — like Greene was earlier this year — for posting an animated video where he killed Rep. Alexandria Ocasio-Cortez (D-N.Y.).

However, by Friday, Greene tweeted this:

“I just got off a good call with @GOPLeader.

We spent time talking about solving problems not only in the conference, but for our country.

Now, this isn’t an endorsement of McCarthy — and that’s worth pointing out. But it does go to show McCarthy is aware of what his members are saying about him and how quickly the California Republican will respond if one of his colleagues publicly criticizes him. And he knows how to work his members, what their issues are and how to address those concerns.

It’s also worth noting that Greene’s new chief of staff is Ed Buckham, who was a former top aide to ex-House Majority Leader Tom DeLay (R-Texas) at one point. Buckham’s lobbying career imploded after his firm was implicated in the Jack Abramoff scandal, and he’s kept a low profile for a long time. Yet Greene and Buckham know how to exploit the “I-won’t-support-McCarthy-for-speaker” issue for press coverage, that’s clear.

Greene’s biggest complaints are that she wants Reps. Liz Cheney (R-Wyo.) and Adam Kinzinger (R-Ill.) — currently serving on the Jan. 6 select committee — kicked out of the Republican Conference. She also wants Rep. John Katko (R-N.Y.) to lose his ranking member post on the Homeland Security Committee. Katko was among 13 Republicans who voted for the recent $1 trillion bipartisan infrastructure bill. Enactment of that legislation was a big political win for President Joe Biden and the Democrats. A number of GOP hardliners wanted Republican lawmakers who voted for it punished. McCarthy hasn’t supported that move, and a resolution to do so was buried internally by the Republican Conference without a vote.

McCarthy is going to have to deal with these public eruptions from the right during the next 13 months, especially as the likelihood of a GOP victory in the 2022 midterms grows. Dealing with lawmakers like Greene is part of what leadership refers to as “member management.” Assuaging their concerns or meeting their demands isn’t always possible, but it’s McCarthy’s job to explain what he’s doing and why.

In this instance, it seems quite obvious that McCarthy’s view is that Republicans shouldn’t be fighting when the GOP has such a big political advantage over the Democrats. Here’s how McCarthy world views Greene’s complaints: Cheney could easily lose her primary next year and Kinzinger isn’t even running for re-election. Katko will have to make his case in front of the steering committee to be Homeland Security chair if the Republicans win the majority — and that’s not a sure bet.

Of course, there are plenty of complaints about how McCarthy handles MTG and Rep. Lauren Boebert’s (R-Colo.) racist or outrageous behavior. Greene and Boebert have both called the Squad the “Jihad Squad” — principally because Rep. Ilhan Omar (D-Minn.) is an “Islamic terrorist sympathizer,” according to Greene. Boebert also suggested Omar was going to blow up the Capitol, which is disgusting and untrue. McCarthy called Boebert about the comments. Boebert later apologized and asked Omar for a meeting.

The most important issue for McCarthy — if Republicans win — will be how big a margin of control he has. Then McCarthy can see what kind of deals he has to cut with Greene or other conservatives. Newly elected GOP lawmakers will likely be a strong pocket of support for McCarthy. And as long as he continues to have the backing of Rep. Jim Jordan (R-Ohio) and other high-profile incumbents, he should be fine. We just don’t see a big enough block of anti-McCarthy votes to defeat him at this point — as long as he has enough votes to play with in January 2023.

House Republicans will be moving from the minority to the majority if they do win, another huge plus for McCarthy. Members reward their leadership for those kinds of victories. Also, with Biden in the White House, McCarthy’s job as speaker will be easy — just oppose everything the Democrats want and let the House committees investigate the administration at will. Speaker Nancy Pelosi and House Democrats ran that playbook pretty much to perfection in 2019 and 2020.

The big question mark for McCarthy, of course, is former President Donald Trump. McCarthy has had a good relationship with Trump going back to the 2016 presidential campaign. McCarthy was the first top Republican to go to Florida to see the former president when he left the White House in January 2021. McCarthy continues to speak with Trump on a regular basis.

But Trump is unpredictable, and he’ll do whatever he thinks is in his own best interest. If that’s backing McCarthy, fine. If it’s dumping McCarthy, also fine. No one in McCarthy’s orbit has any doubts about that.

Expect to hear some noise about whether Trump should take the leadership role as House speaker, when and if that becomes an issue next year. In all truth, Trump is way too lazy to take the job. He doesn’t want to have to show up every day to anywhere, except the golf course. On the other hand, it would keep him back in the news cycle 24/7 and he misses the attention. Megalomaniacs always do, that’s what makes them megalomaniacs — or MAGAlomaniac, in Trump’s case. He may just do it for the showmanship aspect of it.

Also, if there is a loophole by which Trump could use a leadership position like that to avoid prosecution in any manner, then the House Speakership would start to become a realistic possibility, horrific as it is to contemplate.