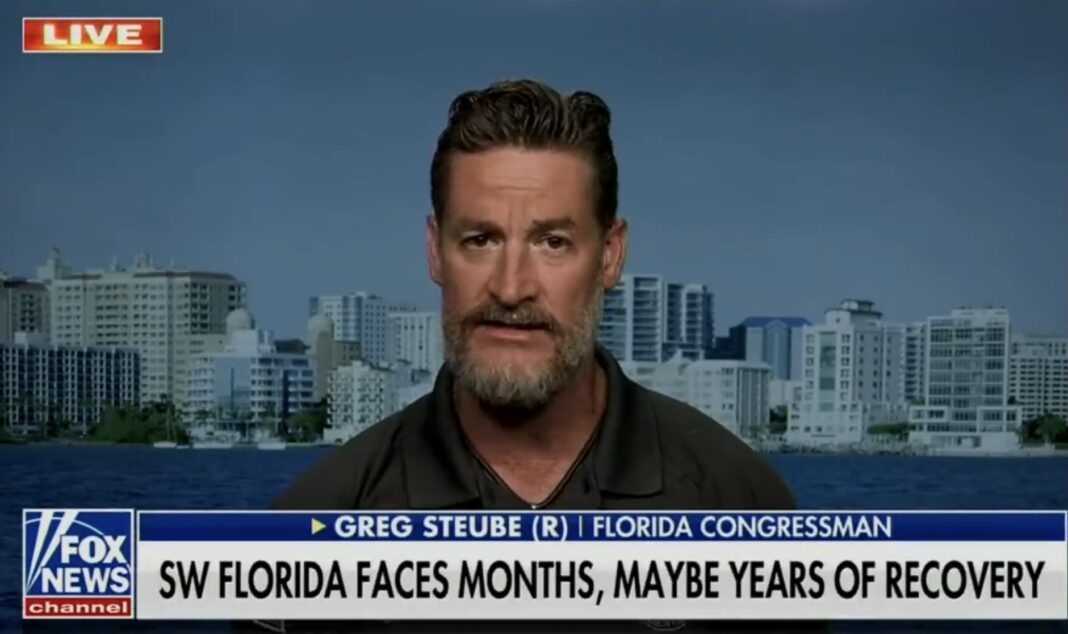 Florida Congressman Greg Steube, who voted no last week on the continuing resolution to keep the Federal Government operating into the next fiscal year, a bill that included funds for Hurricane Ian relief, is now accusing President Biden of withholding funding.

“As Southwest Florida digs out from Hurricane Ian, its representatives in Congress voted to shut down the federal government that is aiding the devastated region.

Reps. Byron Donalds (R-19-Fla.), Greg Steube (R-17-Fla.) and Mario Diaz-Balart (R-15-Fla.) all voted against the Continuing Appropriations and Ukraine Supplemental Appropriations Act of 2023 (House Resolution (HR) 6833), which kept the government operating for the next fiscal year…

“… The bill includes $18.8 billion in spending for disaster recovery efforts. In addition to Florida’s needs, it funds efforts for Western wildfires and flooding in Kentucky.

The bill also funds the Federal Emergency Management Agency (FEMA), which is assisting hard-hit Southwest Florida. The region sustained what is likely to be many billions of dollars in damages from the direct strike from the Category 4 hurricane.

Is this yet another thing these crooks are going to lie about???? pic.twitter.com/K5VOiSJIf7

Where are the Swamp People guys when you need ‘em?

Congress acted. Senator Scott voted against and Rubio didn’t even show up to vote. And all 16 #FloriDUH #RepubliQan members of Congress voted AGAINST that funding! But please, tell me more about how Congress needs to act!

That’s all they do!

He just voted against it pic.twitter.com/rs6QgoJhRL

Is that the letter asking Biden to hand over 10 billion dollars to DeSantis with no oversight?

DeSantis said they had a surplus of cash. Why not ask him? https://t.co/YmCcXDORnJ

Odd that I haven't heard any mention of bootstraps.

Something Steube pulled outta his ass?

The point is to just blatantly lie because they know their media echo chamber will pound that same drum & the truth will get drowned out, that's why America is in the trouble it's in now, the GOP has America fast heading down the same road as Bolsonaro in Brazil.

All the Republican congressmen and senators from Florida voted no on the funding. Let’s respect their feelings and not give them funding

That’s not fair to the people of Florida, but man, I understand the sentiment.

Today’s GOP… no truth, no honor and absolutely no shame.