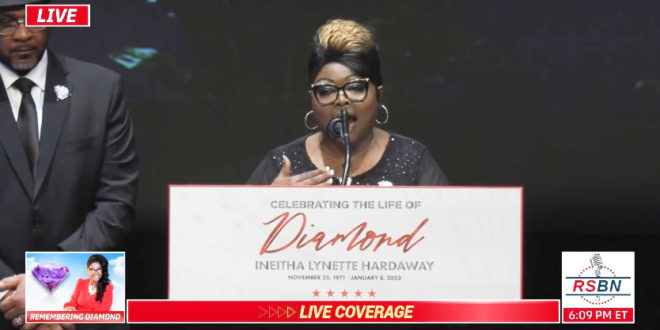 It is not enough to believe that the vaccine doesn’t work or is bad for you. No, now – according to QAnon, the people who got the vaccine can “shed” the vaccine as poison to others. It is tragic that a 51-year-old died suddenly. But maybe it’s even more tragic that Diamond’s beloved sister, Silk’s, only means to grieve is to again turn to hatred for all those liberals that got their vaccine.

It also made the memorial quite dark. After all, Trump led the service, and he claims success for Operation Warp Speed. From The Daily Mail:

The memorial for Lynette ‘Diamond’ Hardaway, half of the pro-Trump vlogging duo ‘Diamond and Silk,’ took a dark turn on Saturday as her sister, Rochelle ‘Silk’ Richardson, detailed the late 51-year-old’s final moments and alluded to a nefarious poisoning plot she claims caused her death. “Instead of asking if Americans are vaxxed or unvaxxed, the real question to ask is: Are Americans being poisoned?” Silk asked the pro-Trump crowd filled with friends and family.

That is more than too far for even a lot of “Q’s” and it caused some gasps.

“In the wild, when they want to depopulate and sterilize a large group of animals, they usually inject one animal, and that one animal infect the rest of the animals,” Silk said, suggesting, without evidence, that the COVID-19 vaccine creates harm. Silk followed the anti-vax rhetoric with a detailed retelling of the final moments her sister, 51, spoke to her. “She said to me, ‘I can’t breathe.’ It was something out of nowhere, and no warning. Each breath was less, and less, and less,” she explains to the crowd.

That sounds far more like a pulmonary embolism, heart attack, or someone with COVID. It got even weirder when conspiracy theorist Marjorie Taylor Green demanded an investigation into the vaccine because people are dying, dropping dead, left and right.

I demand an IMMEDIATE investigation into Covid vaccines and the dramatic increase of people dying suddenly!

This can no longer be ignored and is NOT political. https://t.co/5vOfMFJ57c

And then this bizarre moment:

After Silk goes on and on about how much she loves Trump and all the great times they had together, Trump gets up and says this: “I knew Diamond, but I didn’t know Silk at all. I just learned about Silk. You’re fantastic.” pic.twitter.com/jgReN5hW5C

WTF? They met on countless occasions. It was just a Trump meeting. He didn’t pay any attention to them except for their praise.

I can tell you one thing for sure, because he said it himself 5 times, Trump was definitely NOT expecting to sit through 3+ hours of hymns and stories at Diamond’s memorial service today: “They said about 15-20 minutes, in and out. This is a little longer than 15 minutes, right?” pic.twitter.com/IZgRioU3Iq

With Trump in attendance, Pastor Mark Burns gives the opening prayer at the memorial for Diamond of Diamond & Silk: “Diamond is talking to Jesus, and she is saying JESUS! PLEASE MAKE SURE THAT DONALD J, TRUMP IS THE NEXT PRESIDENT OF THE UNITED STATES!” pic.twitter.com/8tD54XK25F