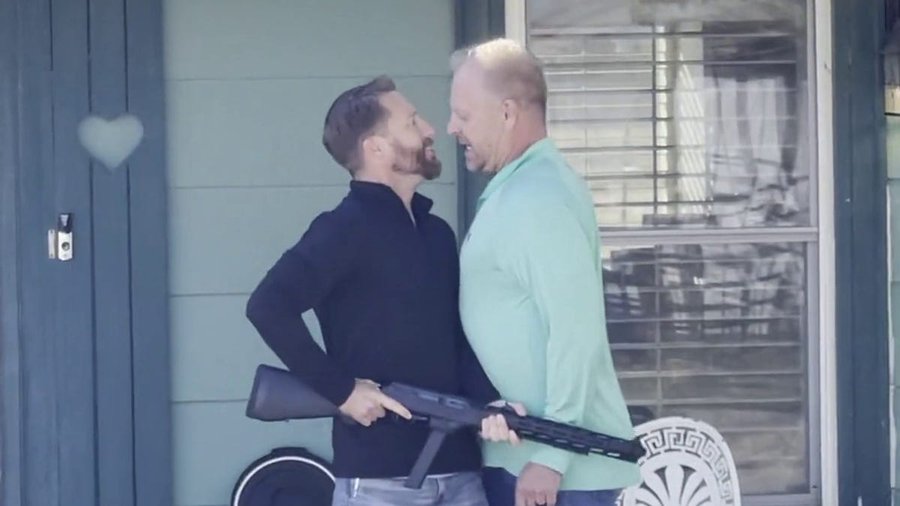 Now it begins. Now we see how the Kyle Rittenhouse verdict and Rittenhouse’s subsequent elevation to cult hero status is going to get a lot of people killed in the months and years to come.

A domestic altercation in Lubbock, Texas ended with a man shot dead on the porch by his ex-wife’s boyfriend. His widow has released a video of the incident. It’s going around social media but I haven’t found an embeddable clip. This is a link to the local newspaper which contains the video. Go there and watch it.. It’s incredibly disturbing because literally the decedent is here one second and gone the next. Plus, the shooter is just fine with the result. Just fine with having a dead body crumpled on the porch.

As you’ll see, the decedent gets into an altercation with the man who lives with his ex-wife. The two do a macho dance for a few moments and then the guy with the gun points it at the guy without the gun and shoots and that’s it. Game over. Life extinguished.

The shooter here created the life threatening situation by coming out the door, rifle in hand. Yet he’s claiming self-defense. This is nuts, but this is who we are in 2021.

Here are details from the story linked to above. Christina is the decedent’s ex-wife.

During the argument, Christina could be heard saying the child was not home and that she was going to fetch him.  She also said that she didn’t abide by the court ordered deadline because she wanted to see their son.

Chad Read threatened to subpoena multiple people in response, including Kyle Carruth’s ex wife, Judge Anne-Marie Carruth. At that point, Kyle, who previously told Chad to leave the property, emerged from the home with a rifle.

The two can be seen bumping chests as they argue. Chad Read challenged Kyle Carruth to use the weapon.

The two continue arguing. Jennifer Read, who is filming the altercation from a vehicle, tells someone off camera to call the police. Carruth is seen firing a shot on the ground at Read’s feet.

Read places his hand on the gun, propelling Carruth away from him. Carruth then spins around and fires twice at Read, who could be heard saying, “think I’m ******* scared?”

The camera pans at Read who has dropped on the ground as Jennifer Read calls again for someone to call 911.

Jennifer tells Kyle she has the incident on video.

“You did it, not him,” Jennifer Read says.

Kyle responds, telling her “I told all of y’all to leave.”

“None of you all should be here. I asked you to leave. I did everything … I did not want to do any of this.”

Responding officers arrived to find Chad dead at the scene.

And here’s the rationale by the shooter’s lawyers.

Carruth’s attorney, David M. Guinn with Hurley, Guinn & Singh, has argued that the shooting was self-defense.

“All Texans may lawfully brandish a firearm to protect themselves, their property and their business.” Guinn said.

Guinn told EverythingLubbock.com that Read threatened to take the gun from Carruth. He also said the manner in which Carruth advanced towards him poised “an immediate threat” to his client.

“This is a justifiable homicide,” Guinn contended.

And now Ken Paxton’s office will take a look at it.

So that’s it. That’s how a normal altercation among kids and exes on a normal visitation day went down on a normal weekend in Lubbock, Texas. May God help us, if this is who we have become.