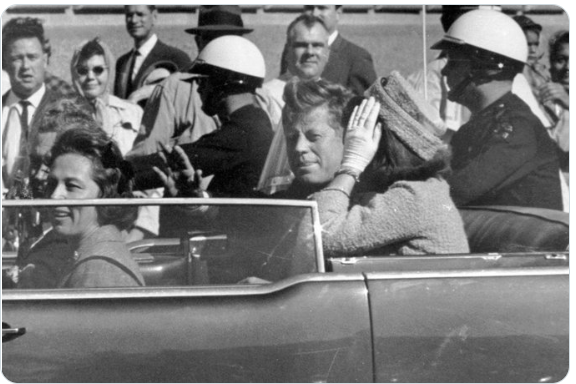 I was actually hoping that Dan Rather would say something today, on this anniversary of the assassination of John Fitzgerald Kennedy, but I went over to his substack column and he was speaking about guns and violence.

It used to be a thing, a cocktail party kind of a thing, that people would discuss “where were you the day Kennedy was assassinated?” Everybody remembered where they were. The game is not played so much anymore, because most of us who were around on that fateful day were kids when it happened. But I remember that people who were adults then played that game. It was a life altering experience, was the essence of the game. Whatever your perceptions the morning of November 22, 1963, they were altered when you went to bed that night — and many people cried themselves to sleep.

I was in the fifth grade and I well remember that my teacher, Mr. Barlow, told us before recess that the president had been shot and then we went out to recess to process that information. Come to find out later that the president was already dead, but that he and the other teachers had made a decision to do a one-two punch in order to lessen the trauma.

That could never happen in today’s era of cell phones and social media. But in that day and age, there were only TVs and radios and if there was a kid who had a transistor radio at school, it was not known to me.

It was a hellacious 25 minutes. A lot of kids cried. Other kids were scared, “What do we do now? What if he dies?” It was a new concept that somebody like The President could be made of flesh and blood and be here one minute and gone the next. We came back in from recess, where we were given the full truth and then the buses came and took us home early. I remember my father sobbing, because of course, as an Irishman, he took the murder of JFK very personally.

We watched all the footage that you have seen of that day. We watched the Zapruder film for the first time. Refresh your recollection. Here are images from that day.

You see the size of the headlines. I remember seeing both the headlines of the Rocky Mountain News (now defunct) and the Denver Post, shrieking in that size of type. I had never seen that size type in a newspaper before, nor have I seen it since.

November 22, 1963 was a Friday. America was glued to the television all that night and the entire weekend. We all saw, in real time, Jack Ruby shoot Lee Harvey Oswald on Sunday night.

This is history now. There are a few old timers, and I’m one of them, who can speak from first hand recollection and share the sequence of events as they happened in our lives. And I’m one of the few. Nobody else on this blog, I don’t think, has any first hand recollection because they were too young. Murfster and Denis were both five years old at the time and I believe Durrati was one or two years old. Michelle was in Australia, so who knows what she recalls?

As we age we see common experience age with us. There was a time I recall, as a child, when WWII was in everybody’s common experience. People talked about it. At least, the adults did and the kids knew it second hand, from their lips. It was real, it wasn’t some historical fact and it certainly was not the stuff of conspiracy theory, Holocaust denying, as it has become today.

Same with Korea, same with Vietnam. Elvis and Marilyn were real in the bygone world I’m speaking of. So was Jim Morrison. So were a lot of people who we now know only as icons.

The sixties were an amazing time. JFK’s murder was the first of three major political assassinations which would mark the decade. America changed. It changed throughout the decade of the sixties. I can personally attest to that. And that change started 59 years ago today. We were a much more innocent people then than we are now. Today, in 1963, was a major flashpoint and it marked a significant turning point in our culture.