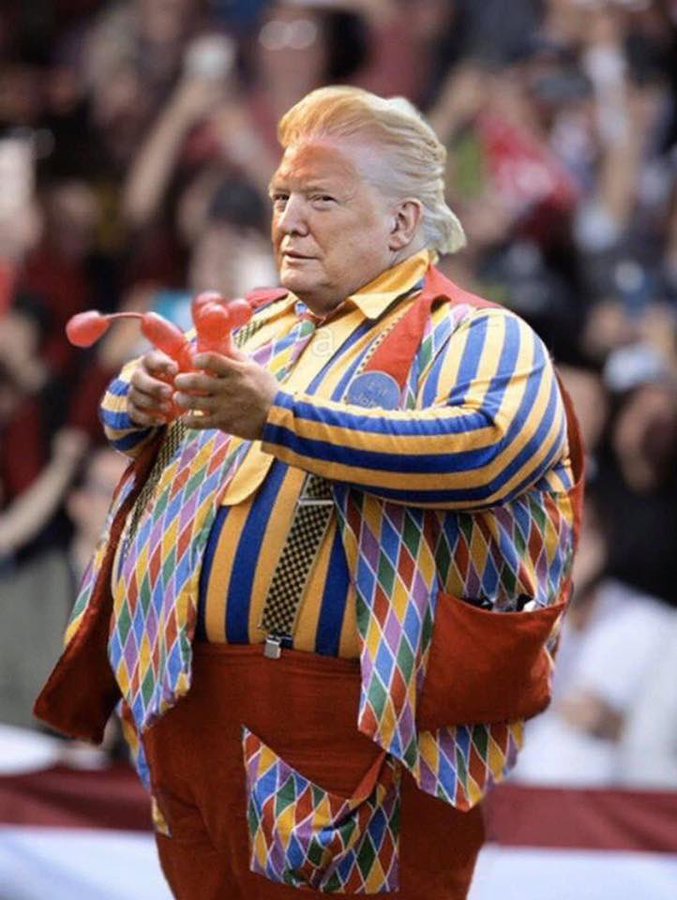 I’m sorry this is a wee tardy, but you all know that it’s hard for me to read type, and MSNBC has been monolithic on the Texas school shooting for the last 48 hours now. It wasn’t until Teri Googled last night that I finally got some primary results from Tuesday.

And right now I’m typing this upside down, since I’m walking on the ceiling. Those results on Tuesday couldn’t have been much worse for Trump if he had been running himself. Tuesday was an unmitigated disaster spreading across multiple states.

The thing about Trump is that he promotes himself as the ultimate hardass. He will hold a grudge for years, and his own White House Press corp loved repeating the tale that when Traitor Tot gets hit, he punches back twice as hard as he got. As each GOP House incumbent who defied him retired rather than face a Trombie primary, Trump gleefully kept a running tally of traitors. Funny, right now the only thing I see Trump punching is his pillow.

On Tuesday in Georgia, The Mango Messiah made waterloo look like a sterling victory for Napoleon. Incumbent Governor Brian Kemp chewed through Trump’s hand picked stooge, David Perdue like a dog going through a rawhide treat. This was bitter wormwood for Trump, who desperately wanted to pay Kemp back for his insolence in certifying the 2020 Georgia presidential results.

Then came the second knock in the nuts. In a stunning development, incumbent Secretary of state Brad Raffensperger pulled off a miracle and won his primary against Trump lackey Jody Hice by enough to avoid a runoff. This has to burn Trump’s ass more than a 4′ candle, since he was planning on a runoff between Raffensperger and Hice to throw his weight around. And now it’s all for naught.

And if two knocks in the nuts in Georgia, how about a kick in the ass in Alabama? His lowness heartily endorsed House GOP ass-kisser Mo Brooks for the open US Senate seat almost before Brooks announced. Then Brooks stumbled, tanked in the polling and Trump unendorsed that loser!, and backed a Sure fire winner instead. And a month from now, Brooks and retiring Senator Shelby’s Chief of Staff will go to a run off, while the Sure fire winner is looking around like a hurricane survivor.

I cannot tell you how bad this is for Trump’s alleged reputation as a Kingmaker. I wrote recently how a MSNBC analyst said that Trump’s endorsement power was limited to open seats, where he could tap one shitheels nobody else had ever heard of out of a field of 8 shitheels nobody had ever heard of either. But then he even fucked that up! He knee jerk endorsed Brooks for the Senate seat, and when Brooks tanked in the polls, he dumped him and endorsed somebody else instead. Immediately after, Brooks surged in the polls, and is now headed to a runoff. Gee. Ya think Alabama voters might not like candidates they see as Trump’s lap poodle?

But here’s the McGuffin. It wasn’t just Tuesday. Sure, Trump has backed a few winners. He got Herschel Walker through the primaries in Georgia, and Hillbilly JD vance through the open OH Senate primary. And he endorsed J6 insurrectionist Doug Mastriano in the PA Governor’s race the weekend before the election. But not even including Tuesday’s results, just look what has happened lately in Trumptopia;

Trump can spin this any way he wants, but he can’t make a silk purse out of a sows’ ear. Trump is in deep kimchi here. In the races that really matter, he isn’t even batting 500. It will only get worse, because there are more of these kinds of matchups on the ballot. And News Flash! The 2012 GOP called, and they want their party back. Former Trump GOP stalwarts like Miles Taylor, and Olivia Troye with her Republicans for Accountability have found the secret. And that’s to beat Trump endorsed candidates in the primaries, so that they never get to the November ballot, weakening his hold. This is going to get interesting.