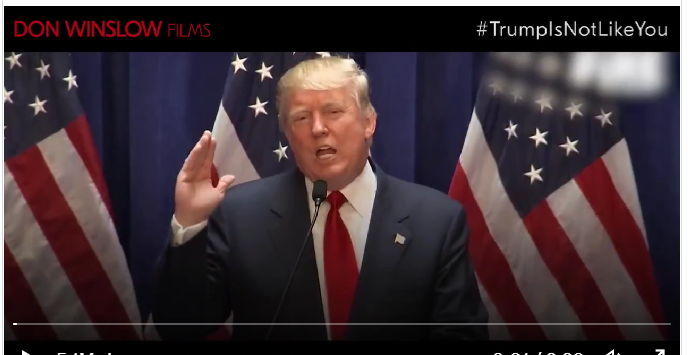 Occasionally one stumbles upon a jewel on Twitter and this is one of those times. We are almost on top of the midterm elections, one week from tomorrow. The Don Winslow film you’re about to see aired September 8, 2020.

I wish we could get this retweeted far and wide because it is the essence of what has gone wrong in this country and what we are seeking to redress in next week’s election.

Very simply, Donald Trump has conned millions of people into believing that he is like them. He is nothing like them and moreover, he loathes them. That is the tragedy of having the man rise to the level he did in the political life of this nation. That is why he is so toxic and has poisoned the political groundwaters like he has. It’s all a lie. Yet the MAGAs believe it and they eat it up.

The irony of Trump is that his followers identify with him and believe he’s one of them because he is a low life who wants to burn down the establishment and they love that, because that’s how they feel. He is their id. He is the persona to their shadow, as Sigmund Freud would say. He says out loud what they have always felt and he gets away with it.

But what they don’t realize is that he gets away with it because he has lived a consequence free life due to the fact that he’s never worked, as the rest of us have. He got Daddy to front him millions of dollars and he kept squandering money on harebrained ventures and going bankrupt.

He cobbled together a reality TV vehicle that was on the air for fourteen years and he didn’t work at that, either. His success was due to the legion of professionals who made him look good.

Then he got the GOP to cosign on his madness and you know all the rest.

This is the truth. This is the Big Lie, or maybe I should say the original Big Lie, that Trump is like his followers. And it is even more pernicious and damning than the Big Lie of the stolen election.

Trump’s not on the ballot this cycle but Trumpism is. MAGA is. The Big Lie is. Whether people realize it or not, fascism is. Only by defeating Trump endorsed candidates can America be safe for democracy.