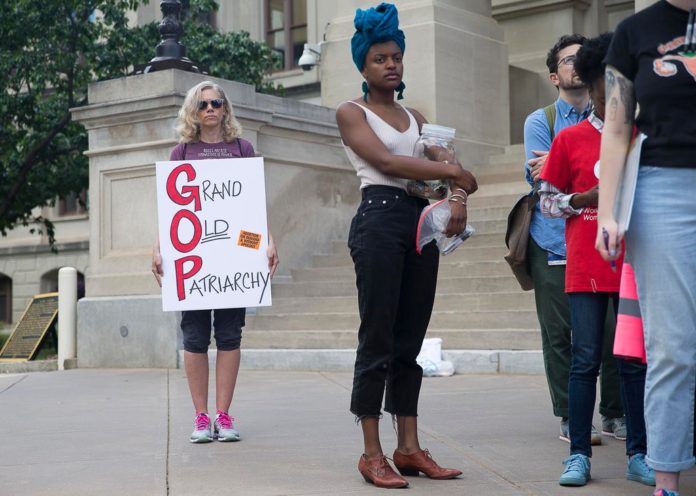 As is so often the case with conservatives in power, THEY of course won’t have to suffer the consequences of the life and difficult life circumstances they impose on others.   THEY of course will, if they need access to an abortion to hide an indiscretion or for some medical reason or even as a pure choice that they simply don’t want another child will be able to engage in “medical tourism” to get or help someone that matters to them an abortion.   Or prescription birth control for that matter.   Thomas said what his fellow Fascist brothers and sister probably didn’t want to say just yet but make no mistake – THIS Court will be taking up the issue of access to prescription birth control in the foreseeable future.

And striking that down too.  (But like I said they and theirs will of course be able to get it on the sly!)

Look, we knew this was coming.   Ever since Ruth Bader Ginsburg passed away and even though early voting was already underway and McConnell assured Trump he’d ram another right wing “Christian” zealot onto SCOTUS we knew it was coming.   I’ve said it before and I’ll say it again – champagne corks popped in ultra conservative homes in DC and around the country when the news of RBG’s passing broke.   Even before it was dug I know some went to dance on her grave before it was even dug.   And they even held a goddamned super-spreader (Covid) party at the WH to announce Barrett’s appointment, making Roberts irrelevant to keeping Roe as precedent.   (For anyone reading this who is “outraged” by what I just said go screw yourself.   You know it’s true if if you deny it you are not only a lying – if only to yourself – but a goddamned liar!)  So in the end he went along with the crowd instead of continuing his incremental approach to just whittling away at it.

The actual case before SCOTUS was about reducing the standard for “viability” downwards.  But the other five Federalist Society Fascists decided to go way the hell beyond the case in front of them and just do what they ALWAYS intended to do if they ever got the chance – overturn Roe v Wade.   No one, and I mean NO ONE believed Trump’s three appointees when they talked about respecting precedent and mouthed platitudes about Roe being “settled” or “law of the land.”  We knew they were LYING through their teeth.   They knew we/everyone knew.  And we knew they knew.

It was flat out perjury.

The same could be said of Alito and Thomas.

They are oh so pious, wearing their perverted “Christianity” on their sleeve.   What’s that Commandment about bearing false witness?   When they were literally witnesses sworn under oath to tell the truth?    Oh yeah – in plain English it says DON’T LIE!   Lying is a big-time sin against God!   And they lied their asses off.   Under Oath.   And they made effing sure to add the “So help me God” part at the end of their oath to answer questions truthfully!

Never before in our history has SCOTUS recognized a right (in this case privacy – and on this subject the privacy to make one’s own choices about whether to carry a pregnancy to term) and then turned around and taken it away.   Think about that.  Never.  NEVER!

Look, I’m an old white male.  Never had kids.   I do however have higher education in as well as experience counseling and I’ve helped a number of people and couples (including one that I won’t be specific about for their privacy but would truly surprise you) sort through what to do about an unplanned and/or unwanted pregnancy.   I tried to be responsible back during the time in my life when sex was one of life’s delightful pleasures and fortunately never had to have a conversation with a partner about what to do.   But I get, as much as a person who hasn’t been faced with that choice can get how difficult, even gut wrenching it can be.

Now?  For countless women (and men who support their choice one way or the other) there is no choice.   “Christian” fundies, who’s Jesus never said a single word on the subject (and abortion WAS practiced in his time and even today Jewish canon dictates it’s required to save the life of the mother) can now enforce THEIR personal religious belief that a whole human life is created at conception and must be protected on everyone else.   Of course, when that unplanned/unwanted baby is born and the mom/parents who maybe couldn’t afford the bill for the birth, much less the costs of raising it, and/or the extra expenses of a child it was known would be born with special needs/medical problems needs help those same zealots won’t be anywhere to be found.

Except to offer harsh judgements on how the mom/parents should have thought about that before they had sex.

Slavery is supposed to be illegal and unconstitutional.   As I see it SCOTUS has just said that any woman who becomes pregnant, even if all these magical adoptive parents right-to-life folks say are out there ready to step in showed up a woman is subjected to a form of slavery – being a human incubator.   She might lose her job or have her career set back.   That it turn might affect other children she has negatively.   Countless families will struggle even more than they already do.

I’ve really struggled not to go full jarhead grunt with my language while writing this because I want it to get shared.   I will however pose a question for anyone who reads this and is soooooo convinced that from the moment a sperm enters an egg a whole human life has been created.   Biologically it’s proven that a good thirty percent or more of fertilized eggs and/or blashocysts pass right on out of a woman’s body.   They never implant in the uterine wall and create an actual pregnancy.   Then there are ectopic pregnancies (literally life threatening and do kill women if not detected and treated in time), miscarriages, stillborns and so on.   Reproduction, even in primates including “evolved” ones like humans is incredibly inefficient.

So my question for you religious types who are so, so sure of yourselves is that if life begins at conception then why is that God you worship and cite as your authority for your position the biggest abortionist of all?

The answer can be traced back to Puritanism (and yes, abortion via potions and tonics was widely practiced in colonial America – even Ben Franklin had a special tonic often used!) and I can’t help but think of a quote from H.L. Mencken:  “Puritanism is the haunting fear that somewhere, someone may be happy.”   You modern Puritans extend that to the extreme – and only want a handful of women to be able to live fully free lives and make choices including whether to have a career, a child or even to have sex just for enjoyment and not have to worry about an unwanted pregnancy.   And guys?   Get ready to start having to use “rubbers” again because that’s a coming.   The wheel goes round and it won’t be long until condoms are the only means of “legal” birth control – and we’ll once again (like when I was a kid in the 60s) see condom machines in public restroom with big letters saying “For Prevention of Disease Only” (wink wink, nod nod!)

This has gone on longer than I intended but I want to conclude how it started with the Title.   For every one of those Fascist Federalist Society “Justices”, every Senator who voted for their confirmation, and every person out there rejoicing in what they have inflicted on women I say roasting in hell is too good for you.   If I had it my way, EVERY effing one of you would spend eternity in the late stages of labor.   Being a guy I of course don’t know what that’s like but I’ve had plenty of women who’ve had kids try to explain it and I known damn well I wouldn’t want to go through it.   Much less FORCE someone else to.

If there is a God (and being agnostic and seeing the world as it is) I have my doubts about there being an all-wise and just God, but if there is I truly hope he will have a little chat with Satan and work out a deal for you self-righteous a-holes who DEMAND everyone believe what you do to spend your eternity suffering as much as possible with the most painful labor that any woman has ever experienced.  (Even that is too good for you but it’s the best I can come up with for now)