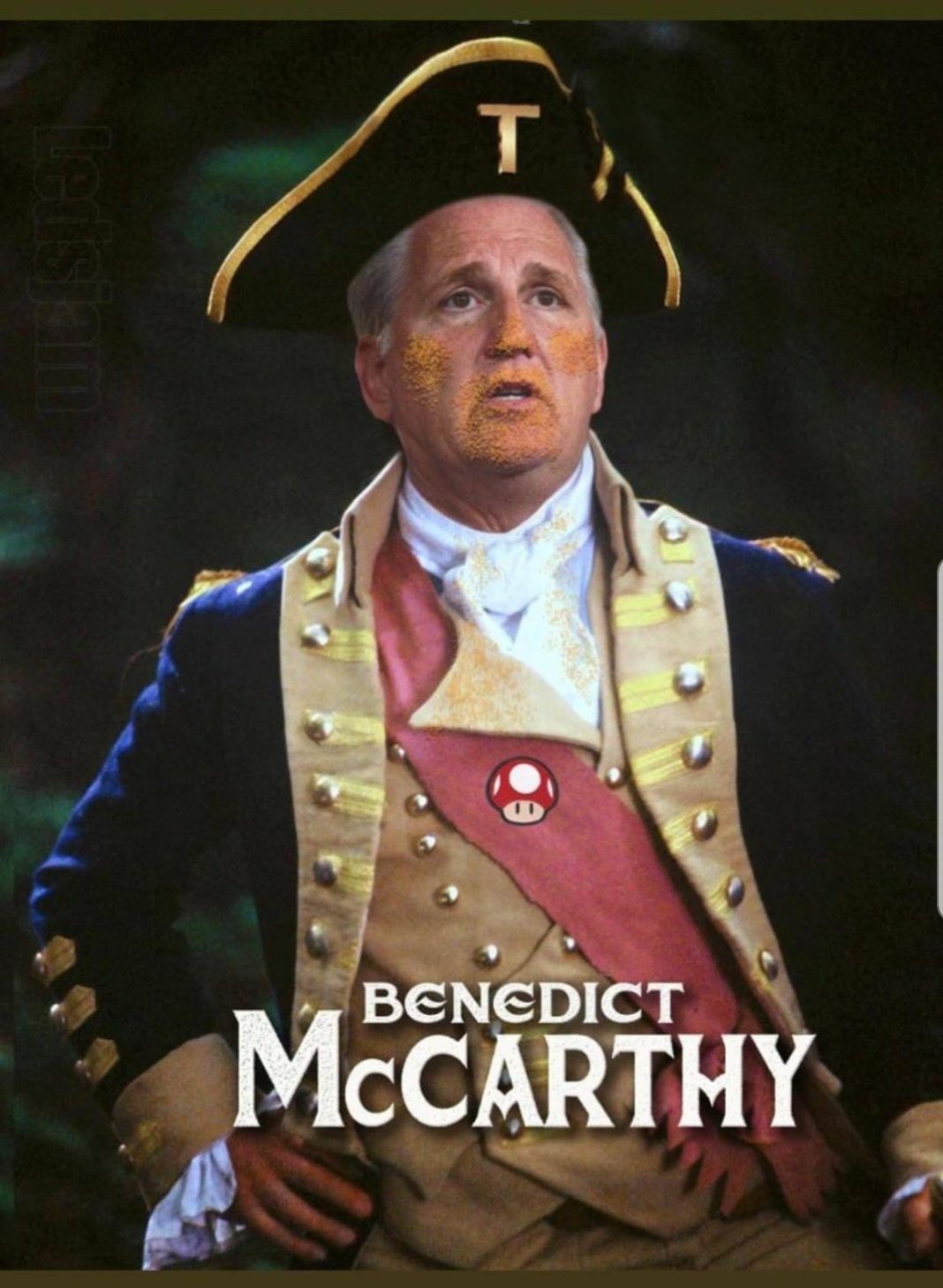 This just keeps getting better and better. Katie Phang reported today on The Beat on MSNBC that Trump sock puppet Kreepy Kevin McCarthy is in deep kimchi. Today another GOPtard publicly came out as a hard NO vote on McCarthy for Speaker. That brings the hard NO total up to 6. But Happy Thanksgiving Kevin, cuz she went on to report that there’s an actual Never Kevin movement out there in the House GOP. With the current House projection, McCarthy can only afford to lose 4 votes, so he’s already 2 short in the ante. And just for shits-n-grins, all of the caucus members haven’t even declared yet! It can only get worse from here.

Which begs the burning question. If McCarthy goes down in flames, as he did in lis last run for the job following John Boehner’s sudden retirement, who comes next? In 2015 McCarthy was an outside shot, Paul Ryan was the moderate favorite, and won in the pre Trump days. If McCarthy crashes and burns, who’s in the on deck circle?

Fortunately Katie had former RNC spokesperson and current senior partner at The Lincoln Project, Tara Setmayer right there to ask. Setmayer’s response was a short laugh, followed by That’s a good question Katie, and a problem for the GOP. McCarthy has been so craven and pandering in his role to set himself as the heir apparent to the job that nobody else in the party has seriously opposed him. If McCarthy flops, there’s no clear consensus pick behind him. If I had to guess, I’d say the next top 2 contenders would be numbers 2 and 3 in GOP leadership, Steve Scalise and Elise Stefonik.

Great job Tara, you never disappoint. And in any other circumstances I’d be right there with ya lass, they’re the 2 most logical choices to line up behind McCarthy for a shot at the gold ring. But there’s just one problem. These ain’t normal circumstances, and if you do a little simple math, the numbers aren’t there for either one of them than they are for McCarthy, and they never will be.

Because the current GOP caucus is the modern version of urban warfare. I look at the Trumpaholic caucus and the Teabagger caucus as the political equivalents of The Crips and The Bloods. They are diametrically opposed to each other, and no matter who is nominated, both sides are going to want absolute fealty from them, which won’t work. Which is a non starter. But let’s just say that the 2 sides hold a peace summit and come up with a consensus candidate. They’re still dead in the water, because even if you meld the two factions together in unison, They STILL don’t have the requisite 218 votes to seal the deal!

Yeppers, here comes that pesky 20-25 member Conservative caucus again. And they are the ultimate kingmakers in this for a simple reason. Neither other side dares to strongarm them, or threaten them with dire consequences, simply because they Need their freakin’ votes! No matter who the other 2 caucuses nominate, that candidate is going to have to negotiate and horse trade with them. And good luck with that. Because these House conservatives are not a unified bloc. They are 20-25 individual members, each beholden to their constituents, and not a binding ideology. And the nominee is going to have to deal with each one of them, already knowing that it only takes 4 of them individually to give a Nero’s thumbs down to sink their candidacy.

God willing, I’ll be 66 in February, and I’ve been addicted to this political shit for 50 years, and I’ve never seen anything like this. In the limited research my eyes would allow, the closest I could find was more than 100 years ago. In that instance, it took the closely divided congress a record 106 ballots to finally confirm a consensus Speaker everybody loathed. And if anything even resembling that happens to this GOP caucus, it is truly a nightmare scenario.

Because here’s the kicker. By rule, the new House can conduct no business in the new term until a Speaker is chosen. Which means that no bills may be offered or debated, no committee assignments made be made, hell, the House cafeteria turns into a pot luck because there’s nobody to give them a menu for the week! This is the ultimate definition of gridlock.

And if that happens, then it’s a slow moving Trumpster Fire for the House GOP. After all, they want to hit the ground running with totally useless investigations into Hunter Biden’s laptop, and impeaching everybody with a D after their name in the administration. But it takes time to nominate and confirm the committee members, and more time for the new committees to interview and select their staffs. And time is the one thing that the GOP House caucus doesn’t have. Because they only have about 13 months for their nonsense before the media’s coverage turns to the 2024 primaries, and pushes them down to the B-List. They can’t afford this lost time, but they have no choice, do they?

The more I break this down, and crunch numbers and options, the more I’m starting to believe that we may have a political Unicorn on our hands. The more the GOP flounders, the more time the Democrats have to poll their caucus for an acceptable compromise candidate, and make an approach to the moderate GOP caucus. And if they can peel off a simple 4-5 moderate GOP members, then one of them can place the name in nomination, and the vote will have to be held. And we could end up with a moderate Speaker more interested in moving the peoples business forward than in the bullshit. Stranger things have happened. I think.

One last thing. Barring some cataclysmic event in the next 12 hours, I will likely be taking tomorrow off. Hell, everybody else is. With it just being Teri and I, we make out bone in turkey breast and homemade stuffing in the crock pot for 10 hours, which means that our locals joint has a few penny slots with our names on them in the afternoon. But I want to take this moment to thank each and every one of my dear readers for your patronage, wish you the happiest Thanksgiving ever, and a joyous start to your holiday season. We’ll see ya in a day or so.