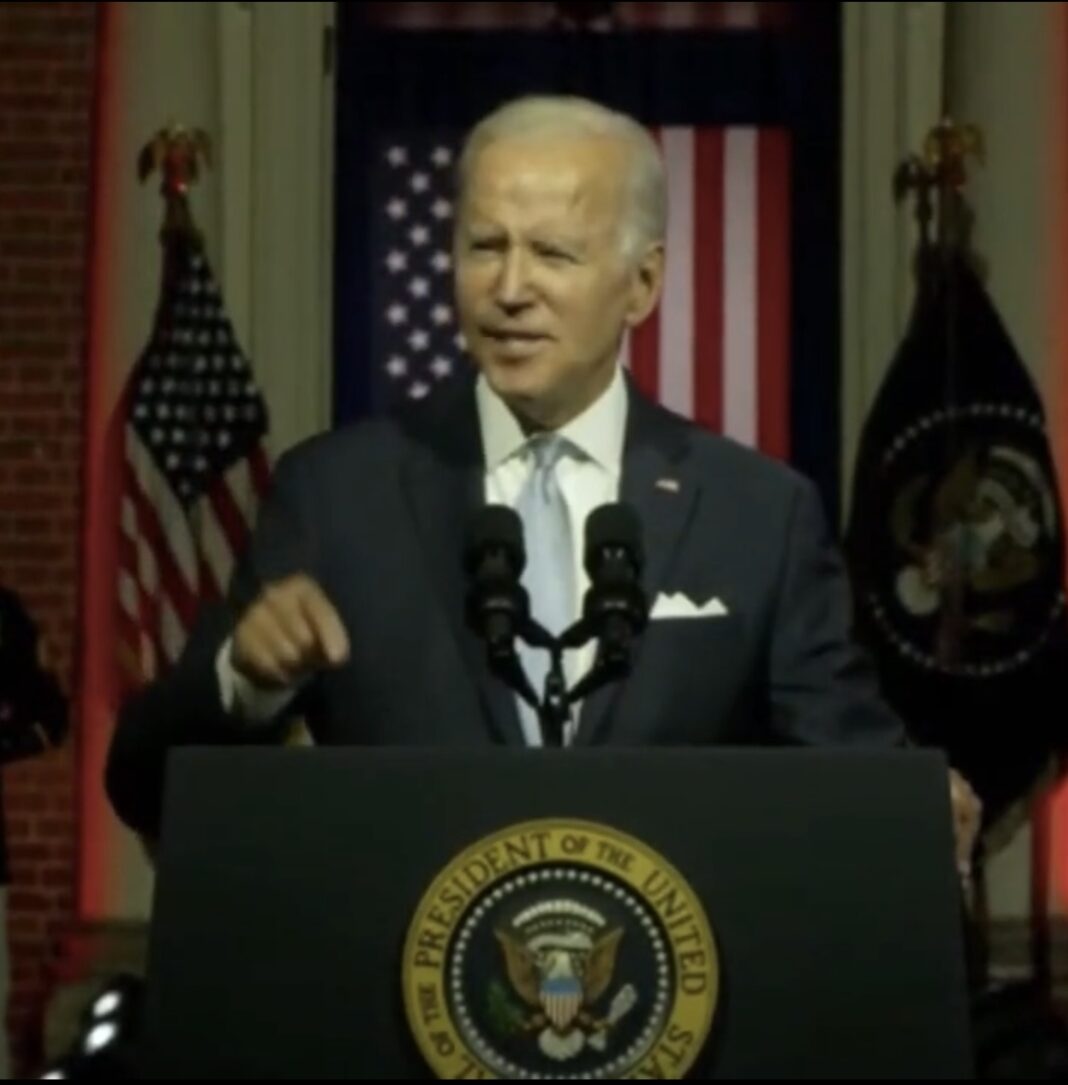 Tonight in Philadelphia President Biden threw down a gauntlet at the feet of those who would determine our future with a toxic mixture of lies, threats of violence and repression.

Joe Biden is experienced enough to know that that gauntlet will be picked up by many – many who are covetous of power over women, over even greater hoards of wealth, over even the souls of their fellow citizens.

A Speech on Democracy by President Joe Biden https://t.co/f3KCnQRhHL

“I speak to you tonight from sacred ground and American Independence Hall in Philadelphia, Pennsylvania.

This is where America made its Declaration of Independence to the world, where two centuries ago with an idea unique among nations and in America: We’re all created equal. This is where the United States Constitution was written and debated.

This is where we set in motion the most extraordinary experiment of self-government, the world has ever known.

With three simple words, “we the people … we the people.” These two documents and the ideas embody equality and democracy … [and] are the rock upon which this nation is built. They are how we became the greatest nation on earth.

They’re why, for more than two centuries, America has been a beacon to the world. As I stand here tonight, equality and democracy are under assault.

We do ourselves no favor to pretend otherwise.

But tonight, I’ve come to this place where it all began to speak as plainly as I can to the nation about the threat we face, about the power we have in our own hands to meet these threats, and about the incredible future that lies in front of us if only we choose it.

But never forget. We the people are the true heirs of the American experiment that began more than two centuries ago.

We the people are burning inside of each of us. The flame of liberty that was led here in Independence Hall. The flame the lit our way through abolition, the Civil War, suffrage, the Great Depression. World Wars, civil rights.

Now in our time—as we build an America that is more prosperous, free and just—that is the work of my presidency. A mission I believe in with my whole soul.

But first, let’s be honest with each other and with ourselves.

Too much of what’s happening in our country today is not normal.

Donald Trump and the MAGA Republicans represent an extremism that threatens the very foundations of our republic.

But there’s no question that the Republican Party today is dominated, driven and intimidated by Donald Trump and the MAGA Republicans. And that is a threat to this country. These are hard things.

But I’m an American president. Not a president of red America, blue America. For all Americans.

“MAGA Republicans do not respect the Constitution, do not believe in the rule of law. They did not recognize the will of the people and refuse to accept the results of a free election.

And they’re working right now, as I speak in state after state, to give power to the side elections in America. To partisans and cronies, empowering election deniers and undermine democracy itself.

They promote authoritarian leaders and they fanned the flames of political violence that are a threat to our personal rights, to the pursuit of justice, the rule of law, the very soul of this country.

And look at the mob that stormed the United States Capitol on January 6, brutally attacking law enforcement, not as insurrectionists placing a dagger at the throat of our democracy, but they’re looked at as patriots.

They see their MAGA failure to stop a peaceful transfer of power after the 2020 election as preparation for the 2022 and 2024 elections.

They tried everything last time to nullify the votes of 81 million people.

This time, they’re determined to succeed in thwarting the will of the people.

That’s why respected conservatives, like federal Circuit Court Judge Michael Luttig, has called Trump and extreme MAGA Republicans a clear and present danger to our democracy.

“While the threat to American democracy is real, I want to say as clearly as we can: We are not powerless in the face of these threats. We are not bystanders in this ongoing attack on democracy.

There are far more Americans, from every background and belief, who reject extreme MAGA ideology than those who accept it. It is within our power. Folks, it’s in our hands, yours and mine, to stop the assault on American democracy.

I believe America is at an inflection point, one of those moments that determine the shape of everything that’s to come after. And now America must choose to move forward or to move backwards. To build a future or obsess about the past. To be a nation of hope and unity and optimism or a nation of fear … and of darkness.

I agree Republicans have made their choice. They embrace anger. They thrive on chaos. They live not in the light of truth but in the shadow of lies.

Together we can choose a different path. We can choose a better path forward to the future. A future of possibility, a future to build and dream and hope. We’re on that path moving ahead.

This is a nation that rejects violence as a political tool. We do not encourage violence. We are still Americans who believe in honesty and decency and respect for others. Patriotism. Liberty. Justice for all. Hope. And possibility.

We are still at our core a democracy, and yet history tells us that blind loyalty to a single leader and a willingness to engage in political violence is fatal to democracy. For a long time, we told ourselves that American democracy is guaranteed. But it’s not.

We have to defend it. Protect it. Stand up for it. Each and every one of us. That’s why tonight I’m asking our nation to come together and unite behind the single purpose of defending our democracy regardless of your ideology.

We are all called by duty and conscience to confront extremists who put their own pursuit of power above all else. Democrats, independents, mainstream Republicans must be stronger, more determined and more committed to saving American democracy than MAGA Republicans are to destroying American democracy. We the people will not let anyone or anything tear us apart.

Today, there are dangers around us, we can’t allow them to prevail. We hear, you heard it: more and more talk about violence as an acceptable political tool in this country. It can never be an acceptable tool.

I want to say this plain and simple: There is no place for political violence in America. Period. None. Ever.

You saw law enforcement brutally attacked on January the 6th. We’ve seen election officials, poll workers and volunteers of both parties subjected to intimidation and death threats. Can you believe it? FBI agents just doing their job, as directed, facing threats to their own lives? From their own fellow citizens?

On top of that, there are public figures—today, yesterday, the day before—predicting and all but calling for mass violence and rioting in the streets. This is inflammatory. It’s dangerous. It’s against the rule of law. And we the people must say, ‘This is not who we are.’

Ladies and gentlemen, we can’t be pro-insurrectionist and pro-American. They’re incompatible. We can’t allow violence to be normalized in this country. It’s wrong. We have to reject political violence with all the moral clarity and conviction this nation can muster. Now, we can’t let the integrity of our elections be undermined, for that is a path to chaos.

Democracy cannot survive when one side believes there are only two outcomes in an election: either they win or they were cheated. And that’s where the MAGA Republicans are today. They don’t understand what every patriotic American knows: You can’t love your country only when you win. It’s fundamental.

American democracy only works only if we choose to respect the rule of law and the institutions that were set up in this chamber behind me. Only if we respect our legitimate political differences. I will not stand by and watch elections stolen by people who simply chose not to accept an idea. I will not stand by as the most fundamental freedom in this country, the freedom to vote and have your vote counted, be taken from you and the American people.

As your president, I will defend our democracy with every fiber of my being. And I’m asking everyone to join.

Throughout our history, Americans often made the greatest progress coming out of some of our darkest moments, like you’re hearing that bullhorn (someone could be heard shouting in the background.) I believe we can and must do that again.

MAGA Republicans look at Americans and see carnage and darkness and despair. They spread fear and lies, lies both for profit and power.

I see a different America: an America with an unlimited future. An America that is about to take off. I hope you see it, as well. Just look around. I believe we can lift America from the depths of COVID, so we passed the largest economic recovery bill since President [Franklin Delano] Roosevelt, and today, America’s economy is faster, stronger than any other advanced nation in the world.”

While not as eloquent as FDR, or John Kennedy or Dr. King, Biden has courage.

There will be a lot of anger tonight, tomorrow and for the foreseeable future.

Let us all meet it with the same determination and grit the President displayed tonight.