There’s a story here and then there’s a story within a story and the back story may actually be the most interesting one. Let’s start there. Donald Trump has been reinstated on Twitter for half a day now. He has been silent. But he did go on Truth Social Sunday afternoon to bludgeon New York Times columnist Maureen Dowd for calling him a “macho macho victim” whose return to politics is a joke — and a psychologically insightful one, at that.

This editorial hit home and I must say it’s one of the best takedowns of Trump that I’ve read and that’s what I do all day, is read about politics. New York Times:

… The arsonist seeking a job as a firefighter. He is the liar and con man who undermined confidence in our elections. All that baloney about rigged voting has only hurt Republican participation and swung independents and even some Republicans who were sick of Trump to Democrats. But he doesn’t care, so long as he can deflect the blame for his loss.

“As I have said before, the gravest threats to our civilization are not from abroad, but from within,” Trump said at his flaccid, whiny announcement Tuesday night at Mar-a-Lago.

That is actually true, but only because Trump exploited every dark division and base impulse he could find. He would rather blow up our democracy than admit he’s a loser, and that makes him a traitor.

Whiny and flaccid are spot on descriptors of Trump. That’s why he hit the roof when he read this. But again, he didn’t hit the roof on Twitter and these two stories are interwoven. He hit the roof on Truth Social and that’s published below, when he could have used the big platform. There is much to be learned from this scenario. This is only the first scattering of breadcrumbs in a trail that’s going to lead where, we know not.

Trump flaunts his faux Macho Macho Man rhetoric. For decades, Republicans have lectured Americans to quit embracing victimhood and stand on their own two feet, and here’s their leader announcing his presidency on a platform of Woe is me! Quit picking on me! Elect me because I’m a fall guy!

“I will tell you I’m a victim,” Trump said to a less-than-festive gathering where Melania seemed like a hostage and Ivanka was a no-show.

His vision was not exactly uplifting: “We will be attacked. We will be slandered. We will be persecuted just as I have been.” It made “American carnage” seem like “Roman Holiday.”

Trump’s martyrdom extends to his life with Melania in an oceanside resort, which he said, “hasn’t been the easiest thing.”

It wasn’t really an announcement so much as another Trump scam to fend off prosecutions and to keep raising money from his supporters.

The editorial is no holds barred. And so that brought about this riposte from Trump — on Truth Social — why Truth Social? When he’s got over 53 million followers on Twitter, waiting for word one? 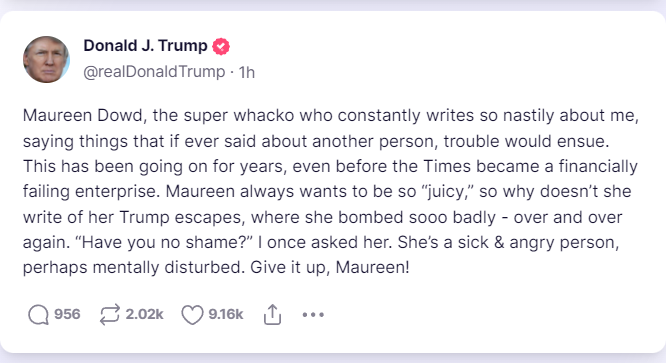 Intriguingly, he plays victim in the first sentence here — which is precisely what Dowd has just said about him! But then Donnie was never known for his self-awareness now, was he?

So we get to the end of the trail, at least for the moment, and the question hangs, why did he not use Twitter? He used social media today, but not Twitter?

A couple of reasons: Trump did sign an agreement that everything that he posted on social media would be posted first on Truth Social and then eight hours later could be reposted on other social media. Maybe he’ll post the Maureen Dowd critique on Twitter tonight, after it’s been eight hours.

Or, maybe Trump really is going to forego using Twitter. Wouldn’t that be a hoot? There are a couple of reasons he may do this. I found this in Politico Playbook.

Trump Media and Technology Group, which owns Truth Social, was set to be taken public by Digital World Acquisition (DWAC). DWAC has been seeking a shareholder vote to extend the deadline for the takeover, but that vote has been delayed six times. It’s now scheduled for Tuesday. According to The New York Post , it’s not going well. If the extension vote fails, Digital World could be liquidated on Dec. 8.

DWAC’s shares slid all last week. Maybe Elon Musk wants to cripple Truth Social and force Trump back onto Twitter? May be. Apparently, Musk believes Trump will come back when he tweeted today , “The most entertaining outcome is the most likely – my variant on Occam’s Razor.”

It will be interesting to see how the Twitter saga unfolds. This may be a big flop. Musk may end up being the naughty boy who let all the baddies back on Twitter because ha ha, he was going to own the libs and it may not amount to a hill of beans — except that it’s one colossally expensive hill of beans. And Musk is picking up the check.

Stay tuned. These two sagas are interwoven, Trump’s running for POTUS and Musk’s running Twitter wherever it finally ends up.