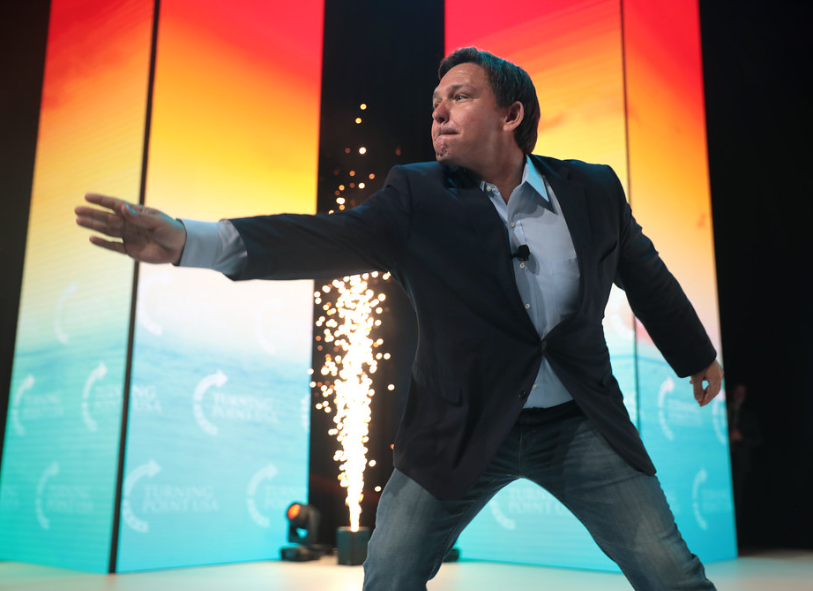 Blazing red is also the color of ketchup and Donald Trump will be throwing so much of it at the walls tonight, that they might as well hang canvasses everywhere and then try to sell the mess as modern art. Trump will flip when he reads about this in Politico:

Florida law requires anyone running for a new office to put in an irrevocable letter of resignation ahead of qualifying if the terms of the two offices overlap. The law was changed in 2008 to open the door for then-Gov. Charlie Crist to seek the vice presidency, but legislators reversed course four years ago and put back in a place a requirement that someone seeking federal office would have to resign ahead of the actual election.

The 2008 law did include a carve-out for someone whose term is about to end, but that would not apply to DeSantis. The carve-out allowed then-Gov. Rick Scott, who defeated incumbent Sen. Bill Nelson that year, to remain in office until the day DeSantis was inaugurated.

Renner said that proved state legislators had been “inconsistent” about the state’s resign-to-run law, and that was one reason he was open to changing it again.

It will be interesting to see how this law reads in final form and what the practical effect of it is. Will DeSantis continue to be on the payroll as governor when he’s out campaigning — especially at the end, when there is no argument but that running for president is a full time job? Or, will he, in the event of winning the office of president, be both a president and a governor? That would be interesting.

Or, maybe he could go back to Fasorida, when his presidential term is through and run for governor again, and then they could throw out all those pesky term limits laws.

Or, hey, I got it: how about when and if DeSantis is president, he just knocks out all the term limits there and hangs onto that office for life? And how much money you want to bet that this scenario has been gamed out, and not in jest?

And by the by, DeSantis has been rising in the polls as Trump has been falling. A Harvard CAPS-Harris poll that came out Monday showed DeSantis 11 points ahead of its previous poll and rapidly narrowing the gap between himself and Trump.

It’s going to get wild. You thought 2015 was a zoo. This primary is shaping up to be even wilder, still.