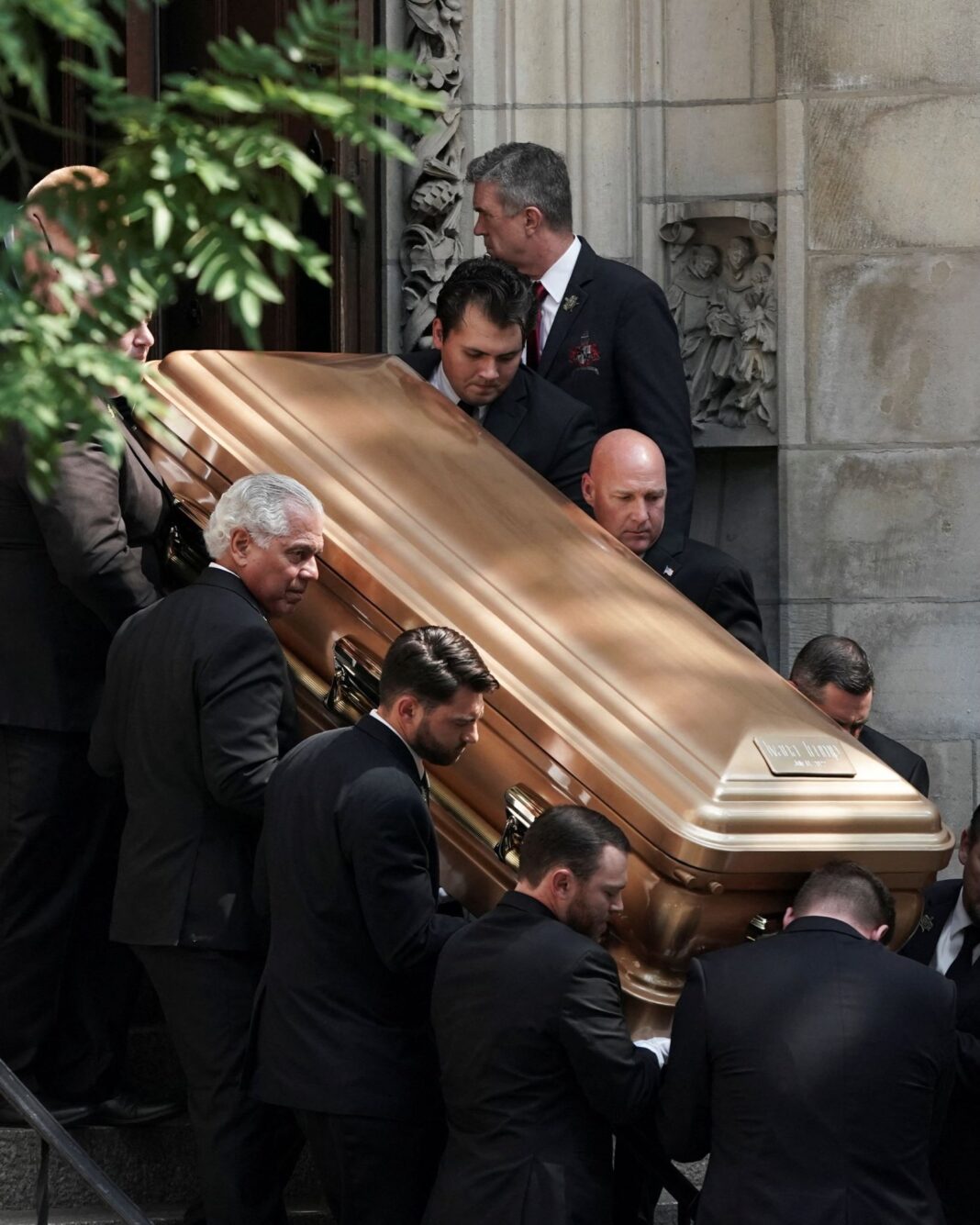 You guys know me, heh, I am as fair and as balanced an evaluator of the actions and motivations of the Greater Orange Shitheel and his slimeball progeny as one is likely to read in the labyrinthine sprawl of the lefty inter webs.

But, having spent much of my work life in various blue collar trades, lifting, carrying, schlepping, cursing and by other ways conveying heavy inanimate objects from one resting place to a more utilitarian other, I gotta say I am in complete concurrence with General Hospital’s Nancy Lee Grahn here… unless Ivana’s cremated remains were irradiated or in other ways toxic, necessitating her casket be lined in lead, there is no way that ten adult male pallbearers, straining and no doubt grunting, (check the guy at the bottom, trying to keep that box from going runaway train) were needed to lug her to her final resting divot.

Dear @FBI, I know u don't need advice from a soap star, but having been in 10 or 10k implausible storylines in my 37 yrs, may I recommend digging up Ivana. Cleary it didn't take 10 pall bearers to carry a liposuctioned 73 yr old who methinks was in her weight in classified docs.

When my husband was buried, the ground was flat and he was in a vault in a casket. Then they immediately put grass on it. It took weeks to get his headstone and this was in 1985. Not literally overnight. Almost like they had it in advance?

I suppose, Spitterwit, that a great deal of money, taken from Ivana’s estate (see below), could procure a headstone and customized casket (see header photo) in record time, but it is weird they didn’t have a bit of turf available for the photos…

someone who billed $152k for it to her estate, plus monthly maintenance fees and a tax deduction X3 plus a great 'safe' to hide his transgressions where no one could get them?

Anything that may have been buried with Ivana is most likely is in Saudia Arabia by now after the faux Saudi backed golf tournament in NJ. How else does one get classified documents out of the country- on jets with diplomatic immunity, of course. $2 billion paid/deliver made.

Disrespectful way to carry casket IMO. I thought you were supposed to keep them level

Well, you would have needed two Superfriends at the bottom to do that, Pat.

Talk to the Trumps, they're the ones who buried their wife and mother on a golf course

you guys sure are selective with your moral outrage

Really, when you think about it, would those kids really want their mother to rest on her ex husband's golf course? It never made sense. That autopsy and death cert. were signed pretty damn quick too. Perfect timing. Good plot line!

Wondering if they could do some kind of ground penetrating radar to scope what’s under the dirt without digging. It’s a tool that archaeologists use. pic.twitter.com/mGcX3lAE7s

The metal of the coffin would block the signal.

Spoilsport. We better grab a shovel, then…

It's not really that far fetched. pic.twitter.com/UQuouYibE8

Some people if they want to have an open casket visitation will get a casket, then after all services are done, they will be cremated. Of course, this is for normal folks, not necessarily the Addams Family.

Could be in one from, Ivanka who got a patent for coffins from China in 2017/18.While she was an advisor in the WH & right after rumpf did some trade deals. Which is even more messed up. It's too far fetched for a soap story…no one would believe it. Mob's going to mob

A patent for coffins? You know, Ima not even gonna fact check you Gina, that’s completely on brand and, frankly, just too damn funny to edit…

Take it from me, that’s a set piece waiting to happen.

I know something is really weird with all of that as in the fall the injury then I heard she was cremated also someone saw 2 of Trumps associates leaving her residence the front doors of complex, it's on their video.

That would have been Trump enforcer Matthew Calamari and his son, who were not only snapped leaving but also getting in Demon Spawn Eric’s ear…

Everything they are looking for is most likely buried here. pic.twitter.com/zLnJdB4s0e

Or not, Amara, if the Saudi’s jetted of the country after presenting the LIV tournament winner with his trophy…

On the left is the trophy presented at Trump's Bedminster course on Sunday at the LIV Golf professional tour, which is financed by the sovereign wealth fund of Saudi Arabia – Public Investment Fund.

On the right is an image of the Twin Towers building wreckage from 9/11. pic.twitter.com/RNHBGWM7ey

Whatever inhabits Ivana’s casket we are still talking about a real person so I’m gonna end on a high note:

Ivana should have been celebrated as a woman in her own right. After all, she kept that boat afloat for years. And this is how it ended for her? On the back lot of a golf course?

At least ‘til the Feds get an exhumation order.