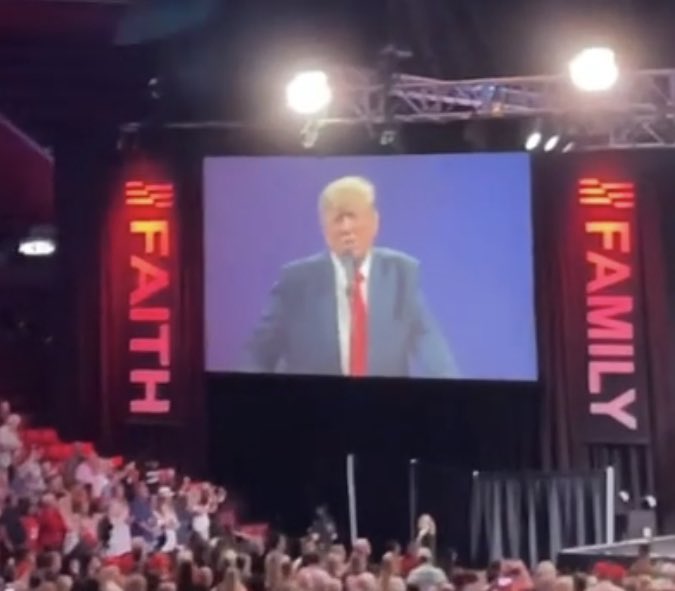 “What a fool believes, he sees.” — Doobie Brothers

Donald Trump held another one of his Two Minute Hate rallies this weekend. You know, the ones that go on for days, where his followers cheer on his relatives? Trump had another one of those this weekend in Florida and it was as unfiltered and vulgar as you would expect.

Kimberly Guilfoyle stood next to a gigantic blow up portrait of herself, which we suppose is better than jumping out of a cake, while Don Junior strutted and peacocked, claiming, “They’d throw you in jail if you chanted USA at a Democrat rally.” Eric did a photo op with Lauren Boebert. But the piece de resistance was Daddy dropping the “F-bomb” on the crowd.

Trump said other countries “didn’t f*ck around with us” when he was in the White House. pic.twitter.com/ndw9IliR1f

Here are a few other images, but what you’ve already seen is what took the cake.

Junior takes the stage today with James Brown’s ‘Living in America’ blasting. These people all paid money for this. pic.twitter.com/1l4BtPTpkU

Does she need attention much? Ya spose?

So this happened today … pic.twitter.com/Eqqtv6bSo6

And here was the scene where Trump took stage to give the stunning historical perspective you just heard.

This is a cross between Clockwork Orange, a Nuremberg rally, and a bad 80s hair band hanging on too long. pic.twitter.com/onaspDfyu6

Here’s what really happened when all was serene, when Trump had achieved “peace through strength.”

China demolished any semblance of freedom in Hong Kong while he was President.

He unilaterally surrendered to the Taliban.

The Iranians directly attacked a US military base.

Denmark laughed in his face when he proposed buying Greenland. https://t.co/EK6jPSAreJ 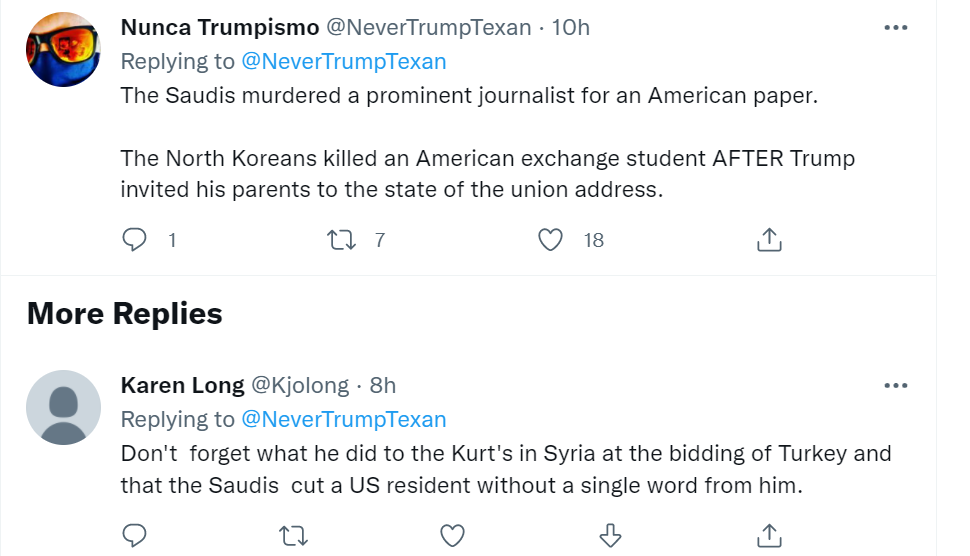 She means the Kurds and I think “cut” means amputating of a limb. They do things like that in that part of the world but this administration couldn’t have been bothered.

Here are a few other blasts from the past. This is what it was like with Trump in office, not the serene, respectful, awestruck devotion of the world that he imagines now was his due. But this.

The GOP was OK with this person having the nuclear codes.
“You know what uranium is, right? It’s this thing called nuclear weapons and other things. Like lots of things are done with uranium, including some bad things.”pic.twitter.com/PzLNfoOjWk

Donald Trump has made many statements that are pretty frightening about using nuclear weapons. I tried to find as many as I could in one video but there are a lot. https://t.co/Pjmoc2pgJR

That’s what it was really like. But Trump will continue his journey down both the rabbit hole and the memory hole because there is no way that he can ever face the fact that he just gave America away when he occupied the White House. And it’s common knowledge that if he had been elected to a second term that he intended to pull us out of NATO.