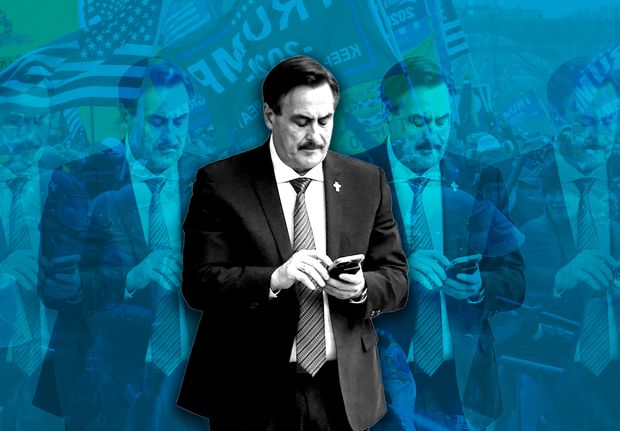 It’s high time that we start analyzing Mike Lindell’s unique behavior in psychological terms. If we are to believe the man, he has reduced his substantial personal wealth from $50 million to $25 million in the time frame of slightly over a year that he’s been pursuing his mad obsession that the 2020 presidential election was stolen from Donald Trump. That’s not normal on its face.

Add to that the fact that Lindell keeps announcing with regularity that he’s “now” got the evidence that will result in an overnight, revolutionary new election result and therefore a new America, and it’s no wonder people keep asking why some loving relative or friend doesn’t do a medical intervention.

Here’s Lindell’s latest. Now he’s going to send 300 million people to prison, which is all the people of voting age and then most people under 18 as well, in the entire country. Lindell was the same man who claimed “a billion” people would watch his cyber symposium, more than watched Elvis perform from Hawaii.

Mike Lindell has never been more confident about his plan to overturn the 2020 election: "We have enough evidence to put everyone in prison for life, 300 and some million people." Is he planning to imprison basically the entire US population? pic.twitter.com/UYfC1dR7V0

Now who is going to build enough prisons to hold the entire population of the country, or how a social structure like that would work, we’re not even going to attempt to address. And Lindell is oblivious, apparently, to what comes out of his own mouth and what his factoids actually translate as.

Here are excerpts from and a link to an article on Patreon by psychologist and doctor of jurisprudence Nick Carmody. This explains Lindell’s behavior within the framework of an addiction model.

Several years ago I started observing the parallels between addiction and political tribalism as marriages, friendships, and families began to implode over politics and Donald Trump.

Specifically, I started noticing the parallels between the effect that addiction has on relationships when those relationships (interventions) threaten the continuation of the addictive behavior/activity:

When confronted with a threat to the addiction, the addict will often cut the loved one out of their life, rather than cut out the addictive behavior.

This has occurred countless times over the last five years as people have cut family and friends out of their lives over politics.

For example, a daughter told me that her 80 something year-old mom told her that if Trump and the daughter were both drowning, she (the mother) would save Trump first, and the daughter, second, if at all.

This is one of many stories people have DM’d me looking for help.

Initially, the addiction appeared to be related to the outrage, anger, or fear.  But then I came across research explaining dopamine, which is related to the reward center of the brain, in terms of “subjective utility”.   This got me thinking about confirmation bias, and made me realize the “addiction” wasn’t to the outrage/anger/fear.  Instead, the addiction was created by repeatedly receiving a dopamine reward every time their subjective beliefs (bias) were confirmed by Rush Limbaugh, Hannity, Tucker Carlson, or whoever they plugged into…and the outrage, anger, and fear was merely the by-product of the addictive process.

But, as I explained on the Lincoln Project podcast, this addictive process may have a second, compounding factor to it because research has shown neuroanatomical regions associated with physically painful experiences exhibit increased activity when people experience social exclusion or separation, as I explained in this article about Qanon morphing into a religion:

“…the political polarization/partisanship problem actually goes even much deeper because research has shown there may be a physiological component: fMRI scans were used to show that neuroanatomical regions that are associated with physically painful experiences exhibit increased activity when people experience social exclusion or social separation. These findings indicate that it can literally become a *painful* experience when people disagree or speak out against groups of which they consider themselves to be members. This would seem to indicate that there are physiological components at play that cause people to prefer to be comfortably wrong (incorrect/uninformed), rather than uncomfortably right (correct/informed), when being right or correct would put them in contradiction with a group with whom they share an identity, or if being right or correct would threaten their group membership. If motivation or incentive for pain avoidance exists, it not only could conceivably create an aversion to objectivity or moderation, but it would incentivize groupthink, “collective narcissism”, etc.”.  Similar to speaking out against a group that people derive their identity from…..there may be a pain avoidance component involved with aversions to refuting a conspiracy theory, or speaking out against a belief the rest of the group believes/propagates.”

As mentioned above, dopamine is related to the “reward system” of the brain, and is involved in the pleasurable experiences related to sex, gambling, etc.  Dopamine is also associated with the high experienced with cocaine use/addiction.

With this as a backdrop, it’s conceivable to conceptualize political tribalism (and perhaps even cultism), through an addiction model….. where there’s a cocaine-like hit on the front end that lures them back into it….and a painful, opioid-like withdrawal that prevents them from pushing away from it.

Read the entire article. It’s a fascinating analysis of this general topic and you’ll see the points where Lindell and his MAGA cultists are addressed in spot-on fashion.  What Lindell is doing is not normal behavior for anybody and this might explain the pay off in it. It’s like gambling, somehow you’re going to beat the odds.

Or, maybe this is more like the rapture, the payoff is one that people will keep hoping for and hoping for until they’re in their death beds, still hoping for something that never came. Maybe at the end of their lives they imagine the opening up of the heavens and their ascension with the other 144,000 chosen ones, before it all goes black. Who knows? All we can say with certainty is that both the rapture and beating the house in a gambling venue have better odds than Mike Lindell’s fantasy succeeding.