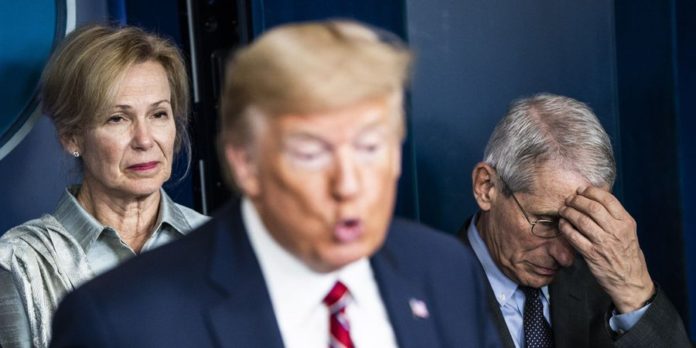 I have been wondering about this ever since November, but haven’t been able to find any actual data, but I just got a glimpse. My question has been what would be the negative effect of Trump being out of the picture when it comes to GOP turnout. And when you match it with what we already know, it makes perfect sense.

I apologize for not having the actual name of the poll, but I didn’t hear Joy Ann Reid mention the poll, just the results. But in talking about a different subject, she stated that a poll taken after Trump’s loss in November, as well as the GOP’s loss of the two Georgia Senate seats in January, found that one in five Republicans, or 20%, were less likely to vote in future elections than Democrats, who were only at 5%.

From where I’m sitting, this poll fits like a glove. You have often heard me say that there is a rock hard base of Trump supporters somewhere between 23-28% who were only in the game due to Trump. And once Trump was no more, and even worse he was on radio blackout to talk to his idiot supporters, they would crawl back under their rocks again. But there is other incidental evidence to support this.

Here’s a for instance. Back in 2019, Kentucky Governor Matt Bevin, who was fond of referring to himself as Trump before there was a Trump, ran for reelection for a second term. He lost. And I was all over it like flies on shit after the election, when post election analysis showed that in the far southwest and southeast portions of Kentucky, the vaunted coal country that was the wellspring of GOP strength, while still going overwhelmingly for Bevin, had GOP voter turnout that was 15-20% less than Trump carried those counties by in 2016. A massive Democratic turnout in the urban areas, along with a strong suburban white women’s backlash against Trump turned the trick.

But here’s one that’s even better. In November Trump narrowly lost Georgia, but in the Iron Counties of far north Georgia, Trump replicated his 2016 turnout model. And then came the special elections of January for the two Georgia Senate seats. And once again, on election night, like a dog on a pork chop bone, I was all over the fact that there was trouble in GOP paradise. As I reported, Steve Kornacki of MSNBC was saying that while those far north counties of Georgia were still going strongly GOP, the GOP voter turnout was down 15-20%! How many times do we have to see the same number keep popping up before we admit that it’s a pattern?

Trump actually boned the GOP in two different ways. The first is the one that I referred to above. There is a rock hard core of Trump supporters who are all in on Trump. You can’t fool them with slogans and endorsements, if it isn’t the Cheeto Prophet, then they just ain’t interested. But that’s only the half of it.

The second half is, in it’s own way even worse. In addition to that solid base of rock heads, there is a large base of lifelong, rock solid GOP voters who bought into Trump and his nonsense. And Trump turned to be too good by half with the bullshit. Trump spent months before the election convincing these voters that it was only rampant voter fraud that could rob him of victory. And after losing, he doubled down on it with more hysterical screaming, bolstered by more than 60 frivolous state and federal lawsuits.

And this is even more deadly to the GOP than the lost of the hard core Trumpistas. Because these are reliable GOP voters, and yet Trump managed to convince them that the democratic voting process is rigged! And if that’s the case, then why would they ever bother to vote again if the results are rigged against them? And the GOP has been so slavish in backing Trump’s numbskull play that they’ll never manage to convince the sheeple that it was all bullshit.

Leave it up to Donald John Trump, Pestquire. Only a moron with a room temperature IQ, who needs a valet to tie his shoes in the morning, could so totally fuck up a major political party to the point that it can’t get itself straightened out again. And the antagonist in chief will never do a thing to help to straighten it out. He loves the chaos too much. Don’t touch that dial.