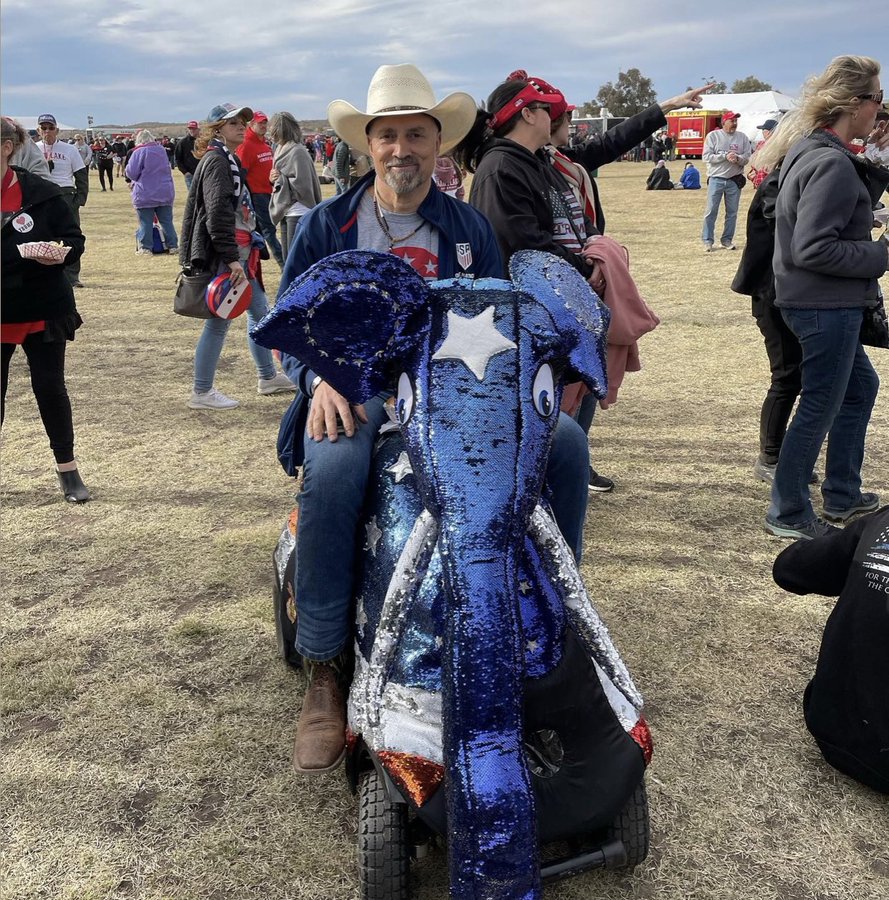 The Arizona MAGA Nation rally is as nuts as you would have expected. There are a lot of ugly images here today, but this one is particularly bothersome. A protester showed up and the Right Side Broadcasting reporter is simply giddy that this woman wearing a Biden shirt was handcuffed and thrown out of the rally.

This is a sad commentary on who we are as a people. Americans hate other Americans. This is what it was like in the mid 1800s when brother turned against brother, neighbor against neighbor. We’ve cycled all the way back to that.

Trump rally organizers have sheriffs arrest a woman in a Joe Biden shirt for saying things they didn’t like.

She also appeared to be the only one at the rally wearing a mask. #TrumpRally pic.twitter.com/Tsba00rZQi

So much for the party of free speech. Actually, she’s better off being removed from that scene. The MAGAs are nuts, they’re as likely as not to turn this into a scene from Day Of the Locust.* They are that crazy.

And then the Golden One took stage.

There you have it, ladies and gentlemen, the 2024 GOP platform, articulated for you by the frontrunner for the nomination. You can go into cryogenic freeze without concern now, you’re up on all the policies you need to know to be able to vote on election day, 2024.

Here he is slurring, bottom clip.

Trump: We never even heard the term supply change pic.twitter.com/ECJm7hM01O

And then he segues to conspiracy theory. He’s in top form tonight.

Trump pushes the fedsurrection conspiracy theory, ignoring that we all witnessed him organizing and inciting the January 6 attack on the Capitol. pic.twitter.com/1tmNfFxg7a

I think the bottom clip is supposed to pass for wit.

So when you can’t beat your wife, you beat a witch instead? Or you hunt a witch or hunt the guy who hunts the witch and then beat them both? Say, maybe Trump could use a witch doctor.  He needs some kind of professional help, that much is absolute.

He is completely fucking insane. How is this real life? https://t.co/lHTcQaGeHa

The crowd size keeps coming up. I guess the yous and mes are missing the entire point of what happened that day. We believe that the takeaway was the bloodiest day at the Capitol since 1814, Trump knows that the park was packed like sardines and that’s how he remembers it. And that’s all he remembers, evidently.

I have to drop this in here, because it’s so insane.

Newsmax correspondent to Ric Grenell: “Why does Donald Trump have such a strong following of, like it’s almost like a cult following.” pic.twitter.com/PeFmnl8TBO

I wish we could have heard the “ambassador’s” response.

Now this is pretty wild, even for Trump. Did you know that white people can’t get the COVID shots?

Trump’s got his facts confused on this one. DirectTV is dropping OAN. AT&T loves them some OAN, they sponsor it. But if Trump wants to encourage people to boycott AT&T because he has them confused with DirectTV, I think that’s swell.

Trump alludes to One America News Network getting dropped by DirecTV and laments that the channel is "threatened" by "the woke executives" at AT&T. He goes on to suggest people should boycott AT&T. pic.twitter.com/0lho5yV0g0

And now Trump waxes psychic. He knows who the hostage takers in Texas are. Okey doke.

Trump brings up the hostage situation in Texas and says ominously, "you'll see who it is that's holding so dangerously those hostages. I think I have a pretty good idea." pic.twitter.com/qsy0hWWMg3

I’m going to end this piece on that note. He started talking about Afghanistan at the end and I think the rest of the speech will be an anti-Biden tirade, and nothing new. If he says anything particularly bonkers, it will make its way into another piece.

** Day Of the Locust is an obscure reference. At the end there’s a crowd scene in Hollywood and a failed creative type goes nuts and stomps a small child to death. It’s a 70’s movie based on the novel by Nathaniel West.