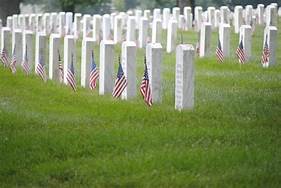 For most of my life, Taps made me feel grateful (if sad) for the fallen, and frankly for all who served and not just in uniform.   It was a reminder that whether here in the U.S. or elsewhere freedoms so many take for granted come at a cost.   Sometimes at terrible cost.  However people have stepped up and risked all, and some have paid in blood, limbs and with their very lives.   Taps is a haunting yet beautiful way to remind us of the service and sacrifice of those for whom the battle is done.   But ever since I heard the awful words President Donald Trump Taps has taken on a different meaning.   Even the election of Joe Biden who got eight million votes than Trump hasn’t changed things for me.   I was certain he’d get as many votes as 2016 which was bad enough, but him getting so many more in 2020 was like a knife to my guts.

After I got stationed at HQMC which at the time (1980s) in Arlington, VA I made it a point to attend the weekly evening parade at Marine Barracks 8 & I across the river in DC.  It was every bit as impressive as I’d expected, but the moment that still sticks with me is the very end, with the retiring of the colors (lowering the American Flag) which was in the mostly darkened space moving.   Then the lights cut out completely, but as soon as the first note sounded a spotlight appeared on a lone bugler up on the parapet as he played Taps.   I tried, but couldn’t completely hold back tears.   That’s how overwhelming it was despite all the times I’d heard it before including at the burials of people I’d known.

For decades after, I’ve thought again and again about not just that first time I experienced what’s shown in the video, but subsequent times attending the Evening Parade.   And Memorial Day?   I could write a couple of pieces on how it shaped me starting with it’s origins and the man (General John A. Logan) credited with getting the tradition of Decoration Day which morphed into what we call Memorial Day started being from my hometown.   How solemn the day is, and the gratitude that was my primary emotion became part of my DNA at an early age.   And so it was with the playing of Taps.  Consider the words which you probably know:

Day is done, Gone the sun

All is well, safely rest.

Well, all is NOT well and hasn’t been for a long time.   And God?  If there is a deity, whatever he/she is called I’m convinced it said “To hell with it” and left us to our own devices.  That after giving us so many chances to get things right, and to set us on the right course it was apparent it was hopeless.   Not that some warning signs and tests to see if we could recognize bad choices and choose wisely weren’t given.   Reagan.   Then Bush 43.   And if there is a God I can imagine him/her saying “What in the hell is WRONG with these people?  Are they THAT freaking stupid?   Are they that selfish, or self-destructive or both?  Fine.  I’ll give them a choice so obviously bad most people will recoil in horror from it.   This Trump guy.   Surely then they’ll come to their senses!  It won’t even be close, and maybe some sanity and cooperation will start to come back.”

Or maybe those who worship have been wrong all along and God is an asshole – the “cruel and vengeful God” Iago spoke of.   It’s not like the Old Testament didn’t suggest such a thing.   But let’s assume the bible is kind of right, and that New Testament stuff is God showing people the way.   Even God must have felt his/her patience sorely tried over time.  If you believe in God or some deity tell me you don’t wonder at the support he still has and think God just up and gave up on us.

The disdain and hatred I have for Trump and ANYONE who has voted for him, defended him, rationalized voting for him and so on is beyond measure.   So no, all is NOT safely well and God is definitely NOT nigh.   Now, hearing Taps evokes not pride of being born in a country where so many were willing to give so much (much more than I did), but grief.   That country is gone, and I fear will never come back even if we can diminish the forces/influence of Trumpism.   He should have been driven out of office by his own people long before his term was up.   And Memorial Day is a perfect reminder of the failures of people who might have done so.

“I don’t get it.  What was in it for them?” (Donald Trump to retired Marine General John Kelly at the grave of the latter’s son at Arlington National Cemetery)

Yes, on his first official Memorial Day when his then DHS Chief John Kelly tried to show Arlington National Cemetery to Trump, to get him to appreciate what it meant Trump actually said that as they visited the grave a Kelly’s son, a Marine officer who’d died in combat.   That Kelly didn’t knock that son-of-a-bitch Trump on his ass right then and there, then march over to the press pool and explain why he’d done what he’d done and was resigning right then and there says plenty about Kelly too.   None of it good!   But that is what our country had become and still remains.   A country in which enough Americans are willing to vote for someone like Trump.   Yes, only about 30 percent of the GOP worships him, but the rest put up with this kind of attitude for venal, selfish interests.   They might have held their noses (and would do so again even if Jesus was the Democratic nominee) but the voted for Trump.

Lest anyone think that Memorial Day comment from Trump was a one-time thing, let me remind you of the 100th Anniversary of the end of WWI when virtually all the world’s leaders gathered in Paris to celebrate the occasion.   The Battle of Belleau Wood which began in June, 1918 was a turning point in the War.   As a jarhead I learned quite a bit more about it than I’d learned in history classes in school growing up.   My point though is that the dead of the Battle of Belleau Wood are buried in the Aisne-Marne Cemetery adjacent to where the fiercest of the fighting took place.   It’s not just Marines buried there, but in the Corps it’s among our most hallowed ground.   Most of the leaders of the free world made the trip on November 10, 2018 to the cemetery to remember the battle and honor the fallen.   Trump blew it off, and even blamed the Corps claiming Marine One couldn’t fly in the “weather” which was a drizzle.   Most other world leaders drove up from Paris by car, less than an hour’s drive with their escorts clearing the way.   Once again John Kelly dishonored his son, the Marine Corps and the United States by NOT knocking Trump on his ass and immediately going to the press pool and explaining why.

The real point though is that Trump truly believes those who served are suckers and losers.  That’s all the more true (as far as he’s concerned) of those who gave their lives.  “What was in it for them?” he asked.   The answer is simple and something ANY person who loves them some Trump, or who contorted themselves into knots rationalizing hates to even contemplate but the fact is what was in it for them was to NOT have a country in which someone like Donald Trump could attain and wield power – especially not elected power and for damned sure not the Presidency!

So in a way Trump was right.   We all were/are suckers.   My counselor last week suggested I should focus on the fact Trump, or someone like him wasn’t in power back when I joined up.   But people were even then scheming to create the conditions for a serious of useful idiots would wind up in the White House.   Reagan.  Then Bush 43.  And then Trump.  Each one worse, and if you think we can’t get worse than Trump think again.  The GOP establishment will bow to the MAGAts out there and no matter what prop up someone new as bad or worse (DeSantis for example) as Trump.

Against all that, how can I remember and be thankful for those lying under gravestones in our national cemeteries, or in countless cemeteries around our country and on foreign soil where they fell today?   It hurts that my own service, mundane by comparison has been dishonored by half of my country.   But it’s devastating to think of people like my father who went to extraordinary lengths to hide the numerous scars on his torso from WWII.   Or others from my hometown, including a quite man who almost never spoke from my church who I wouldn’t learn until I was in college survived the infamous Death March at Bataan and suffered through years of appalling captivity.   And other from that and subsequent wars and conflicts.   Sometimes some of the people I’ve known have died in service of this country.

And again I say when roughly half the electorate is willing to vote for someone like Trump, if not enthusiastically but still willing I weep for what we’ve turned in to.

So, late in the evening on this Memorial Day Taps is for my fallen country.  Except as I’ve already said, all is not well and God is not nigh.   Far from it in fact.