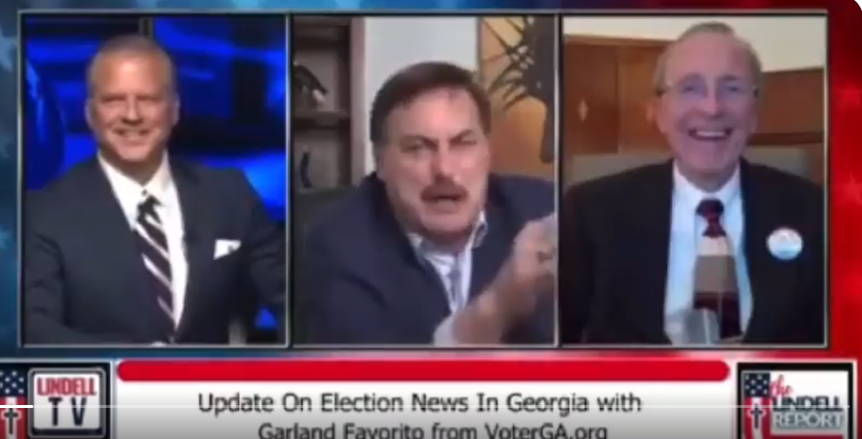 Maybe Don Junior and Mike Lindell have the same drug dealer. They certainly are exhibiting symptoms of being loaded and manic this week, that much is certain. Just play their tapes side by side, see what you think.

Lindell has a checkered and troubled past with Fox News. Even though he gives the Fox corporation money for advertising and they take it, they won’t broadcast his stolen election madness, opting to stay out of the crosshairs of Dominion and Smartmatic, territory which Lindell not only doesn’t avoid but goes directly to the center of and jumps up and down for attention on a regular basis.

Here is Lindell, obviously frustrated and seemingly under the influence, I think that’s a safe observation to make, declaring that he’s found an answer to his quandary: hack into Sean Hannity’s show and just air the evidence, so what?

Mike Lindell went on an insane, manic rant tonight. He says that since Fox won’t run any of his “evidence” of voter fraud (lawsuits), he is going to have his cyber experts hack Sean Hannity’s show and air it during his time slot on Fox. pic.twitter.com/g5RhJCKJKt

We are pretty sure that if any of the legal people at Fox see this, they’ll probably think it’s a great idea. I mean, how effective have Lindell’s so called cyber experts been with anything else, right? So Fox executives will sleep well tonight, knowing that clueless crew is on the job to hack their network. If the threat was to drag two talented high schoolers with a screw driver away from Teenage Mutant Ninja Turtles for half an hour to hack Fox, that might have gotten their attention, but Lindell’s crackerjack team? Nah.

And here’s somebody else in Lindell’s circle who’s not doing so well, either. This is Tina Peters, the former Mesa County, Colorado clerk who just got arrested for resisting a search warrant. These lower level Trumpkins all make the same error. They think they’re going to walk, because they’ve seen all the big boys and girls walk. No. It’s not going to happen that way. Here’s Tina Peters getting a hard lesson in life.

UPDATE: Republican Mesa County Clerk Tina Peters appeared to attempt to kick a law enforcement officer while struggling with police during her arrest. This is video from a witness. pic.twitter.com/TILJ1198BV

I wonder if Lindell will see his way clear to show this on his TV channel? 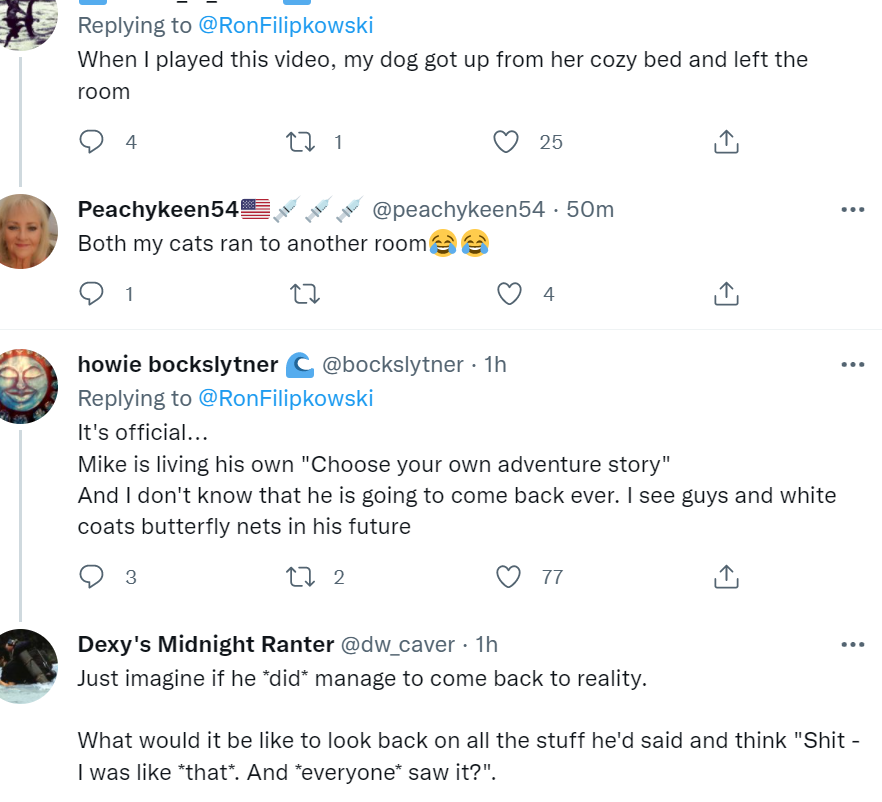 Animals don’t like crazy, that’s a fact. They hear human crazy and they leave.

Another day ending in a y, and there is more unreality chez Lindell. This is where living in a fantasy gets you.

And Lindell is really going to be in trouble when he gets put on the 72-hour hold. To get himself taken off the hold and released, they’ll have to ask him to do simple cognitive exercises, similar to Trump’s person, woman, man, camera, TV extravaganza, and then they ask a simple question: “Who is president of the United States?” When Mike flunks either or both, in he stays.

And they won’t be impressed when they hear him brag how he alone has the inside scoop on this international conspiracy to overthrow the presidency. They’ve got guys bouncing off the walls in rubber rooms who think they’re Napoleon. Lindell will be just one more loon in lockup.