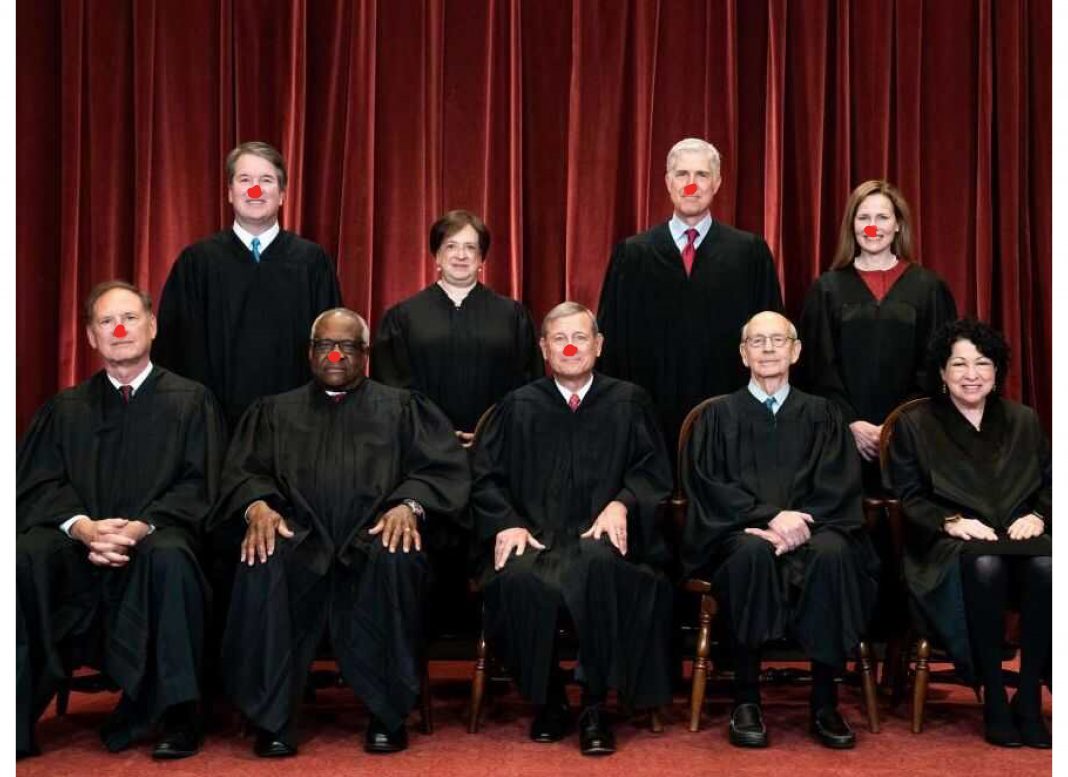 And if that day was ever coming, it arrived today. And though we’ve known that it was coming for weeks that it was coming, now that it’s arrived, the impact is even greater than I thought, due to it arriving as a twofer.

In one fell swoop, the Democrats have just been handed not just one, but two primo, high passion and motivation campaign issues to run on in November, and they’ve already been running on both of them, laying the groundwork. At the same time, the GOP has absolutely no new enthusiasm being generated after today, and in fact may see some erosion in voter enthusiasm.

The first and most obvious motivational tool today was the court finally coming out and officially overturning Roe v Wade. We’ve known it was coming for weeks now, but nothing says finality quite like the judge actually signing the divorce papers. And today turned out to be the day.

I sure hope that the Nine national ninnies in black muu-muus brought their PJ’s and toothbrushes, cuz it looks like an extended sleepover. I just saw air footage, and the Supreme Court is literally surrounded for what looks like 2 blocks. The National Guard could roll out a tank, but I think the protesters would just lie down in front of the treads. I’m just glad I’m not the Uber Eats driver delivering there today.

Biden nailed it this morning when he said Roe is now on the ballot in November. I’ve already gotten 2 texts from the DNC today mooching for cash. And the GOP is only going to help the Democrats all the way to election day by loudly passing new restrictive abortion laws in state after state. Talk about motivation.

The second turning point is more subliminal, but may well prove to be equally critical. Last night the Senate passed the gun reform bill 65-33. An hour or so ago, the House passed it with 14 crossover GOP votes. Biden can sign it whenever he wants. I just hope he has Fred Guttenberg on the stage and hands him the pen.

This bill is like a helicopter flying over the island Biden’s been stranded on. Biden can honestly claim a decisive bipartisan accomplishment. His poll numbers are going to go up on the strength of that bill alone. But it’s more important than poll numbers.

One can argue that the spell of invincibility of the NRA is broken after almost 30 years. But while everybody has loudly praised the accomplishment, everybody also agrees that it’s only a first step, that more must be done. And the Democrats can, and I believe will run on that like Usain Bolt. They can run on promises of more substantive follow up legislation if more Democrats are elected to congress in November.

But the GOP can’t! They gave the Democrats a golden gift, and got nothing in return. I wrote previously that the now 15 GOP Senators and 14 House members who voted for the bill did so because they could! They looked at polling, and public and constituent sentiment, and realized they wouldn’t pay a political price for siding with the angels for once.

But they can’t run on it. They can’t flaunt it on their websites, they can’t brag about it in campaign speeches, and they can’t raise money off of the vote. For one very simple reason. Because the majority of the GOP is still Pepe LaPierre’s lap poodle. And rubbing the NRA’s and GOP’s noses in their defection could have consequences.

There you have it. In one day, the Democrats have been handed two prime motivational gut issues to run on all the way up to election day. And they can run on both all the way, because the GOP will flaunt the abortion issue, and sadly, there will be more mass shootings. Now they just have to run with it.