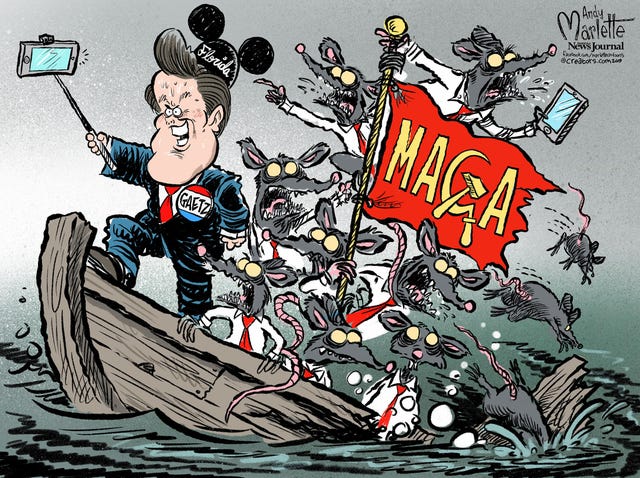 I don’t know if the bookies are taking bets yet, but if they are, the bet is not if, it is only when. There is no if. After today’s New York Times revelation that Joel Greenberg has been cooperating in the investigation since last year, there is no question but that Matt Gaetz is gone. He has blustered and preened and said that he wouldn’t resign, but all that pales in the face of a cooperating witness, whose cooperation would not be revealed unless he had made damaging testimony about Gaetz and it was corroborated.

Long story short…
Matt Gaetz will go to prison before Hillary ever will.

Hey QAnon, why aren't you after Gaetz?

Matt Gaetz has a minor problem.

In addition to Matt Gaetz and Florida Republican Joel Greenberg, there’s at least one other unnamed Republican official involved in this sex trafficking ring. This is a scandal with boundaries that are still growing. And it’s not going to stop with Matt Gaetz.

And through it all, you notice that El Caudillo de Mar-a-Lago is silent.

Matt Gaetz will be gone next week because: