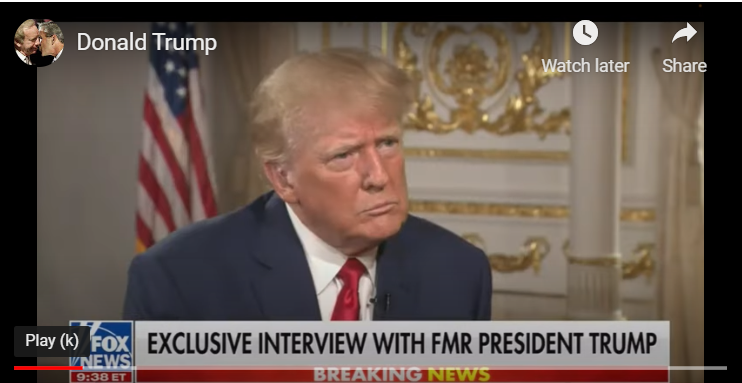 Donald Trump has become self parody. That happens sometimes. Howard Hughes was always a famous germaphobe, like Trump, but at the end it took it to extremes that even people who had known him for decades said were ridiculous, with rubber gloves, boxes of tissue and blackout curtains.

Trump just hit a similar bottom on Fox News. It’s intriguing in the first place that he even showed up on Sean Hannity’s show. That’s been a long time coming. It was February or thereabouts, when Trump made his last appearance.

But Fox News must have decided that since the hottest news story of the day is indisputably Donald Trump, that they would forego any other considerations and interview him. And it is a doozy.

What’s that you say? Didn’t the 11th Circuit Court of Appeals rule only today, “declassification argument is a red herring because declassifying an official document would not change its content or render it personal.” Uh, yeah. But this is Fox News and Trump is all out of gas. He’s slowing down to a sputtering, smoking hulk of a stop, politically speaking.

But since the ball is in play anyhow, let’s run with it, shall we? Trump seems hell bent on arguing that declassification HAS some meaning, so let’s talk about that. Hannity asked about the process and Trump said that basically you could do it with your mind, just by thinking about it.

Wow. That’s like God. God speaks the Word and behold, whatever he spaeketh comes into existence. And Trump doesn’t even need to speak, he can just think about it.

What else can a sitting president do just by thinking about it? Treaties, maybe? That would be good. “Sir, we just got invaded by Russia.” “That’s impossible, I was just thinking of a treaty between Vladimir and myself a few hours ago. That’s the news you need to run with.” “Yes, Sir.”

God help us if you can declare war just by thinking about it. Man, that could get sticky. And think of the scientific application of all this. Is the speed of thought faster than the speed of light? I have no idea. I’m just a humble blogger who finds herself constantly writing about things which are progressively more and more insane and it’s been going on for years now.

See this for what it is. Trump is mentally unstable and what few drops of dried glue are holding him together won’t last too much longer. The man is nuts.