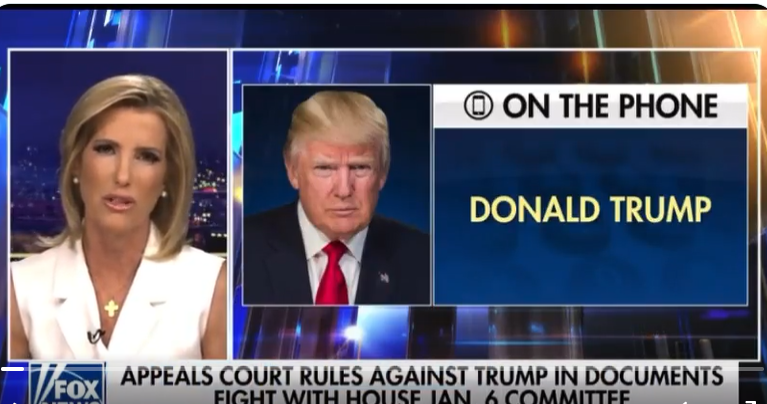 It has been a brutal week for Trumpty Dumpty. Next week doesn’t look to be shaping up so well, either. Mark Meadows will be cited for contempt of Congress on Monday, Tuesday at the latest. Trump lost his case with the U.S. District Court  and then the Court of Appeals and so the big question now is, will that matter go to the Supreme Court? That is extremely doubtful, the reason being that the three appellate justices were not only unanimous in their verdict, they were also very clear on the law. If there is some glaring issue that needs to be resolved in an expedited fashion by SCOTUS, nobody has noticed it.

At least nobody in the real world has noticed it. Over at Fox News, of course, hope springs eternal and fantasy is the order of the day, so Laura Ingraham jumped on the topic. Her framing of it was, “Will your three Supreme Court appointees uphold your request for executive privilege?” She didn’t say, “Because if they don’t you’re screwed, blued and tatoooed,” but that’s the case.

Here’s the epic exchange between Ingraham and Trump.

Trump: The panel of judges that were talking about didn’t exactly like Trump… Nobody was killed here other than Ashli Babbitt pic.twitter.com/IIsdhSQ07r

Ingraham: Liz Cheney is saying you’re just trying to hide, obfuscate, and delay because the documents released will be bad for you…
Trump: Liz Cheney is down about 25 points in her district. She wants to go to war with everybody… She’s a warmonger… She’s not a Republican pic.twitter.com/1SqCbfuldj

In the dimension where I live, I know I heard Trump say, “You have to fight like hell or you won’t have a country anymore.” That’s now an example of extremely calm prose. Hoe kay.

Here’s what we know as one week ends and another will begin:

And take a look at this.

Today's 68-page ruling from the DC Court of Appeals rejecting Trump's claim of executive privilege should be read in its entirety.

It's about more than Trump's claim of privilege — it's a clarion call for investigating what happened on Jan 6https://t.co/RlAKFQ2ZMk

Stay tuned. But unless some other jack jumps out of a box somewhere, these points above are dependable. There’s not a lot of wiggle room. I don’t want to say “the walls are closing in” but let’s just say it’s for damn sure that Trump’s options are not expanding.