What you’re about to see is distracting. It is visually and viscerally distracting. Jeanine Pirro is on Fox News discussing Donald Trump’s reaction to the release of the somewhat redacted affidavit — and that was more childlike than you would imagine, even for him. You’ll see that below.

I honestly don’t know what Pirro is doing here but it goes without saying that wisecracks about “going cold turkey” and “having the shakes” are making the rounds.

Judge Janine: “Obstruction? You can’t have obstruction of something that’s not a crime!”

I’ve had over a 1000clients charged with obstruction of something that’s not a crime. There are countless different ways this happens. Maybe read any obstruction statute before going on air. pic.twitter.com/Hiv2JvDcbe

What is the vibrating paperwork all about? She’s going to kill the words on the paper if she just shakes them hard enough? Dear God.

Here is Alan Dershowitz’s two cents worth, or twelve seconds, in any event.

It’s too much out of context to really know what he’s saying so take it with a grain of salt.

Here is a See Spot Run level explanation of where Trump stands.

Even with about half of its 38 pages blacked out for security reasons, the Justice Department’s affidavit to get a warrant to search Donald Trump’s residency at Mal-a-Largo is more damning than many of the former president’s critics expected. […]

It is still a mystery why Trump packed away these documents and had them shipped to Mar-a-Lago—a bigger mystery still why he resisted giving them back for so long.

Trump filed a legal motion this week, arguing that, as president, he had the right to declassify any classified documents and that his continued possession of the material was based on “executive privilege.” A judge should have no problem dismissing both arguments. First, while a president can declassify documents, there is a process for doing so; at the conclusion of the process, the special classified tabs and markings would be removed. Yet the tabs and markings are still on the documents retrieved from Mar-a-Lago. Second, mere possession, much less declassification, of some documents, such as those marked OCORN, must first be approved by the originating agency. That doesn’t seem to have been done either. Third, a president—certainly an ex-president—has no executive privilege to hold documents that properly belong to the National Archives.

Finally, mere possession of these documents is a crime under some of the statutes cited in the affidavit, whether or not they are classified.

There is much that we still don’t know. But one thing is, or at least should be, clear: Trump is in a heap of legal trouble.

As promised, this was Trump’s infantile reaction. 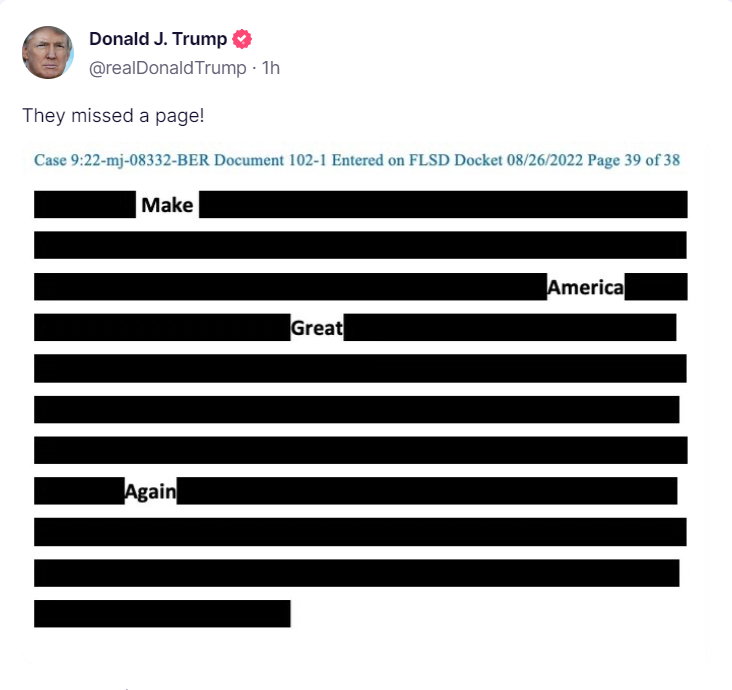 I guess Trump thinks this is clever and not juvenile. 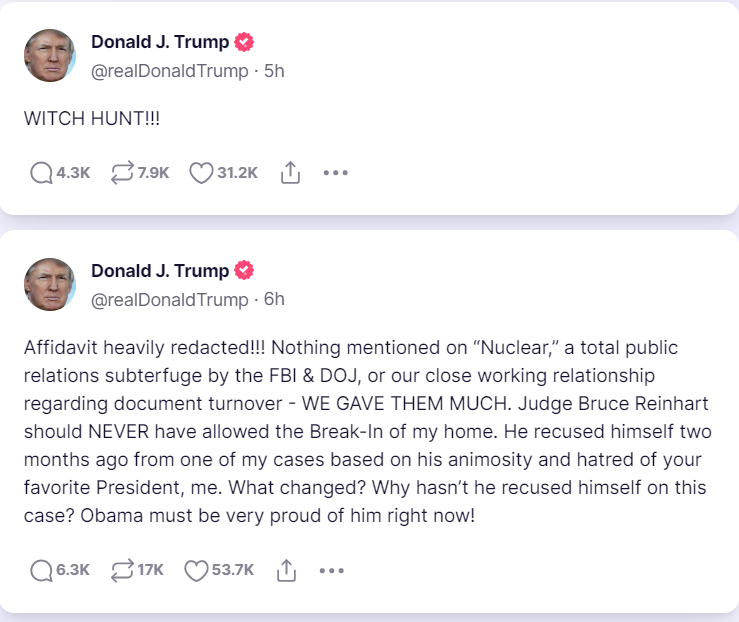 He’s not going to bluster his way out of this one. You have to wonder if that realization has dawned or is he still the old Trump, thinking he can stiff somebody, throw somebody under the bus and he, himself, will be fine? Wake up, Donny, it’s a new day. In fact, it’s a new world.