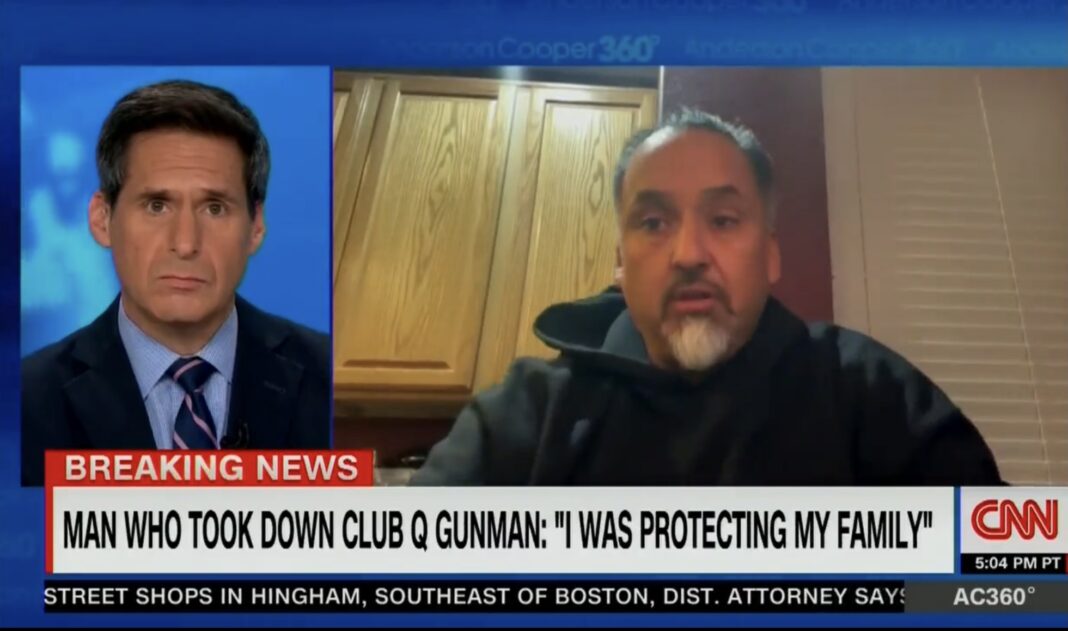 Greater love hath no man than this, that a man lay down his life for his friends.

As the killer strode into Club Q last Saturday night leaving five patrons dead in his wake, Army Veteran Richard M. Fierro thought only of his family and friends. The unarmed, twice decorated Bronze Star recipient leapt to his feet and charged the shooter and subdued him, pistol whipping the killer with his own gun until he was unconscious and saving only God knows how many lives.

Richard M. Fierro was at a table in Club Q with his wife, daughter and friends on Saturday, watching a drag show, when the sudden flash of gunfire ripped across the nightclub and instincts forged during four combat deployments in Iraq and Afghanistan instantly kicked in. Fight back, he told himself, protect your people…

…It was a staccato of flashes by the front door, the familiar sound of small-arms fire. Mr. Fierro knew it too well. Without thinking, he hit the floor, pulling his friend down with him. Bullets sprayed across the bar, smashing bottles and glasses. People screamed. Mr. Fierro looked up and saw a figure as big as a bear, easily more than 300 pounds, wearing body armor and carrying a rifle a lot like the one he had carried in Iraq. The shooter was moving through the bar toward a door leading to a patio where dozens of people had fled.

The long-suppressed instincts of a platoon leader surged back to life. He raced across the room, grabbed the gunman by a handle on the back of his body armor, pulled him to the floor and jumped on top of him…

As he held the man down and slammed the pistol down on his skull, Mr. Fierro started barking orders. He yelled for another club patron, using a string of expletives, to grab the rifle then told the patron to start kicking the gunman in the face. A drag dancer was passing by, and Mr. Fierro said he ordered her to stomp the attacker with her high heels. The whole time, Mr. Fierro said, he kept pummeling the shooter with the pistol while screaming obscenities.”

The article is unlocked, if you haven’t already read it you should.

But I think I can quote a bit more, to give you the full picture of who this hero is:

“It was Mr. Fierro’s first time at a drag show, and he was digging it. He had spent 15 years in the Army, and now relished his role as a civilian and a father, watching one of his daughter’s old high-school friends perform.

“These kids want to live that way, want to have a good time, have at it,” he said as he described the night. “I’m happy about it because that is what I fought for, so they can do whatever they hell they want.”

And here is his story in his own words:

Thank you so much for your bravery and heroism, Richard.

I can see how heart broken you are for the friends you could not save, but take comfort in the knowledge that if not for your actions many more would have died.