Trumpty Dumpty must have woken up on the wrong side of the bed this morning. Maybe it’s that lousy MyPillow that Mike Lindell gave him. Or, more likely, the negative press from his LIV Golf Tournament and the dreadful photos of himself that have circulated on the internet are what’s got his goat.

Naturally, he has to lash out at Biden. Here’s what that looks like.

And then he went on to vent his spleen on Wisconsin Assembly Speaker Robin Vos, for not being able to perform the requisite miracle needed, we guess. 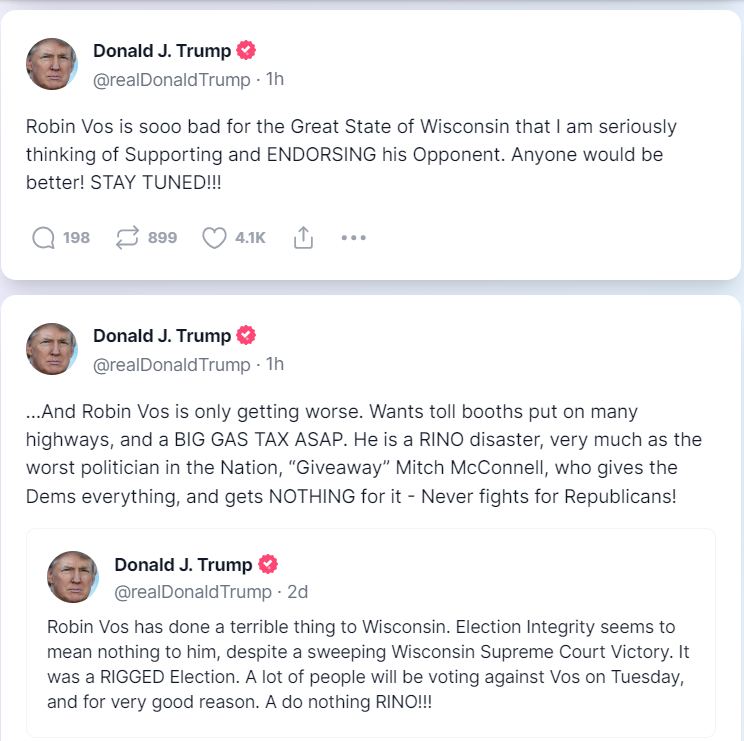 Trump is miffed at Vos because he wants the impossible. The state Supreme Court ruled on July 8 that most absentee ballot drop boxes in Wisconsin are illegal. The ruling addresses future elections, not the one Trump lost in 2020 by more than 20,000 votes in Wisconsin, but Trump doesn’t want to hear that. The Washington Post reported that Trump called Vos mid-July and wanted him to decertify the 2020 election, that magical word.

And there’s a resolution kicking around the state assembly seeking to undo the 2020 election results.

Point being, Trump won’t get off the Big Lie. That is his platform. That is also his Waterloo, but he’s too stupid to see it. It’s also going to be democracy’s Waterloo if enough Republicans continue to support it and poison enough Americans minds about the security of our elections. That’s our problem.